Love on the docks 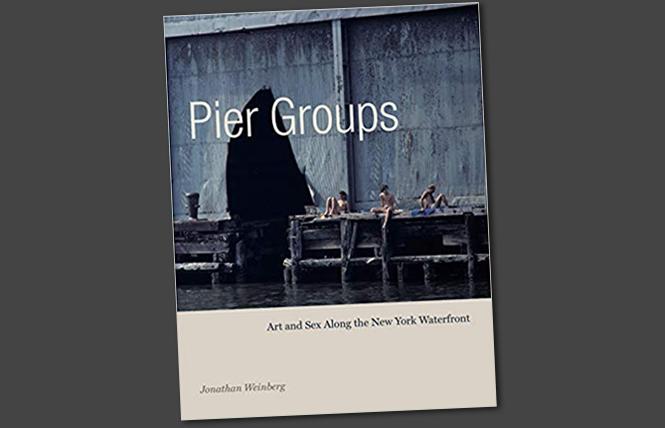 A far cry from the sanitized, homogenized, tourist-friendly locale it is today, the area around New York City's West Village piers in the 1970s was a hidden, secretive enclave where anonymous gay sexual activity was rampant, nude sunbathing was celebrated, and offbeat, radical works of queer art were created and appreciated.

Jonathan Weinberg, an instructor at the Yale School of Art and the Rhode Island School of Design, commingles vintage photography, anecdotes, interviews, and commentary into "Pier Groups: Art and Sex Along the New York Waterfront," an art history book deceptively engrossing and undeniably haunting.

First conceived in 2002 when Weinberg was an artist-in-residence at the Getty Research Institute, the book is the culmination of 16 years of research, inspired by several art exhibitions focused on the New York waterfront and Pier 34 specifically.

Weinberg's own experiences shape the direction of the book's narrative. The author admits to being "a denizen of the waterfront and a member of the queer subculture" in the late 1970s. "In my late teens," he confesses, "I began to frequent the gay bars lining Christopher Street and leading down to the docks. I sketched and made paintings based on the very same crumbling piers." Though it appealed mainly to gay men, this was a place for a certain type of sexual person, since "finding sexual partners along the waterfront was highly competitive and often frustrating, dangerous, and dispiriting." Physically, the location didn't amount to an orgasmic utopia, either. "Writing and photographs, no matter how vivid, cannot convey the stench of excrement and garbage on a hot, humid July afternoon on the piers." While the pier scene was liberating for some and dehumanizing desperation for others, for him, "it was both abject and exhilarating."

His book spotlights many enterprising artists like Gordon Matta-Clark, whose art installations reflected the beauty of abandoned spaces like the piers and captured the desire and the community of the men who frequented their collapsing buildings and warped wooden pilings. And there are many others who found themselves inspired by the sexual freedom experienced on the waterfront.

Authors like Samuel Delany describe an "initiation" that must occur for gay men to lose their inhibitions and fully embrace and enjoy the moments of "instant sex" that took place on the piers. Also featured are artists David Wojnarowicz (AIDS activist, performer, painter) and Tava (a.k.a. Gustav Von Will), who spraypainted phrases and graffiti across the dilapidated walls of Pier 46, including a two-story-high painting of nude men grabbing their erect penises. Moments of levity include an interview with photographer Arthur Tress, who recalls trying to chat with men cruising the docks for his work, only to be met with irritation since these guys weren't there "to talk to people."

Also frequented by the cruising gay men of the waterfront were the meatpacking trucks that parked in long lines and emptied out at dusk, which were then discreetly turned into shadowy locations for spontaneous sex.

There is much more included in these pages: visuals and stimulating text that will be a fascinating surprise to younger readers unaware of the activity in 1970s gay Manhattan. For older readers who remember this era of danger, sex, desire, and public cruising, the book is a time capsule from a bygone era where on the fringes of a vibrant city thrived a microcosm of the gay community where sex and art reigned supreme. Though the dockings and piers are decades gone, the memory of what used to be remains, when significant, celebratory books like Weinberg's pay homage to it.