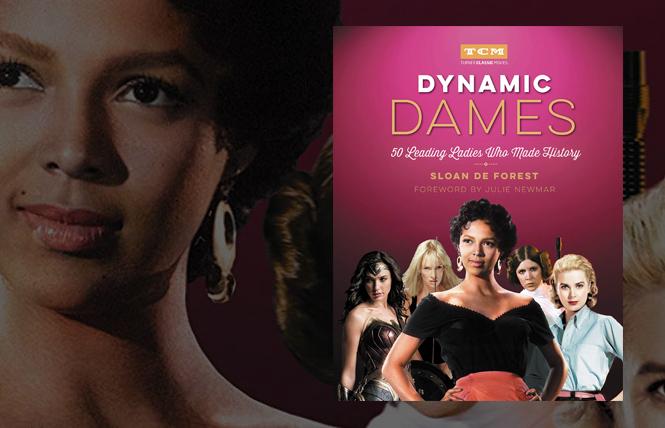 During most of the Hollywood studio era (1925-60), women made up the majority of movie audiences. "Women's pictures" were a popular and profitable genre, even if the male moguls who ran MGM, Warners, Paramount, Columbia, Universal, and RKO were condescending about it. Expert comediennes and compelling dramatic actresses thrived. Their legacy was potent, and as Sloan De Forest shows in TCM's "Dynamic Dames: 50 Leading Ladies Who Made History" (Running Press, $23), today's gifted actresses continue to make noteworthy films, even if males are now the target audience for commercial pictures.

De Forest has organized the book according to broad categories such as "Pre-Code Bad Girls," "Ladies Who Laugh" and "Superheroines." The categories are of interest, but the choices of actress/role within them don't always work. Thus, "Women of Mystery" includes Ingrid Bergman in 1944's "Gaslight," during which Charles Boyer tries to convince her she's insane. A better selection would have been Bergman as "Anastasia" (1956), in which viewers wonder if she really is the Romanov Grand Duchess who miraculously survived being murdered by the Bolsheviks during the Russian Revolution. Still, this category does include the intriguing choice of Joan Fontaine as 1943's "Jane Eyre."

Taylor's "Cleopatra" (1963) is among the "Reel Role Models," but a more inventive selection would have been her Martha in "Who's Afraid of Virginia Woolf?" (1966) as one of the "Big Bad Mamas." Predictably, that category is headed by Crawford's "Mildred Pierce" (1945), but why not have listed her in "Possessed" (1931) among "Pre-Code Bad Girls?" (She is cited in that role/category in the appendix.) On the other hand, Anne Bancroft's Mrs. Robinson in "The Graduate" (1968) is a refreshing choice for this category.

In "Gentlemen Prefer Blondes" (1952), Monroe established herself as an expert comedienne, so her omission from "Ladies Who Laugh" is hard to fathom. As Lorelei Lee, she proved that beautiful girls could have brains, be powerful, and find love and wealth in the same man. Fortunately, the category does include Katharine Hepburn in "Adam's Rib" (1949) and Melanie Griffith in 1988's "Working Girl." Nonetheless, in addition to Monroe, readers may wonder why Bette Midler, Diane Keaton, and Goldie Hawn were not collectively named for "First Wives Club" (1996).

Many selections, however, are excellent. Norma Shearer's "The Divorcee" (1930), Stanwyck's "Baby Face" (1933), and West warning "I'm No Angel" (1933) are perfect for "Pre-Code Bad Girls." It's hard to fault Carrie Fisher's Princess Leia in the "Star Wars" films (beginning in 1976) as the first entry under "Superheroines," or Roberts' "Ellen Brokovich" (2000) under "Reel Role Models," which also includes Audrey Hepburn in 1959's "The Nun's Story." Angela Bassett as Tina Turner in 1993's "What's Love Got To Do with It" is an inspired choice under "Strong Survivors."

"Fatal Femmes" begins with Hedy Lamarr in the forgettable "Dishonored Lady" (1947) rather than her "Samson and Delilah" (1949). Better choices would have been Bacall in "The Big Sleep" (1946), Hayworth as "Gilda" (1946), or Kathleen Turner generating "Body Heat" (1981). But De Forest redeems herself by including Lupino in "Road House" (1948). Naming the sexy Dandridge's "Carmen Jones" (1954) in this category does credit to a film landmark. She was the first black woman nominated for a Best Actress Oscar. Dietrich in "Witness for the Prosecution" (1957) is another terrific selection.

Each entry is accompanied by an informative essay about the actress' career, how she landed the role, and interesting gossip. For example, Rosalind Russell, the first name under "Ladies Who Laugh," was cast in 1940's "His Girl Friday" only after Ginger Rogers, Irene Dunne, Claudette Colbert, Jean Arthur, and Carole Lombard turned the part down.

A thoughtful appendix lists other actresses/roles that fall into De Forest's categories, although with the exception of Crawford, no star is listed more than once. Julie Newmar's Foreword is a revealing, witty account of the women who were her heroes, and why she was influenced by them. Her examples are excellent, and she herself continues to hear from fans who admired her as TV's strong "Catwoman."

De Forrest's Introduction provides a compelling rationale for the book's importance. "Powerful women have been part of the movies since the very beginning, both on camera and behind the lens." Among the early examples she mentions are France's prolific Alice Guy Blache, who began directing in 1896, and Hollywood's Mary Pickford, not only the most popular star of the Silent Era, but one of the founders of United Artists and the head of her own production company. She explains some omissions, de Havilland and Rogers among them, because she was limited to 50 stars.

As with all TCM/Running Press publications, "Dynamic Dames" is lavishly illustrated and printed on top-quality paper. De Forest has succeeded in stimulating the general reader and provoking intense discussions among film buffs.