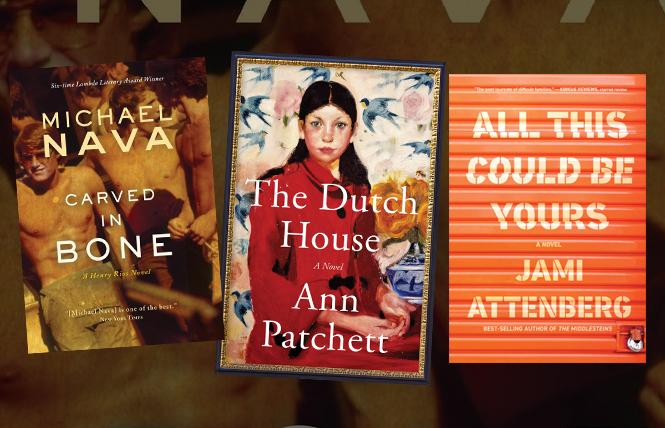 Making its paperback debut in time for autumn, Rebecca Makkai's acclaimed third novel "The Great Believers" (Penguin), a National Book Award finalist, more than lives up to the hype in the way that it stunningly tells the story of a group of gay friends in Chicago, and the impact that AIDS has on them during the 1980s and beyond.

A few years before Makkai wrote her loving portrait of the gay community, another straight female novelist, Ann Patchett, created the unforgettable AIDS novel "The Magician's Assistant." Patchett's new novel, "The Dutch House" (Harper), set on the outskirts of Philadelphia, follows devoted siblings Danny and Maeve, "helpless captives" of their "migratory patterns" from childhood through adulthood, over the course of a series of devastating events.

One of the most talked-about books of the fall, "Juliet Takes a Breath" (Dial) by Gabby Rivera, is the no-holds-barred story of "Puerto Rican baby dyke" Juliet, who leaves the Bronx behind and reinvents herself in Portland, Oregon, doing an internship with feminist author Harlowe.

Set against the backdrop of the early-2010s Occupy Movement, Caleb Crain's second novel "Overthrow" (Viking) is as exhilarating as you might imagine, as grad student Matthew falls for activist Leif and finds himself being swept up in the current of the times.

Moving back and forth in time, from 1816, when Mary Shelley was writing her novel "about a scientist who creates a new life-form," to present-day Brexit Britain, where transgender doctor Ry Shelley has fallen for professor Victor Stein, a leading expert on AI, lauded lesbian novelist Jeanette Winterson returns with her 11th novel, "Frankissstein" (Grove Press).

Longlisted for the 2019 Booker Prize, "The Man Who Saw Everything" (Bloomsbury) by Deborah Levy takes us back to 1988, where narcissistic, young, bisexual historian Saul Adler's life is forever changed when he is hit by a car while waiting to recreate the iconic Beatles Abbey Road photo.

Debut novel "In West Mills" (Bloomsbury) by gay writer De'Shawn Charles Winslow is set in a North Carolina African-American community from the early 1940s to the late 80s, focusing on the friendship between Azalea "Knot" Centre and Otis Lee.

Don't be put off by the premise, high school student Conrad's relationship with his teacher Sammy, because "The History of Living Forever" (FSG) by Jake Wolff is much more than that, a quest to create the elixir of life so Conrad can save the lives of his self-destructive father and his husband, following a brain cancer diagnosis.

When it was first published in 2008, "Otherhood" (Bloomsbury) by William Sutcliffe was known as "Whatever Makes You Happy," the story of three British mothers who feel forgotten and neglected by their sons on Mother's Day. Newly retitled and reissued in a paperback edition to coincide with the Netflix movie of the same name starring Patricia Arquette, Angela Bassett, Felicity Huffman, and Jake Lacey as Huffman's gay son, it's now set in New York.

Readers who enjoy being scared out of their wits and who dug Jac Jemc's approach to the genre with her haunting novel "The Grip of It" are sure to find themselves shaken by her latest, "False Bingo: Stories" (MCDxFSG Originals).

"Falling: Stories" (Univ. of Wisconsin Press) is the second short story collection from Lammy and Ferro-Grumley Award-winning writer Trebor Healey. The 10 stories feature characters who have lost their way "figuratively and literally," and must confront the profound displacement of modern life.

Queer writer Elizabeth Gilbert explores female friendships and sexuality in "City of Girls" (Riverhead) over the course of 70 years, from Vassar to Manhattan, in narrator Vivian's distinctive voice. Gilbert wrote the book following the death of her girlfriend Rayya Elias.

Jami Attenberg, author of "The Middlesteins" and "Saint Mazie," tells the emotionally brutal and fearless tale of a family coming apart at the seams in "All This Could Be Yours" (Houghton Mifflin Harcourt).

Young adult readers: "There once was a boy who heard the Whispers," begins the new Y/A novel "The Whispers" (Putnam) by gay writer Greg Howard, in which 11-year-old Riley asks the mythical wood creatures known as the Whispers to help with the safe return of his missing mother.

"The Midwinter Witch" (Graphix/Scholastic) is the third and final book in "The Witch Boy" graphic novel series by Molly Ostertag. Powered by the "one, consistent message" that "magic has no gender," the book is set at the time of the Midwinter Festival, where Aster and Ariel confront a sinister force that "threatens everything the young witches have fought for."

Fifty years after a tornado devastated Mercer, a small Illinois town, three teenage friends, including gay Joshua, must work together following the touching down of another tornado in the exact same place in "We Speak in Storms" (Philomel) by Natalie Lund.

If We Were Electric: Stories by Patrick Earl Ryan
Sign up!