Still here: The Castle on the Hill 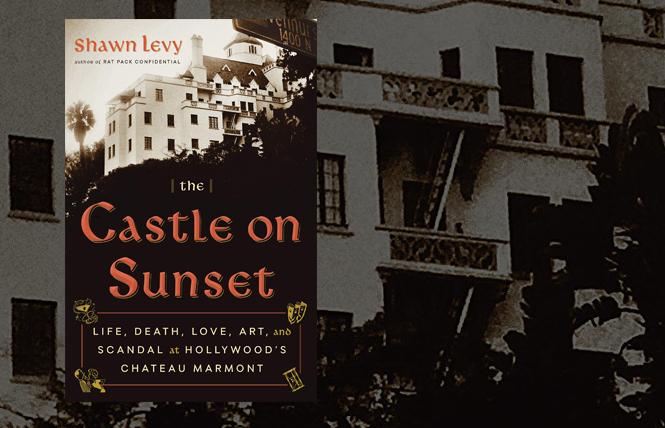 It's been overlooking Sunset Boulevard for 90 years, having opened just before the 1929 stock market crash. It survived the Great Depression, witnessed the Golden Age of Hollywood, and the rise, decline, and resurgence of The Strip. It housed legendary stars like Jean Harlow, who conducted an affair with Clark Gable while in residence. After her film career ended, the reclusive Greta Garbo would stay while visiting friends, knowing that her privacy would be guarded. In 1955, Tab Hunter and Anthony Perkins met at its pool and began their two-year affair. In 1982, 33-year-old John Belushi died from a drug overdose in one of its bungalows.

In "The Castle on Sunset — Life, Death, Love, Art, and Scandal at Hollywood's Chateau Marmont" (Doubleday, $28.95), Shawn Levy often breathlessly relates the fascinating history of a unique property. Originally built as a cheaply furnished apartment house, it became a hotel noted for discretion. It provided a haven for the famous who wanted the privacy lacking at Tinseltown's more deluxe hostelries. Various owners bought adjacent lots, landscaped the grounds, and added bungalows, which were popular with guests.

The Chateau Marmont was the creation of Los Angeles attorney Fred Horowitz, who conceived of it in 1926. The location was part of a large tract of land owned by San Francisco heiress Florence Dean, who agreed to invest in the venture. San Francisco and New York socialite Inez Fredericks was also an early partner. So was Mabel Walker Willebrandt, a law school classmate of Horowitz's whom President Warren Harding had appointed Assistant Attorney General, and who became the highest-ranking woman in the federal government.

Architect Albert Weitzmann was engaged to model the exterior on the Chateau D'Amboise, a Gothic pile dating to the 11th century in France's Loire Valley. Inside, no two apartments were alike. All had kitchens. Some were tiny studios, others large penthouses with sweeping views. Public spaces were originally cramped and undistinguished, but have since been transformed into more spacious and comfortable areas. It still has a relatively small garage.

The hotel wasn't always profitable, although it has thrived since its 1990 acquisition by Andre Balaz. Guests have been known to stay for months at a time. Director Nicholas Ray, reeling from a nasty divorce from Oscar-winning actress Gloria Grahame (he caught her in bed with his teenage son from an earlier marriage), had a long tenure. While there, 44-year-old Ray worked on "Rebel Without a Cause" (1955); convinced James Dean to star in it; seduced 17-year-old Natalie Wood, who was desperate to play Judy in the film; and, according to Gore Vidal, who was also ensconced there, had an affair with 16-year-old Sal Mineo before casting him as Plato in the picture.

In the 1950s, it was the preferred choice of New York "Method" actors coming west for movie work. Julie Harris, Ben Gazzara, Kim Stanley, Lee Grant, Paul Newman and Joanne Woodward, Rod Steiger and Claire Bloom, Geraldine Page and Rip Torn were among those who made it their home. Gay actor Montgomery Clift spent months there while recovering from a near-fatal 1957 car accident from which he was rescued by Elizabeth Taylor. His badly damaged face required considerable plastic surgery. Much of the time he was on painkillers. He became addicted to them, which led to his 1966 death at age 46.

The wildest event involving Method actors featured Shelley Winters. In 1955, she was divorcing her second husband, Italian actor Vittorio Gassman, and battling over custody of their daughter. She had recently appeared on Broadway with Anthony Franciosa in "A Hatful of Rain," and they fell in love. She moved into a house in Beverly Hills and brought her parents to live there to care for her daughter.

In 1956, Franciosa moved into the Chateau while filming George Cukor's "Wild Is the Wind" opposite the great Italian star Anna Magnani. Winters would prepare dinner nightly for Franciosa at her home, but he began arriving late or not at all, claiming he was filming at the studio. One evening, when Franciosa was again late, Winters learned he had left the studio hours earlier. Suspicious and angry, she grabbed a heavy metal statuette, jumped into her car, and drove to the Chateau. She rushed into his unlocked suite to find him and Magnani in a compromising position on the sofa.

Winters yelled, "Putana!" Magnani, while hurriedly putting on her blouse, outmaneuvered her and fled, racing down the stairs with the furious Winters right behind, brandishing the statuette and screaming, "Putana!" When Magnani got to the third floor, she was out of breath, so she turned to face Winters as she thundered down the stairs. After a few moments, Magnani began to laugh. Suddenly, so did Winters. They sat on the steps, hysterical. Magnani said, "Stupida. Don't laugh. He kill us both if we laugh. Be jealous and scream." So, to protect Franciosa's ego, Winters resumed shouting. After they got to the garage, Franciosa arrived, neatly attired. He insisted to Winters that he and Magnani had only been rehearsing a scene. Winters and Franciosa married in 1957, and divorced in 1960.

Decades later, Dominick Dunne was often in residence for months at a time while penning stories for Vanity Fair about notorious murders, including the O.J. Simpson case.

The Chateau's appeal remains undiminished. In 2018, Beyonce and Jay-Z hosted a party after the Oscar ceremony in the garage, which has low ceilings and is nearly windowless. It was the most exclusive event of the night.

Levy's research is thorough and carefully documented. His bibliography is impressive. The book is well-illustrated. "The Castle on Sunset" is both a history of a grand edifice and a narrative of Hollywood told from a unique perspective. As such, it's a welcome addition to the history of American movies.