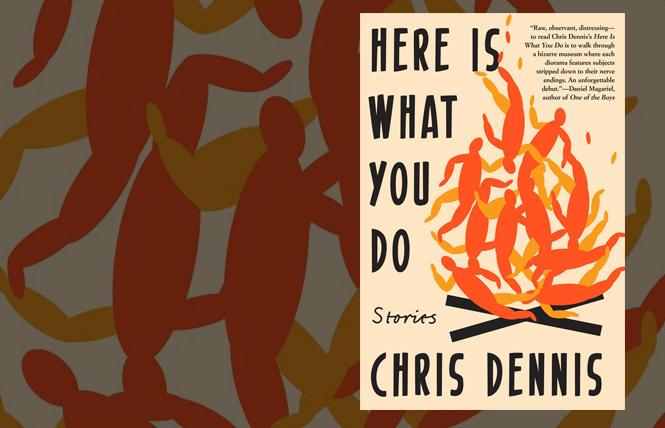 Here Is What You Do by Chris Dennis; Soho Press, $16

One of the great things about author Chris Dennis' outstanding debut story collection "Here Is What You Do" is its penchant for expressing the tone of uneasiness in his characters. He does this perfectly. After all, when a book's epigraph boasts a cryptic Dolly Parton quote ("It's all wrong, but it's all right"), there's got to be something interesting lurking inside.

That first bite of brilliance arrives courtesy of Ricky, the opioid-addicted southern Indiana high school history teacher in the opening title story who lands himself in jail for drug trafficking with his grandmother's car. Though serving only a year sentence, the days drag on. His innocence is clocked by the other inmates, who are willing to pay money "for the chance to get at you." His cellmate Donald, a butch, horny, demanding gay on the down-low, is no one to say no to, since he's on his fourth year of a 15-year sentence for manslaughter. Almost nightly, the two develop a brutal, violently sexual relationship that evolves into encompassing a kind of emotional and physical longing.

Scattered throughout the stories are the lost and the determined, trapped in dire circumstances. The teenage son of a gay Turkish immigrant in "This is a Galaxy" becomes suddenly parentless after a heinous robbery, and ends up working in a butcher shop. A rage-driven Kentucky lesbian academic in "The Book-Eating Ceremony" attempts to mitigate several impending deaths in her orbit while managing a messy life of obsessive feelings and penning a controversial biography. In the suspenseful story "In the Martian Summer," a widow learns about several bridge-collapsing earthquakes while out at sea off the coast of Mexico. The tsunami they've caused puts her and her shipmates into panic mode as they attempt to outrun the lethal waves.

One of the most memorable stories, "Nettles," follows a couple who abandon urban life to purchase a slaughterhouse in the country, where strangers ask a lot of questions that folks "in the city would never ask." The sellers are devoutly religious, and once they learn of their buyers' secularity, harassment boils over into lawless cruelty. Beneficial human kindness wins out in the end, though the couple's evil behavior at the command of religion is unforgiving.

In feeling for the pulse of humanity through his complicated characters' missteps and imperfections, Dennis presents a parade of the drug-addicted, emotionally rattled, and misguided, all struggling to enact some semblance of self-improvement. He emerges with a sterling, dark and stark collection of tales that burn themselves into readers' minds.