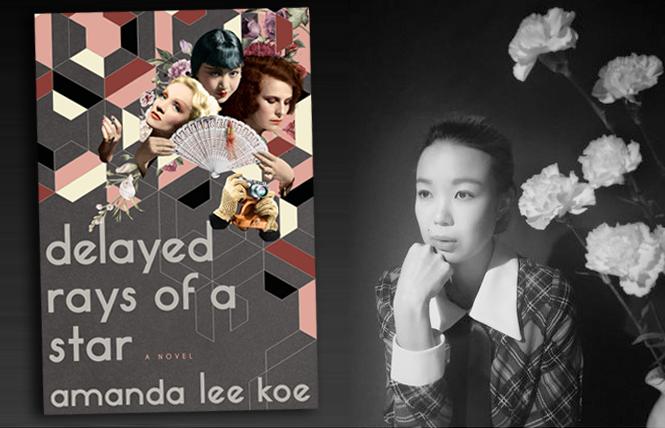 The brightest star of Amanda Lee Koe's debut novel "Delayed Rays of a Star" (Nan A. Talese/Doubleday) is Amanda Lee Koe. The queer, Singapore-born, New York-based Koe's book is one of those astronomical rarities people get up in the middle of the night to behold, natural spectacles yet as assured as the collaboration of high-energy physicists.

The novel is a time-hopping riff on three silver-screen luminaries — Marlene Dietrich, Anna May Wong and Leni Riefensthal — whose stars crossed in real life but here explode in a wildly imaginative take on what could have been. Koe, a born cinephile and seasoned, expert cinemaniac, takes the kernels of historical events, turns up the heat and makes them pop.

She says the germ of her novel was seeing an Alfred Eisenstaedt "snapshot" of the three women at the 1928 Berlin Press Ball. Recreating that scene, she peppers it with details from her own fecund imagination with the result that it somehow seems more realistic than made up.

It will be said that her book is cinematic, and it is to the toes of its dancing shoes; but the most cinematic thing about it is that the special effects play out on the flat surface of the page. Koe's complete mastery of the sentence not only holds this madcap juggernaut together but also gives it fuel, drives and steers it. Even if you sometimes can't believe what you're reading, it's not for any lack of clarity in the prose. At their wildest Koe's sentences are diagrammable; they do the work so the reader can read the stars.

Then there's the pacing. What initially seem like exhibitionist stunts — on the part of the luminaries, but equally on Koe's — are braided with studio-quality hair-and-makeup professionalism as we see the women cross paths and indulge their lesbian desires. Only after the skeins are thoroughly knotted does Koe lead us back to the individual women in chapters that read like career lookbacks, some in first person, some in third. Koe is the unreliable narrator you've been waiting your life for.

Concealing her immaculate craftsmanship, Koe steps into sex scenes with the aplomb of a prima ballerina, hot takes produced less by noise than by the unlikely fusion of over-the-top action with deep feeling, however fleeting. This marks the first time I've read a lesbian sexcapade set in the bathroom stall of an elegant restaurant, and it has the impact of the tearoom rumble at the beginning of Garth Greenwell's "What Belongs to You" combined with the droll commentary of pre-stardom bathroom custodian Wong and the revelation of the inner lives of two women stepping back into public with metaphorical toilet paper stuck to their shoes.

There's also man-man sex, with all its complexities, between two soldiers from the Nazi North African front drafted by Goebbels as extras in Riefensthal's sentimental, pre-propaganda Alpine weeper "Tiefland." Then there's the ventriloquism. Wong makes herself a pen pal to the eminent cultural commentator (and homosexual) Walter Benjamin as he dithers about escaping the Gestapo by scaling the Pyrenees. In its own chapter, Koe gives us Die literarische Welt essay about her, in fluent faux-Benjaminese.

Wong ("too Chinese to play a Chinese" in Hollywood, despite co-starring with Dietrich in "Shanghai Express") is probably the least-known of the trio today, but Koe eschews cliches about the Asian-American experience to depict fleet-footed desperation at its most individual. In "An Urgent Task for Top Scientists at the Kaiser Wilhelm Institute in Berlin," Koe buries the Nazi propagandist Riefensthal beneath her lesser-known brilliance as an actor, dancer and director. A voluble if mad Leni is heart-breaking in an imaginary media interview the day after her 101st birthday.

With Dietrich, Koe presents every intimate facet of a woman the rest of the world regarded as a magnetic persona. She meets the adolescent JFK in a swimming pool, then reconnects with the Presidential Kennedy in 1961, "on a day trip to receive an honorary peace prize." Here's Koe at her most richly comic:

"Jack, she protested. I never did it with your daddy.

"I knew the old devil was lying, he said, patting her rump twice. That's the only door I got in first.

"She had not made him wear a condom. Not because he was the president — it was an indiscriminate favor she extended to any man she bedded."

We also see Marlene in final decline in her blacked-out Paris apartment (hiding out on the Champs Elysees), her maid BeBe arousing, then attending to some all-but-forgotten sexual needs while also emptying the elegant porcelain bedpans.

I can't wait to read "Delayed Rays" again, to catch whatever I might have missed on the rocket-propelled first line-reading.