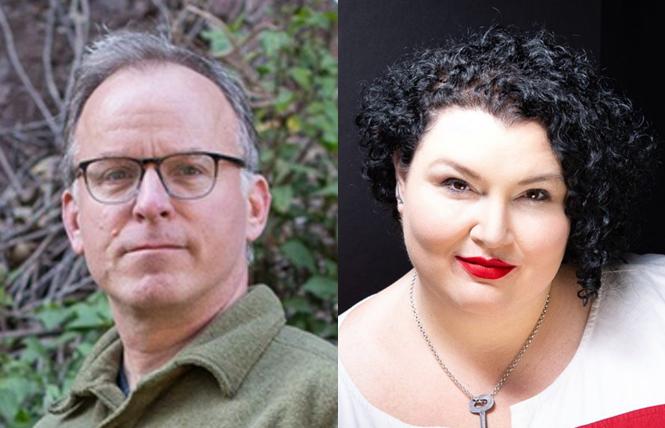 One of the perks of our job has been having access to some of our lifelong heroes in gay life & letters. Over the years we've been able to meet and interview some heavy-hitting authors: Edmund White, Alan Hollinghurst, Colm Toibin and Dennis Cooper only start the list. But another side of arts journalism is in knowing up-and-coming voices in gay literature. Right now Out There is working alongside two colleagues who also moonlight as well-read gay authors.

Multitalented Jim Provenzano is the Lambda Literary Award-winning author of six novels and a play based on one of them, "PINS," that has been given local and regional productions. His latest novel, "Now I'm Here," a story of first love, is available in paperback, Kindle and Kobo ebook editions (Beautiful Dreamer Press).

Charismatic Meg Elison has published the much-awaited conclusion to her Philip K. Dick Award-winning "Road to Nowhere" trilogy with "The Book of Flora," available in trade paperback and eBook (47North). Science fiction and fantasy devotees ate up the first two books in the trilogy, "The Book of the Unnamed Midwife" and "The Book of Etta."

We posed a few questions via email to our busy B.A.R. colleagues. Their full responses follow in this web version of the Out There column. 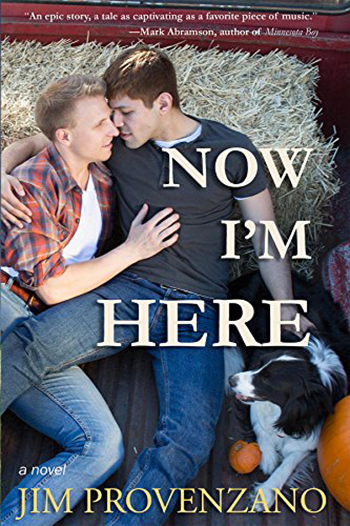 Roberto Friedman: First, congratulations on having your books out there in print and garnering devoted readerships. Working full-time, how do you find the time to write novels? After staring into a computer screen all day, Out There can't face another one in our downtime.

Jim Provenzano: Having daily and weekly deadlines at work aids the framework for my fiction-writing deadlines at home. It only takes a few hours to write a few hundred words a day for a novel. That's a goal, but not a necessity. I'm a night writer, so after work, I'll sometimes take a nap, then stay up late until I've exhausted the current ideas in my head.

Meg Elison: I write first thing in the morning, with a daily quota of 2k words. That way, I'm not trying to fight my own exhaustion (or inebriation) in the evenings, and I get a little done every day. I'm a morning person, so I do my best work then anyhow. Might as well use it. I write quite a bit on the weekends as well. If screen-stare is a problem, I sometimes use my little WiFi-enabled typewriter, the Freewrite. It cuts distractions, too.

How do you feel about being classified (by, say, Lambda Literary Award categories) by genre — in your case, Jim, so-called "gay men's romance" novels, and in your case, Meg, "sci-fi" and/or "fantasy" novels? Is genre fiction different from so-called literary fiction?

JP: Moving into the gay romance category was appropriate for my fourth and fifth novels, "Every Time I Think of You" and its sequel "Message of Love." They're about gay love and coming of age, but also the serious issue of disability. I broke a lot of the structural tropes of romance, on purpose. It was sort of a covert plan to insert literary style into another genre.

My other novels aren't romances, and that's disappointed a few readers. But I'm not interested in repeating myself, style-wise. I will always write gay male fiction, and am proud to do so, just not in the same way.

In returning to literary fiction, where bad things happen and there isn't necessarily a happy ending, I lost some readers. It was a deliberate move, but I don't regret it. The first drafts of "Now I'm Here" preceded several other books. It's a more serious story that needed to mature before completion.

ME: Genre fiction really isn't that different, despite all marketing efforts to the contrary. So much of what we think of as "literary" contains genre elements, but gets a pass based on the beauty of the prose or its position in the culture. I love being classified as science fiction because we have an incredible community, a robust awards season, and we're doing the most exciting work to diversify the market and the canon. Anyone who turns their nose up at genre fiction can take it up with Atwood, Morrison, Shelley and Shakespeare. 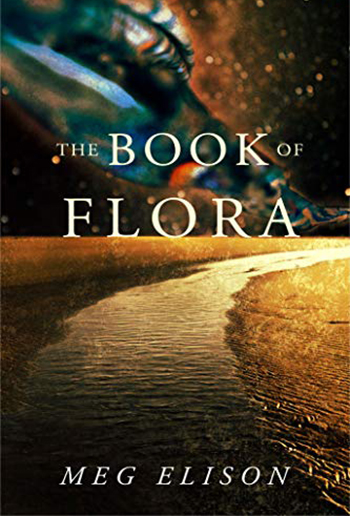 Do you read other authors' books in your genres while you're writing yours? Or do you try to keep free from influence?

JP: For "Now I'm Here," I read related books, biographies of Freddie Mercury (the character Joshua plays a lot of Queen) and gay farmer nonfiction, since his boyfriend David is a farmer (the anthology "Farm Boys," Mark Abramson's "Farm Boy"). Also, Ohio history books, and many novels written in the 1980s by authors who died of AIDS, like Robert Ferro. How AIDS had been depicted was important to recall. I found very few rural stories, so I was inspired by what exists, but also what's been ignored.

ME: I read constantly and widely, I have to. I want to know the market, I want to know where I stand with regard to originality and voice. I also love the literary world and want to be a full participant in it. When I meet other authors, I want to tell them what I liked or secretly feel very superior, ha! My primary motivation to write is reading something that isn't good enough, that lacks for something I can bring to the conversation. Most of the time, that feels like rage. But it starts with reading.

Does toiling in journalism all day influence your fiction writing? Or vice versa?

JP: Research and facts serve as a springboard for both. My novels "Every Time" and "Message" are set in Philadelphia in the 1980s. I read dozens of books for research, everything from Philadelphia accessible tourism to wheelchair basketball coaching guides. As a journalist, interviewing disabled colleagues was priceless. Reading many newspapers of the era (mid-1980s) was crucial, and visiting the city and two university archives was fun and informative. I love doing research. A few single vintage microfilm newspaper articles inspired entire chapters. So, yes, journalism feeds my fiction.

For "Now I'm Here," research again proved inspirational; crop details, locust migration, winter blizzard timelines, even Queen concert playlists added to the story. Going back to my first novel, "PINS," I visited the town of Little Falls, bought maps (there being no Google maps in the early 90s), then made my fictional changes. My years of actually wrestling could not have been learned from anything but actual experience. But writing a sports column for the B.A.R. (1996-2006) helped me get a wider perspective on LGBT athletes.

ME: Journalism is a great place to develop certain skills that benefit a novelist. It encourages brevity, economy of vocabulary, precision, research, and adherence to deadlines. It means I'm writing literally all the time, but it's like working out. Writing novels is like high-level athleticism. I have to stay in shape to show off, so I let the day job be my gym. Loads of great novelists were journalists by day, including some of my heroes. It's a fine set of footsteps to follow.

To borrow a page from The New York Times Book Review, which three authors, living or dead, would you invite to an ideal dinner party? What would you serve?

JP: I suppose I should invite some historical figures, but I'd rather have a return engagement with people I knew. I'd treat them to endless Spanish tapas and wine at Canela on Market Street. Stan Leventhal, David B. Feinberg, and Bo Huston each inspired me personally in my early writing. I'd like to see them again to thank them.

ME: Octavia Butler, whom I admire extravagantly and died far too young. Stephen King, because his books raised me. Oscar Wilde, my patron saint who I imagine to be a perfect dinner companion and never a bore. It's a summer supper under big spreading trees at my place in Oakland. I'm serving champagne on ice, oysters on the half shell with mignonette, bread and cheese, and clam chowder with fingerlings. We're going to wind down around a fire pit with a lot of Japanese whiskey and dark chocolate chili pepper cake. I hope we talk until dawn.