Our week beats your year 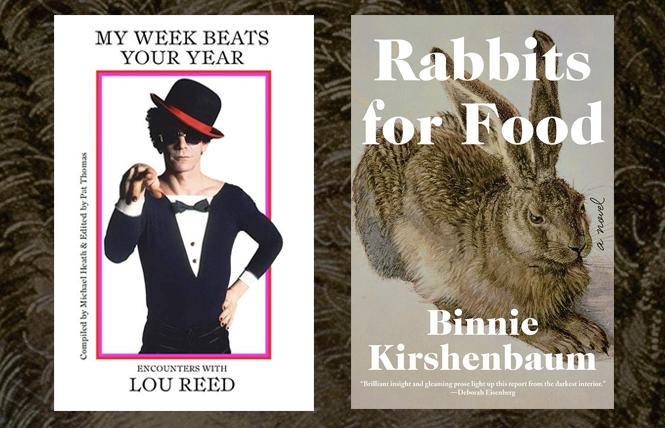 The headline is not meant to be insulting. It's an homage to a new book titled, "My Week Beats Your Year — Encounters with Lou Reed, 1972-2013" (Hat & Beard Press), compiled by Michael Heath and edited by Pat Thomas. The book's a collection of interviews that the rock star, best known for leading the Velvet Underground but better represented by years of his own work, gave to music journals, magazines like Circus, Interview and Rolling Stone.

That this is even a book boggles the mind, as Reed was a notoriously difficult interview subject. But as Heath notes in an introduction, "For all his publicly expressed loathing of the press in general and music journalists in particular, during his long career as a rock artist, Lou Reed never failed to be less than entertaining in his dealings with the fourth estate." In fact, Health writes, "In a style at times very much informed by his mentor Andy Warhol, Reed could play the media like a Marshall-amped Stradivarius."

The interviews are published both in their original layout and typography and, thank the gods of legibility, in a re-typeset format. Mostly Q&A, they're generally written not by brilliant prose stylists (with the possible exceptions of Lester Bangs and Glenn O'Brien) or famous names (except Lance Loud), but by workaday music scribes. Reed's answers depend largely on his mood. He does not suffer fools. Still, there are gems scattered throughout. When one hapless journo pleads, "I got to come up with an angle, Lou, give me an angle!" Reed replies, "You want an angle? Isosceles."

In fact, wit is at the very core of his work. "I like the way language works and playing with words. I was an English major in college," he said. "I love the way guys like Raymond Chandler and Delmore Schwartz wrote dialogue. I always thought my best stuff sounded like someone speaking directly to you in conversation."

Not all interviewers lived up to his standards, to put it mildly. "I don't mind questions about my work, but interviews are always so personality-oriented," Reed said. "I've been asked questions that I'd describe as grotesque and horrible, questions that a friend wouldn't even ask a friend. For years I just took Andy Warhol's advice and lied."

Though music is the primary subject, there is an interview from Kung Fu magazine, "A Walk on the Wild Side of Tai Chi," about Reed's lifelong study of that martial arts practice. The book's title is taken from the artist's own liner notes to his notoriously difficult 1975 album "Metal Machine Music." And by sampling the Q&As, a reader gets a good sense of the man and his decades-long oeuvre.

Listen, we know depression and mental illness are no laughing matters. And a novel about a clinically depressed, self-destructive basket case does not sound appealing in the slightest. But because we enjoyed reading "Rabbits for Food" (Soho Press) very much, we know that author Binnie Kirshenbaum is the real thing, a comic writer with chops, a stylist with something to say.

The book's protagonist Bunny has disappeared way down the black hole of depression. When she progresses beyond sapped motivation and paralysis to actively hurting herself, she is institutionalized. Much of the book relates her experiences in a locked psych ward, so in that sense the book is like Ken Kesey's "One Flew Over the Cuckoo's Nest," only without being the least bit sentimental or hopeful. In fact, the author's dry, clipped tone is her saving grace: there's not the faintest trace of artiness, but the sad tale here related still manages to be greatly comic. We're still not sure quite how Kirshenbaum did it, but we're glad she did.