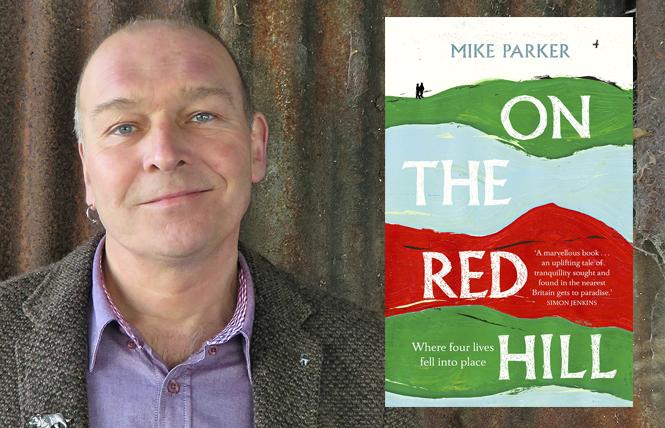 The rigors and satisfactions of living in remote places for a certain type of LGBTQ people are rarely articulated more artfully and artistically than they are in Mike Parker's "On the Red Hill" (Penguin/William Heinemann). I can't remember a time before "We are everywhere" was a predictable chant at an LGBTQ gathering, but sometimes it takes reminding that, as important as cities have been to the advance of LGBTQ politics and culture, there are actually queer folk who find their proper place in quieter venues — in the case of Parker's book, rural Wales.

But even if remote redoubts don't beckon you, "The House on Red Hill" may be a salve for the welts of the news of the day, where the closest thing to an upper is a gotcha. It's like settling into a warm bath, or a cool bath, depending on the temperature alternative you're after. It's not a beach book, but a perfect one for a staycation. Reading it, you're somewhere wholly out of the ordinary.

That specifically LGBTQ kind of urban/rural tension surfaces in the early pages of "Red Hill," which is actually the name of a house. George Walton, 79, and Reg Mikish, 89, are at the local constabulary getting their marriage legally formalized — the first-ever such proceeding in Machynlleth, Wales — after nearly 60 years together. "Gentle, sweet, troubled Reg" is as subdued and wary as celebratory. For him, the UK's laws against homosexuality, finally eliminated in 1972 but brutally brought into enforcement when he was a young gay man reveling in anything-goes post-WWII London, haunted him. He "combined porcelain sensitivity and steely strength," Parker writes, and was not avid to tamper with a lifelong treasure for the sake of becoming a husband, which seemed to him, like others of us, a betrayal of the good parts of otherness. It was a very small ceremony, vanishingly short compared to the length of the men's till-death-do-us-part union.

Briefly, the story of "On the Red Hill" is the transition of the ownership of the house, Rhiw Goch, from those gay elders to a not-that-much-younger gay couple who eventually, to their astonishment, inherit the house debt-free, having lovingly seen to their older friends' last years, providing them intimate care to the end. George and Reg died within a few weeks of each other in 2011.

The second half of the ingeniously structured book puts the emphasis back on the younger couple, the author, Michael, and his long-term partner Peredur Tomos, "Preds" for short. The book is less than pastel, cognizant of the hardships of life in the bonnie boonies. But at a time when LGBTQ memoirs rightly focus on an array of identity issues, crowned by nationality, here is a gentler story of gay-family succession, having little if anything to do with consequences of birth.

It's the unity of the stories that provides the warmth, but the book is cleverly divided into four parts — each an element, a season, a compass direction and one of the four principals. What's striking throughout is the absence of any sense of queer men looking for a place essentially to hide. It's about their being called, each in his own way and time, home.

The nature writing is rich and unfettered. You wonder how it can be so extravagant and detailed. Here's some prose about Spring: "The greenness of the Rhiw Goch was on a whole new scale. It drenched me. Green everywhere I looked and in an infinite variety of shades, from the feathery line of the beech in first leaf to the dark, army camouflage of ivy in sunless corners. Green so luminous it tinged the sky."

I'm leaving out several succeeding pages just about greens. Several accounts of climbing Fron Goch, an area described by spirit stones (think bonsai Stonehenge), celebrate the spiritual connection between humans and land, and leave you tingling with a sense of elevation.

The sense of larger, surrounding community is richly evoked: "No one does a funeral better than north Walians: even the drabbest village tabernacl, frowning pebbledash against a slate sky, explodes into celestial colour when hundreds — and it almost always is hundreds — gather to raise the roof in radiant mourning."

Like W.G. Sebald's books, "Red Hill" is copiously illustrated by black-and-white photographs, by George or the author, captioned in the back. But it's Parker's gift for words that brings each of these men alive, from their painful movements beyond internalized homophobia, across their struggles with claustrophobic coupledom in the middle of nowhere, "the gathering misanthropy of midlife" — and the shades of love more abundant and nuanced than those of green.

The prose, while invitingly readable, regularly shoots for the heights, leaves the reader in a land with a beauty all its own — or at the imaginary New Year's Eve party with spirit guests numbering Walt Whitman and Edward Carpenter, Ivor Novello, James Baldwin, David Hockney and Lord Montagu, A.E. Housman and W.H. Auden, with J.R. Ackerley assisting Forster with a remake of the skinny-dipping scene from "A Room With a View."

Out of the clear blue, Parker asks, "When do you know that the future has arrived?"