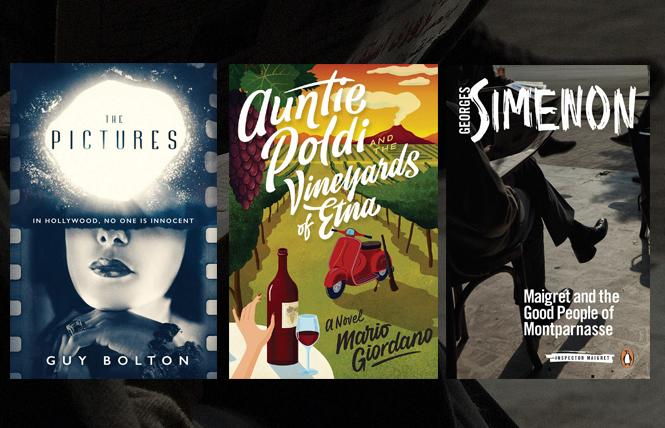 Good murder mysteries simultaneously challenge the reader and afford a splendid way to relax, whether spending the summer at home or away.

Making the 1939 film version of "The Wizard of Oz" was challenging in almost every way. What if a murder had made shooting even more difficult? That's the premise behind Guy Bolton's clever "The Pictures" (Point Blank, $14.99). When one of the movie's producers is found dead, Jonathan Craine, a studio "fixer," must contain the damage, concealing as much of the truth as possible. He must also guard the reputation of the dead man's widow, beautiful starlet Gale Goodwin. A Chicago crime syndicate, a thriving prostitution racket, and some incriminating stolen pictures complicate things further. Protecting the glamorous Goodwin won't be easy, but it makes for an entertaining, atmospheric story.

Sicily is among the most magical places in Italy, which has them in abundance. The Mediterranean's largest island has, at one time or another, been home to Greeks, Carthaginians, Romans, Normans, the French, and the Spanish, all of whom left traces of their presence and created a gene pool that produced highly attractive people. The mild weather, charming cities and towns, splendid ruins, gorgeous coastline, impressive mountains, and superb cuisine are irresistible. Mario Giordano takes full advantage of these attributes in "Auntie Poldi and the Vineyards of Etna" (Houghton Mifflin Harcourt, $26). The German Auntie Poldi retired to the island and promptly found herself investigating murder. She likes Prosecco and handsome men, including Chief Inspector Montana. When the water supply in her neighborhood dries up and a close friend's dog is found dead, Poldi gets involved. Someone has to. Soon, she and the Mafia are battling among the vineyards. Sicily is wonderfully evoked, and Poldi is as entertaining as she is enterprising. Translated by John Brownjohn.

Readers preferring a foreign urban setting will grab Georges Simenon's "Maigret and the Good People of Montparnasse" (Penguin, $9.98). Inspector Maigret is a realist. He knows that things seldom are what they initially seem. So when an apparently good man is fatally shot in the family home in Paris, Maigret won't let the victim's respectable reputation or his well-to-do circumstances deter him from learning the truth. Nonetheless, Maigret surprises himself by being shocked at the crime. Simenon is a master of psychological insight, and Penguin's new editions of his admirable novels allow another generation to be dazzled by his low-key brilliance. Translated by Ros Schwartz. Originally published in 1958.

Brittany is the setting for Jean-Luc Bannalec's "The Fleur de Sel Murders" (St. Martin's Press, $17.99). Commisaire Georges Dupin, eager to escape the dreary paperwork of his profession, goes to the "White Country" on the Guerande peninsula, so-called because of its salt works. He has always doubted the old farmers' claims that the freshly harvested salt's violet scent makes people crazy, but when he is unexpectedly attacked, when his journalist friend Louis Breval disappears, he begins to wonder if the claims aren't true. He manages to get assigned to the investigation, which leads to clashes with Sylvaine Rose, the inspector responsible for the area. She doesn't welcome his presence. Smoothly plotted and filled with the Atlantic Coast's unpredictable ambiance. Translated by Sorcha McDonagh.

No writer could have invented the Mitford sisters. The striking daughters of Baron Redesdale were as different as they were celebrated: Nancy wrote elegant novels and popular biographies. Pamela divorced her bisexual husband and lived an openly lesbian life with Giuditta Tommasi, a celebrated Italian "horsewoman." Diana married Sir Oswald Mosley, head of the British Fascist Union, and spent much of WWII in jail. Unity worshiped Adolph Hitler, became his confidant, and, in Munich after WWII, attempted suicide by shooting herself in the head. She survived, was permanently disabled, and allowed to live in England until her death. Jessica ("Decca") moved to the East Bay and joined the American Communist Party, but resigned in opposition to Stalin, and became a muckraking journalist who exposed the truth about the "American Way of Death." Deborah ("Debo") became Duchess of Devonshire, presided over Chatsworth, one England's stateliest country houses, and astutely replenished the family coffers by opening it up to tourists. Jessica Fellowes has conjured them up in "The Mitford Murders" (St. Martin's Press, $16.99). Louisa Cannon, 18, longs to flee her dreary, poverty-stricken life in 1920 London. She becomes a domestic at the Mitford country home in Oxfordshire. She's befriended by Nancy, only 16, who longs for adventure. When Florence Nightingale's namesake goddaughter is murdered, she gets her wish. Witty, stylish, and well-plotted.

Summer wouldn't be the same without a new Commissario Guido Brunetti mystery from Donna Leon. "Unto Us a Son Is Given" (Atlantic Monthly Press, $26) finds Guido's aristocratic father-in-law, Count Orazio Falier, concerned when his closest friend, the elderly Gonzalo Rodriguez de Tejada, wants to adopt a much younger man as his son, making him the heir to his considerable fortune. That prospect has also disturbed Gonzalo's noble friends, none of whom give him the pleasure the young man does. Guido wonders why the elderly gentleman cannot do as he pleases. Things become complicated when Gonzalo suddenly drops dead on the street. One of Gonzalo's friends arrives in Venice for the memorial service, but is found dead in his hotel room. Now the sympathetic Brunetti is forced to investigate long-hidden secrets of an old family friend, a painful undertaking. The humane Brunetti, with the aid of his socialist, Henry James-loving, university professor wife, Paola, easily glides through the gilded world of Venetian aristocracy, which, like La Serenissima itself, is far more dangerous than the casual tourist imagines. Leon's evocative prose, her mastery of character, insight, plotting, and her unequaled knowledge of Venice grip the reader. This is her 28th Brunetti novel, but it is as fresh and engrossing as the first one.