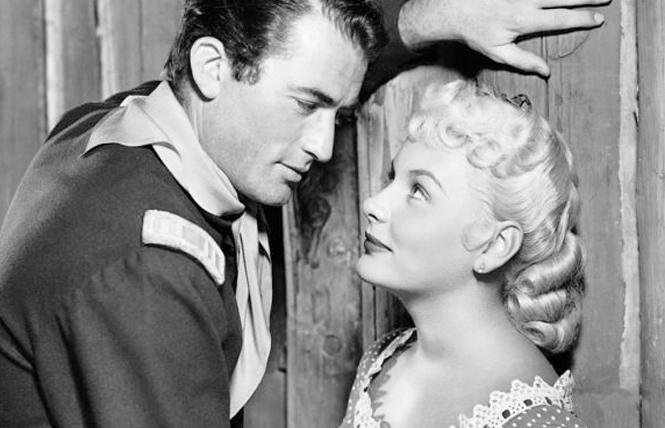 Film stars Gregory Peck and Barbara Payton in the film "Only the Valiant" (1951).

There are fewer tales in Hollywood lore sadder than that of Barbara Payton (1927-67). Actress and model Payton made 14 films between 1949-55. She showed great promise at the dawn of her career, getting terrific notices for her work in the gritty film noir "Kiss Tomorrow Goodbye" (1950) opposite legendary movie tough-guy James Cagney. She was placed under contract to Warner Brothers, appearing onscreen with big names Gary Cooper and Gregory Peck. But her tumultuous personal life, which included affairs with a number of married men in Hollywood, garnered her bad tabloid press. The suits at Warners decided she was more trouble than she was worth and cancelled her contract. In 1951, the year after her greatest screen triumph, she was reduced to starring in B movies like "Bride of the Gorilla." In 1955 her film career ended, and by the 1960s, Payton was living on skid row, working as an alcohol-ravaged prostitute. When she died in 1967, she looked far older than her 39 years.

A lot has been written about Payton since her passing over 50 years ago, much of it negative. But author John O'Dowd saw the humanity in Payton. In 2007 he published "Kiss Tomorrow Goodbye: The Barbara Payton Story," a full-length biography that told the complete story of this most complicated woman. O'Dowd didn't gloss over the negative aspects of her life, but he also included her generous, kind heart, and the deep love she had for her son, her only child.

The book was well-received, and now, a dozen years later, O'Dowd follows up with "Barbara Payton: A Life in Pictures," a handsomely mounted coffee-table book that tells Payton's story through hundreds of photographs. The book is divided into 34 chapters, beginning with Payton's childhood in small-town Minnesota. Photos provided by her family reveal a beautiful and happy child, without a hint of the horrors to come. The second chapter is devoted to John Lee Payton, Barbara's son. These photos illustrate what a loving mother she was. Author O'Dowd has done his homework, as he was in direct contact with the younger Payton and other members of Barbara's family. The photos come from the personal collections of those who knew Barbara best.

Most impressive are Chapter 3, "Modeling and Socializing in Hollywood," and Chapter 8, "In the Warner Brothers Stills Gallery." The photos in these chapters, professionally posed for, display a woman of stunning good looks who had that elusive "star quality." Payton was a knockout and knew that the camera was her friend. She knew how to show herself off to her best advantage. There's no question that Payton had the potential to become a major star, and might have been one of Hollywood's leading ladies, had her personal life not got in the way of her work. Each of Payton's 14 films gets its own chapter, including posed stills, behind-the-scenes shots, and in some cases, scenes from the film. These shots reveal a stunningly beautiful woman who took her work seriously and delivered 100%.

The book doesn't gloss over negative aspects of Payton's life, and includes many photos from her ill-fated romances with Hollywood leading man Franchot Tone and movie tough-guy Tom Neal. These relationships brought Payton tabloid press of the worst kind and led to her film career's end. Also included are press photos from Payton's final years in Hollywood, when she made a sad, aborted attempt at a comeback, and slid into alcoholism and prostitution. At this point Payton was completely deluded, believing herself to be the star she no longer was. She saw the tabloid headlines she got as proof she was still a celebrity, and couldn't see she'd destroyed her life.

O'Dowd avoids judging Payton and simply presents what is, the good and the bad. He does a remarkable job of painting a sympathetic portrait. His research is meticulous. He includes screen shots of the coroner reports filed on the day she died, as well as her death certificate and autopsy report. Also included are more than a dozen pages of the sensational tabloid headlines Payton received.

This book gives a fully balanced view of a life that should have had a happier ending. It also serves as a reminder of what a cruel and unforgiving town Hollywood can be. Barbara Payton deserved better than what she got. Thanks to John O'Dowd, she has gotten her due.