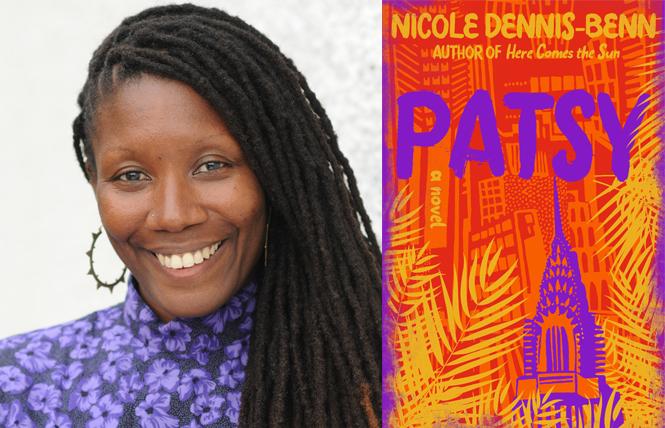 Only the excellence of Nicole Dennis-Benn's writing got me all the way through her second novel, "Patsy" (Liveright). Her first, "Here Comes the Sun" (2016), hit like one of those acts of nature — hurricane, tornado, tsunami — from which no one can look away, events of awe and power. I can count on one hand the number of books I cannot put down, and "Here Comes the Sun" was somewhere around the ring finger.

"Patsy," a sequel in only the broadest sense in that it depicts the hardship of Jamaican women of color and othersexuality who make it out of Jamaica, is tough going. An illustrative precedent might be the primal sweep of Maxine Hong Kingston's "The Woman Warrior" so strongly contrasted with its successor, the denser, grittier, literarily more advanced but daunting "China Men," about the hardships of Chinese male immigrants in the US.

"Patsy" is yet another entrant in the tidal wave of LGBTQ literary fiction about the immigrant experience, a topic that is forcing the world to look it directly in the face in our moment. Its eponymous protagonist lands a legitimate visa to come to the U.S., escape the grind of Jamaican oppression, and, as double-dealingly as not in these circumstances, get a crack at prosperity, which of course she will share with the less fortunate back home, here Patsy's mother and Tru, the five-year-old daughter she is guiltily leaving behind.

The larger theme is the interminable struggle for freedom in the fullest sense that is universal, but bought at a higher price, with greater hazards, for immigrants. Patsy's conflicted break for her illusion of liberty, and its discontents, makes "Patsy" a far harder read than "Here Comes the Sun," ironically a book with even grittier realities but more palpable sun.

Patsy also has a second, secret motive, hardly abnormal or reprehensible on its own, for leaving the island. She hopes to resume a love affair with Cicely, a fellow black (but, and this is Dennis-Benn's rebuke of racial typing, "high yellow") lesbian, that first bloomed in Jamaica and was interrupted by Cicely's emigration to Brooklyn, as it happened more than a Caribbean away.

When Patsy gets to Brooklyn, the high-rises of New York prove no more uplifting than the beaches of Jamaica when she discovers, promptly, that Cicely has found herself a man and a ticket to affluence, fame and misery. Both Cicely and economic prosperity slip Patsy's desperate grasp.

Dennis-Benn is unflinching in her depictions of the difficulties of life in America for those, especially women, who don't have "papers." Patsy's dreams of a place to pursue higher education quickly collapse into off-the-books jobs first as a restaurant bathroom attendant, then, more wholesomely but understandably for her more emotionally painfully, a nanny.

The novel is hugely ambitious, and Dennis-Benn proves her mastery at controlling a very large body of prose. "Patsy" is a story that would wilt in a linear telling, and the author deftly shifts perspectives across time and over a large cast of characters. In almost the exact middle of the book, Tru begins to dominate the narrative, wincingly denied, for a decade, any direct guidance her own lesbian mother might have provided. The plot is like a "slow" tropical storm that gathers shape and strength as it crawls over treacherous waters, reaches a climax of devastating impact before an only partially convincing happy ending.

The task Dennis-Benn has set herself is the slippery, slowly turning sculpting of a protagonist who is superficially likable, nearly sympathetic, but, in test after test, harder to admire or even feel for, so numerous and complex are her character flaws. She's an ever-fattening human molecule whose component atoms are envy, resentment, unalloyed shame, uninhibited self-centeredness paired with equally unmanageable self-hatred and, we're told again and again, disappointment, this last the ground bass supporting the harmonic structure of this novel. Perhaps it's only Dennis-Benn's unwavering empathy that gets her readers through the thickets of her protagonist's flaws.

Without sparing them their dignity and self-determination, in passages of terrifying compression Dennis-Benn gives us mother's and daughter's reasons for their pain, directly related to damage to their genitalia. These are self-consciously haunted women whose torment is modified only by their highly individual ways of setting each other free, to be who they are, through hard-fought and only partially won self- and mutual forgiveness.

To the extent that it's true that there are authors that show and others that explain, Dennis-Benn has, this time, taken the latter route, almost compulsively telling us what her more than amply vivid characters are enduring psychologically. The occasional result is an off-putting monotony redolent of the immigrants' own punishing circumstances. Still, she leaves us with characters we can't get out of our minds, most particularly the ones that stab at our hearts.