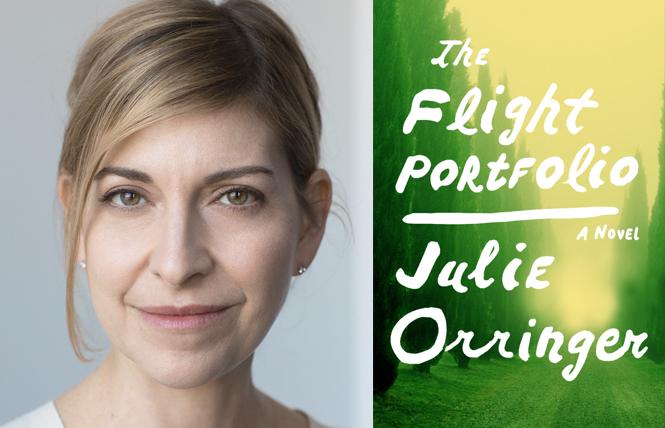 Every now and then a living writer comes forth with what gets labeled "a 19th-century novel." When that's not an outright slur, what is meant is that it tells its story beginning to end, has chapter titles and sections within chapters, uses paragraphs with indentations, and puts punctuation marks around direct quotations. I'm speculating here, but I suspect that if there is a reason Julie Orringer has chosen this style for her new novel "The Flight Portfolio" (Knopf), it's to eliminate barriers to a story of lasting urgency — genuinely momentous, not just of the moment.

Her historical novel re-enacts the doings of the US-fostered Emergency Rescue Commission, sanctioned by Eleanor Roosevelt, one of many organizations dedicated to getting the persecuted out of the clutches of the Nazis and to safe ground, particularly in the U.S. (whose record of accepting refugees, particularly Jews, is tarnished at best). What distinguished the Commission was its mission to get the finest minds and most fertile imaginations of the Continent out of Europe and the concentration camps.

The moral quandary — are geniuses more worth saving than "your tired, your poor and your huddled masses yearning to breathe free?" — is patent, and Orringer addresses it directly. Doing so repeatedly, she takes hold of her role as a historical novelist not to plead one case against another.

Plot-driven and suspenseful as her chosen story is, she makes it her task to probe the conflicted emotions of the characters swept up in an enterprise by its nature beyond good and evil, most of them wrenchingly sympathetic but even the most morally compromised, boorish and unsympathetically malicious of them as credible as they are cynical. In war, compromises abound. Orringer's genius is in bringing characters off the page, and she snares her readers into the conundrum of who is to make life-and-death decisions about people who are knowable, then known.

Her central character is Varian Fry, a historical personage who, like Orringer's so-named character, leaves Harvard for Europe, encounters first-hand the Nazis' barbaric pogrom against the Jews, and goes to Marseilles to head the Commission, qualified principally by his wiles and tireless courage. Constitutionally high-strung, Fry routinely endangers his own physical constitution while making himself daily vulnerable, including as a gay man, to the Gestapo-leaning Vichy government.

Married to an open-minded American woman, Eileen, whom he keeps safe in their New York home, Fry is nevertheless tormented by his homosexuality, a personal specter that rears its head in all the usual ways but self-ignites at an unforeseen reunion with a Harvard classmate, the wholly fictional Elliott Grant, with whom he'd had a torrid undergraduate affair. After a 12-year separation premised on the myriad misunderstandings their secretive liaison has engendered, Grant turns up in Marseilles on a salvation mission of his own — and with a secret of his own: that his fair skin has kept Harvard, now his employer, from knowing he was a "Negro," which would have been position- if not career-ending. Their passion is rekindled to the point of recklessness.

Ingenious as they are, especially at subterfuge, neither has the kind of genius it is Fry's remit to save. Orringer gives us Marc Chagall, Thomas Mann, Franz Werfel and their wives, Werfel's none other than the formidable former Alma Mahler — among many others of comparable distinction — as wholly credible, living, breathing, fearful, hesitant, temperamental, erratic and in some cases old people, faced with the prospect of hikes over the Pyrenees and passage on shipboards no one would mistake for luxury cruises. Oddly, among the rescued, Hannah Arendt is a walk-on, though her personal and moral authority set her few paragraphs alight.

The titular "Flight Portfolio" is a physically crude binder of art and literary work made by the celebrities in retreat, both as a unique record of their experience and as a potential source of income to sustain the enterprise, once it makes it to New York's auction block. Instead, it is lost, its baffling disappearance making the symbol the more stingingly pertinent.

The Fry-Grant relationship is central if cauterized of sentimentality. Orringer captures the complications their individual foibles and flaws add to their dangerous love, brilliantly if subtly making it clear that their deepest problems are those that obtain in all romantic relationships. The best and worst that can be said of them is that they are all-too-human, at war with their own dishonesties and cruelties, both unwilled and deliberate.

A novel as suspense-driven as "The Flight Portfolio" might fly like a stealth bomber. The wonder of Orringer's is that it is hardly leisurely or prolix but nevertheless rich with telling details — not plush but deep. We're told every move of a chess game in a war zone. Orringer lavishes on the reader the sights, sounds, smells and weather of her locales, her characters' clothes (most particularly as they are serially removed at a surrealist party) and, most remarkably, their innermost thoughts and feelings, all without instructing you about them. The immersive reader is richly rewarded.