Debut story of a different man 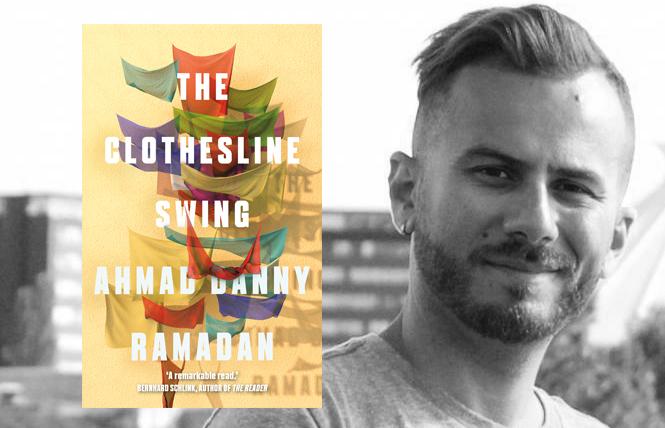 "Every stage of my life feels like a story of a different man," the protagonist in Ahmal Danny Ramadan's "The Clothesline Swing" (Indigo Press) remarks, "each one a man I don't know well." It's something legions of introspective people might say, but the brilliant accomplishment of Ramadan's debut novel in English (he's published two volumes of short stories in Arabic, and a considerable amount of journalism in English) in its first publication in the U.S. is that he puts his storyteller, Hakawati, through a particle accelerator that both distinguishes its component atomic particles and shows how they fit together, in a whirl.

There have been other fictional windows on the particular trials and specific horrors of being gay in the Middle East, say nothing of coming out there. What makes Ramadan's stand out is that he puts a string of telling details in front of us without special pleading, while giving us an account of a gay relationship in a range of cultures that shuns easy universalism while digging deep into the commonalities of gay life that cut across boundaries and borders.

Himself a Syrian refugee now resident in Vancouver, Ramadan writes with authority beyond the bully pulpit or the pity pot. To a remarkable degree, he makes the people of the Middle East, and Syrian refugees in particular, individual, thoroughly modern, sophisticated (for good and for ill) and diverse inhabitants of the 21st century. It would be achievement enough that he tears down the chain link wall that makes the refugees behind it look — to use the most loathsome of the platitudes — like losers. Having done that, he also crafts a "wherever you go, there you are" story similarly shorn of numbing generalities.

He lays out his terms right from the start: lives of horror are equal-opportunity experiences, as are love, compassion, and yes, tenderness. "I felt weak in the knees, as if I were still a young boy, crying for your attention, dying for your approval, hiding behind dumpsters." Not even the dumpsters are Syria-specific; the West, too, has its West Side stories.

"The sweetest kisses are the ones we share in forbidden places," Ramadan's brave, vulnerable novel begins. "For us, most places were forbidden. We met in war-torn Damascus and moved in together in sectarian Beirut before we finally arrived in Canada. For us, foreplay wasn't sweet touches and soft kisses; it was finding a place where no police officers, angry parents or nosy neighbours would find us." As our best American scribes have shown, this could also be Texas or Tennessee.

The realism is striking, to use an all-too-apt word for it, but Ramadan goes for the visionary, not out of authorial exhibitionism but because it's his worldview. The fractured, refracted nature of "each a man I don't know well" is the air he breathes.

Death with a capital-D is a character with character, and characteristics. He's no Keatsian abstraction (though Keats gets a nod) but a presence who's as much a mess as a menace, a kind of dead ringer (pardon the cliche) for Schigolch in Berg's "Lulu," a schlump who also has truths to tell and has a habit of turning up when things are getting most real.

It's Death who tells Hakawati, "You will be sitting by the death bed of your loved one as he dies, and slowly, you will tell him stories, trying to keep him away from my final touch." So the voice we're hearing from is a Scheherazade (Ramadan is explicit about this) staving off anything from AIDS (not named) to the ordinary, fatal transgressions of coupledom.

"The fact that I was your first lover remains a sign of danger that glows red in the corner of my mind — even now, after a million years together. I worry that I'm imprinting on you. I worry that I'm stealing you from your destiny to meet someone else." Beat that for courage.

Hakawati leaves Damascus — where Ramadan makes you feel the Syrian civil war closing in on a city that also has its Castro — for Egypt, to escape family censure — there only to encounter life-changing assaults of anonymous gang violence. Frying pan/fire. Before arriving in Vancouver there are other hops around Beirut and Istanbul before a formative return to Damascus, to say goodbye. In "free" Vancouver Hakawati's "you" leaves him to test the drug-fueled waters of sexual frenzy before the inevitable, nearly literal crawling back.

Along the way is a cast of unforgettable secondary characters, brought to life with an engraver's skill, every line a tell. A lesbian couple both of whom are named Maryam, a man named Samer you'll be thrilled to meet despite already knowing him, and an extended family of tyrants and larks stand out without distracting. Hakawati reaches peak resonance in commenting, "Our attempts to build friendships were lost in translation."

As for the "stories," they're as lyrical and terrifying as dreams. They also provide a framework for Ramadan to narrate his own exhilarating, encompassing story in a linear-time-defying cyclotron of cauterizing emotional substance.