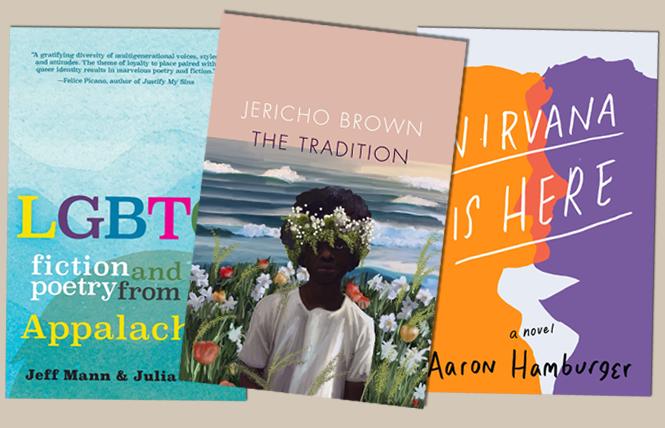 Pride 2019 is taking on special meaning with the 50th anniversary of the Stonewall riots during celebrations across the country. Visit your favorite independent bookseller or the love-it-or-hate-it Amazon.com to order copies of these LGBTQ books for readers of all rainbow stripes.

It's hard to believe that "The Tradition" (Copper Canyon Press) is only the third full-length collection by gay African-American poet Jericho Brown, because he's such an invigorating presence in the world. A poetic examination of terror, "The Tradition" uses Brown's literary device the duplex, a form that merges the sonnet, the ghazal and the blues.

In the "fore/words" to her new poetry collection "Sweet World" (CavanKerry Press), award-winning lesbian poet Maureen Seaton asks the reader for forgiveness for having "mixed up magic with grief, love with terror, light with impenetrable darkness." The Colorado poems were written during the "decision-making of breast cancer treatment."

How could a book of collaborative lyric essays by two cherished poets, straight ally Denise Duhamel and lesbian writer Julie Marie Wade, be less than supremely poetic? Fiercely feminist, political and personal, "The Unrhymables: Collaboration in Prose" (Noctuary Press) has essays based on colors, religions, movies, thresholds and inspirational women.

Everything you need to know about "LGBTQ Fiction and Poetry from Appalachia" (West Virginia Univ. Press), edited by Jeff Mann & Julia Watts, can be found in the title. The first-of-its-kind collection features poems by Nickole Brown, Aaron Smith, Dorothy Allison and Kelly McQuain, and short stories by Silas House, Fenton Johnson and others.

The latest installment in James Earl Hardy's B-Boy Blues series, "Men of the House" (IAJ Books) tells the story of Brooklyn-based high school senior Raheim, oldest child of a gay male couple, who has his hands full balancing his relationship with girlfriend Maxine, admissions offers from the Ivy League, and the creation of his identity.

In "The Stars of Locust Ridge" (Vivid Imagery), prolific writer Craig Moody takes us to the Great Smoky Mountains, near Dolly Parton's childhood home in rural Tennessee, introducing us to teenaged Genevieve and her coming-of-age.

Lesbian novelist Nina Revoyr says that her new novel "A Student of History" (Akashic Books) "is an L.A. story, but also an American story" about economic disparity, history and "invisible aristocracy."

Sexual identity and self-acceptance become a throughline in "Anatomy of a Miracle" (Hogarth), the new novel by Jonathan Miles with the subtitle "The 'True' Story of a Paralyzed Veteran, a Mississippi Convenience Store, a Vatican Investigation, and the Spectacular Perils of Grace."

Beginning in 1912 and continuing into the 21st century, "Correspondents" (Grove), the second novel by gay writer-activist Tim Murphy, author of 2016's brilliant "Christodora," is powerful and epic in breadth and scope.

Straight novelist-ally Elinor Lipman is no stranger to writing about queer characters, and her hilarious new novel "Good Riddance" (HMH) is about troubles arising from a discarded yearbook and a nosey neighbor.

In "Nirvana Is Here" (Three Rooms Press), his first novel since 2005's incredible "Faith for Beginners," gay writer Aaron Hamburger follows historian Ari on his quest to reconnect with straight high school crush Justin, while also dealing with his ex-husband, all set against the backdrop of "the meteoric rise and fall of the band Nirvana and the #MeToo movement."

Taylor Saracen joins gay authors St. Sukie de la Croix and Jim Elledge in exploring the queer past of Chicago's notorious, openly gay Towertown neighborhood of the 1920s in her novel "In the City by the Lake" (13 Red Media).

In "Todd Sweeney: The Fiend of Fleet High" (Hosta Press), gay writer David Pratt takes the story of Sweeney Todd in a new direction, setting the story in high school, where the title character and pal Nellie Lovett come to the rescue of best friend Toby Ragg.

Gay novelist Henry Alley's new book "Men Touching" (Chelsea Station Editions) is set in 1986 Seattle, as Vietnam vet Robb attempts to beat his drug addiction. His high-school teacher partner Bart is coming out to his family while dealing with a friend dying of AIDS complications.