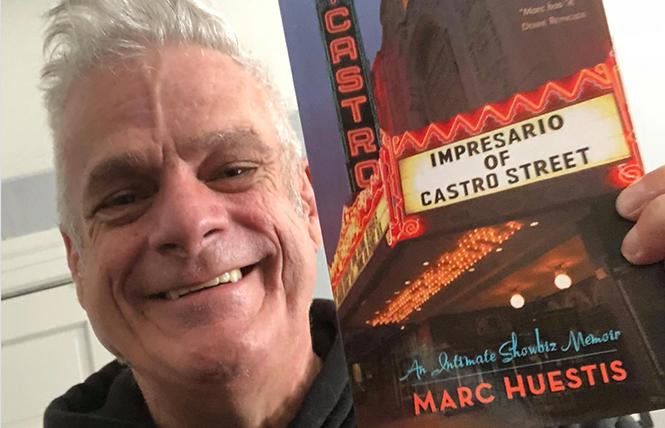 The buzz is on! Marc Huestis has just published his endlessly exciting and not infrequently moving autobiography, "Impresario of Castro Street" ($19.99). So, you ask, What's an impresario? Here's the definition courtesy of Marc Huestis: "An impresario is a producer with pizzazz."

Pizzazz! It defines Mr. Huestis himself, and powers up the book. He's subtitled it "An Intimate Showbiz Memoir." While he's right about the "intimate part" — he couldn't give more low-down dirt, or get more scandalously self-revealing — this memoir's about much more than showbiz. As a drag performer, Marc worked with the fabled theatre group the Angels of Light; as a political activist he fought with Harvey Milk; as a filmmaker, he created first-generation AIDS documentaries including "Sex Is" and the eternally charming and era-defining "Whatever Happened to Susan Jane"; as a film maven, he co-founded Frameline; and to pay for it all, he worked for years as a publicist. Finally, he pizzazzed himself into re-invention as the impresario who got scores of Hollywood legends to give up their secrets before full houses of clamoring fans at the Castro Theatre.

Fully half the book details the fun of these extravaganzas, with highlights of the star interviews included in script format, followed by never-before-heard confidences given to Marc in private, sorta off-the-record moments. There's the joy of Patty McCormack, Patty Duke, Debbie Reynolds, and Carol Lynley. There's the pathos and self-pity of Shelley Winters; the sweet, damaged, defenseless drunk Sandra Dee; and the love/hate thing with John Waters. "You can be dishy or gossipy," Marc told me when I interviewed him in his apartment that's gleefully cluttered with showbiz mementos. "But I didn't want to be nasty or vicious." When we talked, I had to pry the dirt out of him, but under his breath he whispered, "I really hated Mitzi Gaynor, and Barbara Eden was the most boring woman in the world." In the book he revels in snark, but also reveals his kindness and generosity. 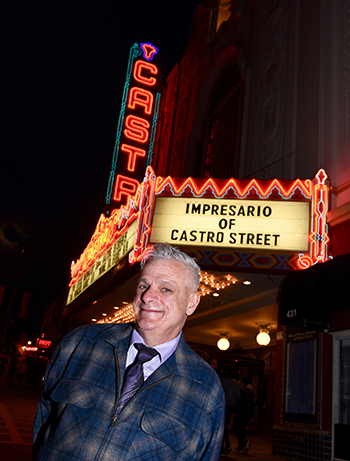 The author jubilates beneath a Midnight marquee. Photo: Steven Underhill

After 20 years of showcasing more than 50 stars in his Castro extravaganzas, Marc had one more career up his sleeve. He was going to write a book. His best friends tried to contain their skepticism as they asked, "Marc, write a book?" Nobody'd ever thought of him as a writer. But Marc did indeed write his book. Much to everybody's thrill, what Marc has produced is well-written indeed, telling all about his showbiz life, his degradation-strewn escapades and addictions, and his political activism. "I'm proud that I did it, and I feel a real sense of accomplishment. I've gotten a lot of love because of it," he added, then quipped, "You have to wait in line to be my boyfriend!"

One impressive quality of the book is its appreciable overlook of everything that's gone down here since the 70s. Over the decades he's lived here, he said, "My life has mirrored the country. I said farewell to free love, the flower-child mind-set, and embraced the hard edge of leather jackets and the fuck-you attitude of punk."

Disclosure: I'm a longtime friend of Marc's, and I'm credited with proofreading it. I think it's a really fine work, but to find out if I'm being appropriately objective, you'll just have to read it yourself.

Marc's handsome dad, a hunk named Hank, graduated from the Coast Guard into jobs as a radio technician and, most importantly to Marc's future efforts, a video editor. His mother, Matilda, had showbiz aspirations, and evolved into Marija, the Continental Gypsy. She devolved from glamorous singer-dancer to somewhat tawdry stripper; the story of her long decline is truly sad. Marc's home life was marked by abuse both physical and psychological. How bad? "Authorities were called," he told me. Throw in with his ever-rebellious nature, the boredom of a suburban childhood, and you have reasons for Marc's need to escape from a surprisingly young age into theatre, sex and drugs. Scramble these factors all together, then gangway, girl, get offa his runway.

Marc sought sex everywhere, all the time. His interest in visiting the Louvre was actually a diversionary tactic that would bring him in proximity to its next-door neighbor, the notorious cruising grounds of the Tuileries. When taking the Green Tortoise bus from Manhattan to California, he explained, he didn't mind the long trip, but was bummed that when the bus stopped at middle-of-nowhere rest stops, "filled with lonesome cowboys, truckers on speed, and smelly toilets, there was no time to trick."

Marc's travails with sex leave you both titillated and tearful. S&M sex for money, he writes, "made me feel I was worth something." Of the abject humiliation he sought ("It's so exciting!"), as well as the sex dominated by bondage and whips, seeming to punish himself for every success he had, he told me, "Perhaps because I was beaten as I child, I got confused about love equaling pain."

Sexual escapades brought him to whoring around Provincetown, where a handsome trick told him he'd love San Francisco. Natch, that was his next stop. Where, natch, he bumped into the same fellow, who invited him to be in a show. So Marc became an Angel of Light. He found it artistically swell and sexually ensnaring.

He was also snared by crystal meth. Tina. Its use allowed sexual indulgences so extreme and degrading that one can hardly believe one is reading them. They're part of the reason Marc self-published. No mainstream publisher would accept such material. "I didn't mean to scandalize folks," he told me. "But truthfully, I had no choice. I had to be open and truthful."

After retiring from his Castro Theatre presentations, Marc entered a period of self-examination. It allowed him to grow into a life of quiet (well, for Marc, anyway) comfort in the rustic cabin in the woods he bought with an inheritance. "I never had contentment," he revealed in closing. "But now I do. So, despite everything I did to make it not turn out okay, it did."