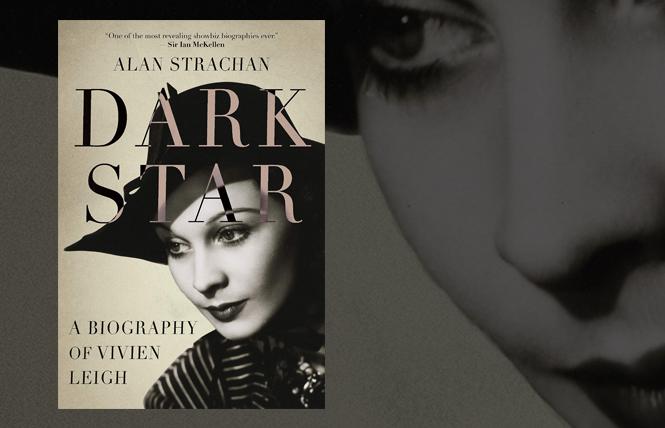 Many people regard Vivien Leigh (1913-67) as a figure from Greek tragedy: beautiful, acclaimed, plagued by mental illness, abandoned by her husband of 20 years Laurence Olivier, and living a melancholy existence after their 1960 divorce. Alan Strachan's "Dark Star, A Biography of Vivien Leigh" (I.B. Tauris, $29) carefully separates facts from legend, which began with her star-making performance as Scarlett O'Hara in 1939's "Gone With the Wind."

Vivian Mary Hartley, born in Darjeeling, India, was the only child of well-off bourgeois parents. She was educated at Sacred Heart Catholic Academies there, in England, France, Italy, and Austria. She changed the spelling of her first name to make it more feminine. In 1932, she married attorney Leigh Holman. Their daughter Suzanne was born two years later.

After studying at the Royal Academy of Dramatic Arts, she made her 1935 London stage debut as Vivien Leigh in "The Mask of Virtue." Her beauty and performance were lavishly praised. Film producer Alexander Korda signed her to a contract. Impressed, Olivier, already successful, introduced himself. They became lovers while shooting Korda's "Fire Over England" (1937), a popular Elizabethan drama in which she was first-billed.

Despite very long odds, she was determined to play Scarlett, the most coveted role in film history. She got agent Myron Selznick, producer David O. Selznick's brother, to represent her. She accompanied Olivier, still married to actress Jill Esmond, to Hollywood where he would film "Wuthering Heights." Selznick began shooting in late 1938 without a Scarlett. During the burning-of-Atlanta scene, Myron introduced him to Leigh, saying she was his Scarlett. Director George Cukor tested her. Almost at once, he and Selznick knew she, nearly unknown in America, was the Scarlett they had been seeking. The film was a smash. She won the Best Actress Oscar. Its regular re-releases kept her famous.

Divorced from their respective spouses, she and Olivier married in 1940. She starred opposite Robert Taylor in the successful "Waterloo Bridge" (1940), a romantic melodrama. With Olivier as Lord Nelson, she was "That Hamilton Woman" (1941), memorable as the notorious Emma. Again, she was first-billed, evidence that outside of England, she was more famous.

She battled tuberculosis and suffered two miscarriages. When well, she returned to the theatre rather than movies. She would make only seven more films, winning a second Oscar for her magnificent Blanche du Bois in 1951's "A Streetcar Named Desire," a role she had played in the London production under Olivier's direction. Gay author Tennessee Williams said she brought everything to the part he had intended, and much he had never dreamed of. Pauline Kael wrote that she "evokes both pity and terror," and hailed it as one of the "greatest performances" ever filmed.

Inexplicably, she failed to impress London's leading theatre critic, Kenneth Tynan. Tynan would later admit, however, that his dismissing her Lady Macbeth (opposite Olivier) was a great error, acknowledging that she had given a brilliant performance. Still, Tynan's general myopia has resulted in the inaccurate belief that she was a very limited stage actress, reliant more on beauty than ability.

"Episodes" of irrational behavior had been noted since her school days, but the public was unaware of them until 1954. She was in Sri Lanka filming "Elephant Walk" with Peter Finch, with whom she was having an affair, when she suffered a severe, long-lasting bi-polar attack that was terrifying to witness. Olivier flew over to bring her home. Elizabeth Taylor replaced her. The affair with Finch ended — he couldn't cope with her little-understood condition. Treatments included lithium and electric shocks.

She was back on screen in Rattigan's "The Deep Blue Sea" (1955). On stage, she triumphed in Jean Giraudoux's demanding "Duel of Angels" (1958). Olivier, who had had a long affair with actress Dorothy Tutin, had fallen in love with Joan Plowright. He insisted on a divorce. She reluctantly agreed.

Actor Jack Merivale became her devoted lover/companion. She returned to work in Williams' "The Roman Spring of Mrs. Stone" (1961), his favorite among movies based on his writings. On Broadway, she won a Tony for Best Actress in a 1963 musical, "Tovarich." Her throaty singing was reminiscent of Marlene Dietrich. Her sensational Charleston stopped each performance. Sadly, after six months, she had a violent bi-polar attack and left the play, which soon closed.

She portrayed American Mary Treadwell (her third Southern lady) in 1964's "Ship of Fools," her final film. She was ill throughout shooting, but her work before the cameras is poignant. She was rehearsing for the London production of Edward Albee's "A Delicate Balance" when she died from a pulmonary blood clot brought on by tuberculosis and heavy smoking.

Strachan is a sympathetic but not uncritical biographer. He effectively untangles her complex relationship with Olivier without making either a villain. They remained friends after the divorce. Her death devastated him. He also convincingly refutes Olivier's alleged bisexuality.

When well, Leigh was celebrated for her exquisite manners, thoughtfulness, elegance, bawdy language, wit, and enormous capacity for friendship. Her memorial service at London's St. Martin in-the Fields was packed with theatre royalty. Only Coward, overcome by grief, was absent.

"Dark Star" would have benefited from careful editing. For example, Strachan calls Melanie Scarlett's cousin, rather than her sister-in-law. The index is woefully incomplete. Nonetheless, this is a welcome appraisal of a remarkable artist, who, despite making only 19 movies in 30 years, was ranked the 16th greatest female legend of the 20th century by the American Film Institute.