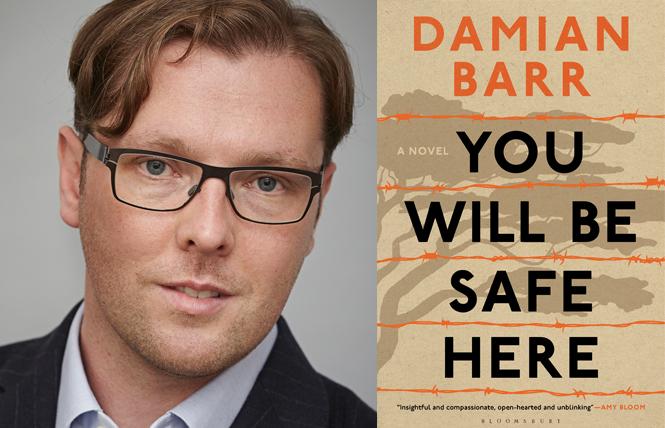 It's hard to imagine the reader of Damian Barr's debut novel "You Will Be Safe Here" (Bloomsbury Publishing) who doesn't sense that the title portends the opposite, even without the barbed wire strung over the words on the book's dust cover. Acclaimed for his 2014 coming-out memoir "Maggie and Me," Barr was writing his novel during the time Gerard Conley was writing his memoir, "Boy Erased." The books are eerily twinned narratives of the horrors of the hideously named "ex-gay therapy."

Conley's is set in the American South and first-person narrated with a realism so gritty the book has become the canonical text of an ever-growing political movement to extinguish conversion therapy. Barr sets "You Will Be Safe Here" in South Africa, which he visited for research, only its short first and shattering final sections set in the second decade of our century.

Between them is a chronicle of the previous century's Second Boer War, largely expunged from both British and South African history, when the British dispatched a quarter-million soldiers to seize the land of the native farmers (Boers) in two South African states. Barr appends "A Historical Note" to his novel, but his chillingly succinct dedication says all you need to know but didn't.

"Dedicated to all the women, children and men who died in British concentration camps and to all lost during the Second Boer War, 1899-1902," he writes. "More civilians died in the camps than soldiers on the battlefield."

Sentence by sentence, Barr's writing knocks the wind out of you without once stopping to take a bow. Phrases like, "her face half-clean from weeping" and sentences such as, "He still dreams of a letter arriving telling him he's really somebody else, a hero in another world" litter the pages, but they neither invite nor allow digression from the hurtling narrative.

The genius is in Barr's architecture. When the reader meets his present-day protagonist, Willem, on the first page, the quiet, expectant horror of the barred gates of the New Dawn Ranch to which Willem has been dispatched, by his stepfather, "to make a man of him," predict Willem's grim future still hundreds of pages off.

Between those sections we have the diary of Sarah van der Watt, begun the first day of 1901. While her husband Samuel is who knows where, with a ragtag Boer army trying to prevent what's about to happen to his family, she and her children are driven off their land by the "Khakis." "They call it Scorched Earth," she writes to her intended reader, Samuel; it's a quintessential example of the way Barr reports history, by slipping in salient details.

They're hauled off to Bloemfontein Camp, a sea of torn-tarp tents we soon realize is a prototype for Dachau near Durban. Deaths, from disease, starvation and gratuitous cruelty, are announced by the blowing of whistles, which relentlessly split the air. Sarah's attention soon focuses on her sickly son Fred, who is taken away to the camp's "house of death" hospital, where she unsuccessfully attempts a rescue with dire penalties for all.

Shortly after we reconnect with Willem a century later, he is on a school field trip to the deserted camp, whose residents are identified in desultory ways when they are identifiable at all. The kids are forced to re-enact the experience of their long-ago counterparts, and the card Willem is given is for Frederick van der Watt, gender male, age on arrival at camp six years. The astonished reader knows what Willem does not, and a lengthy hospitalization from which Willem barely survives is foreshadowed.

In as wrenching a passage as the book contains, on the return from the field trip on a bumpy bus, Willem begs to be allowed outside to urinate but is denied and pees himself. It is at that point that the accusations of other students that he is "moffie," gay, reach their peak, riotous clamor. Later, in the home of the sadistic New Dawn "General," he pees himself again, with far more disastrous consequences for even more people.

After a failed attempt at escape, he and his tentmate, fellow moffie Charles, are imprisoned in the "Bird Cage" (another echo from Bloemfontein), from whose violations only one survives.

That story emerges piecemeal in the accounts of witnesses and participants alike at Barr's fictionalized account of a famous 2015 trial of an actual boy, Raymond Buys, a real-life Charles whose death from torture we hear in grisly fragments. After each witness' testimony, Barr inserts his single "writerly" touch: post-testimony incantations, variations on the bald shame of the first: "No, they didn't know. No, they didn't know. Know, they didn't want to know." As Sarah prophesied, "It's hard to hide secrets out here with the bare soil and the bright skies and nothing but space stretching all around."