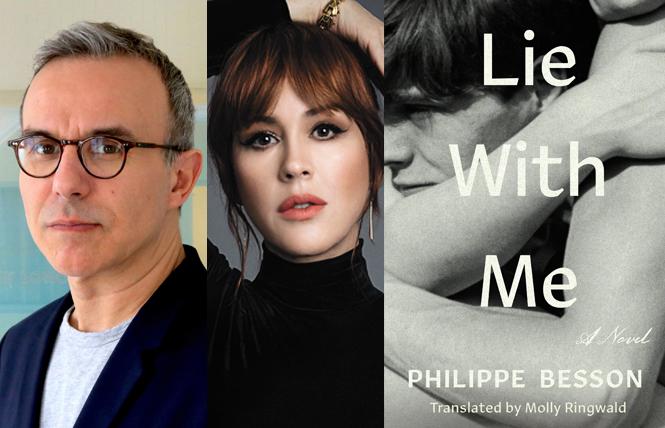 Some good writers learn to write shorter. "Lie with Me" (Scribner) is Philippe Besson's 18th book, written in 2016 in what one suspects was one of those seizures of composition that produce such searing stuff. It's a wonder not just of concision (160 pages), but also of compression and agonizing levels of compassion.

It's as immediately involving and heart-breaking a tale of gay first love as I can recall, credibly said to consume readers, as it did me, as much as it did the author. "It took Besson his whole life to write it," Lauren Collins reports in a recent short New Yorker interview with the author, "and, when he was done, he thought that he would never be able to write again."

It warrants noting that in its even younger life in English — it's just been released in a superb translation by Molly Ringwald (yes, that one) — it has also engendered some preposterous bafflegab. It's been called the French "Brokeback Mountain," to which it bears only the most passing resemblance (though Besson is said to have seen the film every day for a week when it was new), and to "Call Me By Your Name," to which it bears none.

That's what sometimes happens with writing this hot to the touch: it gets compared to something else if only to tame it. In sheer bittersweetness, "Lie" more resembles the 2013 prize-winning gay film "Last Summer," also about childhood sweethearts, except that in "Lie" bitter wins out resoundingly. There, I did it, too.

The novel's power lies in the fusion of a deeply personal story hardly unfamiliar to many a gay man. In a school in a French hamlet in 1984, the bookish Philippe first eyes farm boy Thomas Andrieu, lower than him in social class but uncommonly handsome and superior as an athlete and chick-magnet. Because Philippe already wears the brand of "faggot," the two pass each other in the hall like ghosts.

Until Thomas makes the first move. He slips Philippe a note inviting him to lunch at a restaurant far from the school. "He's already there when I cross the threshold. He arranged to arrive before me, perhaps to make sure that he wasn't followed, that we weren't seen walking in together." After confiding "that he has never done this before," Thomas initiates a series of clandestine meet-ups with the classic "I know a place." Sexual discovery hurtles into obsessive passion qualified by a baffling seesaw reserve.

Thomas declares that he is attracted to Philippe "because you are not like all the others, because I don't see anyone but you, and you don't even realize it." Then he tells Philippe "something that [Philippe doesn't] know: that I will leave."

"I should be able to stay in this state of ecstasy," the naive, thunderstruck Philippe thinks. "Or let myself be overwhelmed by the incomprehensibility of it all. But the feeling that prevails the moment he disappears is of being abandoned. Perhaps because it's already a familiar feeling." But it's Thomas who knows who will leave.

The novel is written in short segments that roam freely across decades, and to compress its plot risks making it sound like a wince-inducing weepie. But what unfolds instead is the sharp edge of genuinely recounted — and felt — particulars vanquishing featureless universality.

Between assignations come the doubts and fears of first, secret love. Having found each other, they get lost in each other. Familiarity — ultimately meeting in Philippe's bedroom when his parents are out, only to be discovered by his mother — leads, if not to contempt, then to a fatal recharging of the magnets to the poles of unwilled if futilely resisted repulsion.

Graduating "was the end of us." Philippe leaves for Paris, to learn the art of filmmaking and TV (Besson's other life), where he finds success and even a degree of celebrity. Thomas returns to the family farm, a gunshot marriage and children of his own.

Twenty years later, in Bordeaux, Philippe spots a young man who so closely resembles Thomas he says as much to the boy, Lucas, whose unembarrassed response is, "People tell me that all the time." And: "You must have liked him a lot, to look at me like that." Yet later: "My father told me about you. Once when you were on TV, he said that you went to high school together."

Years later Lucas contacts Philippe with terrible news; spoilers are superfluous. Strikingly, it's Lucas who feels the eternal return of the young lovers' first pain. "You get used to everything," he says, "even the defection of those you thought you were bound to forever."

This would be an unbearably mawkish book if every word in it were not emotionally true. Instead, it's the only thing less direct and devastating than Thomas farewell letter.