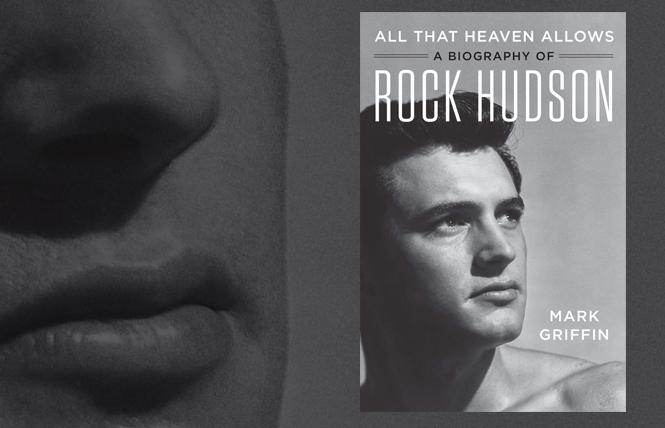 Tall, dark, handsome, buffed, manly yet sensitive: Rock Hudson (1925-85) was the embodiment of the classic Hollywood hunk in the 1950s and 60s. He wasn't a stage-trained "Method" actor like Marlon Brando or James Dean. He was a product of Universal, one of the last studios developing hopefuls for stardom. But beneath his placid image hid an ambitious professional willing to submerge his identity to attain stardom. In that sense, he personified the hidden turbulence of the "Fabulous 50s." After years of covering up his homosexuality, Hudson's death from AIDS outed him. Mark Griffin's thorough, readable "All That Heaven Allows: A Biography of Rock Hudson" (Harper, $28.99) traces his unlikely, complicated life.

He was born Roy Harold Scherer, Jr., in Winnetka, Illinois. His father abandoned the family when he was young. His mother remarried. Wallace Fitzgerald adopted Roy, giving him his name. The abusive Fitzgerald ridiculed the youth's acting ambitions and beat him when he noticed effeminate mannerisms.

After high school, Roy Fitzgerald joined the Navy. Griffin doesn't say when he had his first homosexual experience, but it was probably while in service. He came West hoping to become an actor. He worked as a truck driver. He parked outside Hollywood studios and posed against the vehicle, hoping to be noticed. Eventually, Henry Willson, a successful agent who had worked for legendary producer David O. Selznick, spotted him. Willson was gay and believed in the casting couch. His clients included many handsome young men, among them Rory Calhoun and Tab Hunter. None reached the heights that Roy Fitzgerald, re-christened Rock Hudson, would.

Hudson debuted with an uncredited bit in 1948's "Undertow," but rapidly got bigger parts. He made eight films for director Douglas Sirk, who guided him in the 1954 remake of "Magnificent Obsession" opposite Jane Wyman. This sudsy saga about a reckless playboy who redeems himself and finds love was a smash. It made Hudson a star. Universal rushed him into three forgettable films before re-teaming him with Wyman in Sirk's popular "All That Heaven Allows" (1955), playing a gardener whose romance with an older, wealthy widow scandalizes her suburban neighbors. The story hints that his character may have a hidden life.

"Confidential" magazine threatened to out him, so Willson gave them damaging stories about Calhoun and Hunter in exchange for their silence on Hudson. He also orchestrated Hudson's 1955 marriage to Phyllis Gates, Willson's secretary. The marriage didn't last long, but it quelled the rumors.

He was Bick Benedict in George Stevens' "Giant" (1956), based on Edna Ferber's bestseller about Texas. Hudson was billed after Elizabeth Taylor but ahead of Dean, with whom he didn't get along. During the lengthy shoot, he and Taylor bonded. The movie opened to good reviews and big grosses, earning Oscar nominations for Best Picture and Best Actor for Hudson and Dean, who died before filming was complete. They lost to Yul Brynner in "The King and I." Hudson's performance is sincere, but too carefully controlled by Stevens.

He was better in Sirk's "Written on the Wind," top-billed in this splendid melodrama with Lauren Bacall, Dorothy Malone, and Robert Stack. The smash movie's real romance is between the leading men. In 1957, Hudson and Mae West appeared on the Oscar telecast, memorably singing "Baby, It's Cold Outside." Griffin says nothing about that experience.

Hudson revealed a flair for comedy, enjoying "Pillow Talk" (1959) with Doris Day, a monster hit, if dated. His character coyly pretends to by gay. He made another coy sex farce, "Come September" with Gina Lollobrigida, and was reunited with Day for the even more popular "Lover Come Back" (1961). Once again his character is mistaken for gay. After two dramas, he excelled in Howard Hawks' "Man's Favorite Sport?" as a celebrated fishing expert who actually knows nothing about it, another man with a compromising secret.

In "Send Me No Flowers" (1964), he and Day were married, but the blossoms had wilted. He and Lollobrigida were "Strange Bedfellows," a tiresome comedy. "A Very Special Favor" (1965) had him again pretending to be gay to bed Leslie Caron. The films did well, and he remained among the Top 10 box office stars from 1960-65. But "Blindfold," a bad comedy opposite Claudia Cardinale, flopped, and he quickly returned to drama, without regaining his popularity.

He worked steadily in forgettable films before finding success on TV in the light-hearted mystery series "MacMillan and Wife" (1971-77), set in San Francisco. His final appearances, in which he looked gaunt and ill, were on TV's "Dynasty" (1984-85).

Over the years, he had many young, blonde, handsome, masculine live-in lovers, including Marc Christian, who threatened blackmail. Hudson left most of his $25 million estate to longtime friends, actor George Nader and his partner Mark Miller. Christian sued, was initially awarded over $20 million. He alleged he'd been exposed to HIV and was therefore no longer sexually active, a claim that was disproved. A judge reduced the award to $5 million, but he ultimately settled out of court for much less.

Hudson's homosexuality was an open secret in Hollywood, but most movie audiences were unaware of it until he became the first prominent person to reveal he had AIDS. His death spurred Taylor to lead the fight against that disease and to make it a respectable cause.

As Griffin shows. most people liked Hudson. He was professional and friendly, almost always got along with colleagues, yet was only himself with a few intimates. His estate, known as "The Castle," gave him a very comfortable closet. Griffin succeeds in revealing this complex man whose death resulted in a greater legacy than all his movie work.

Updated, 5/23/19: This article was updated to correct that the author of "All That Heaven Allows: A Biography of Rock Hudson" is Mark Griffin.