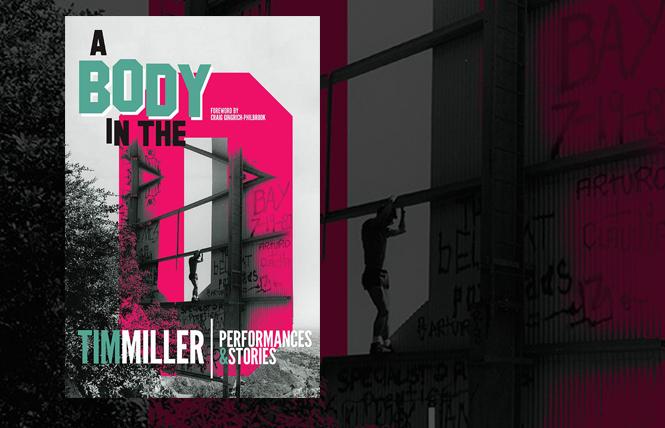 A Body in the O by Tim Miller; University of Wisconsin Press, $19.95

In June 1990, major art grants for four performance artists from the National Endowment for the Arts were vetoed, due to the controversial content of the artists' work, by chairman John Frohnmayer, an official appointed by George H.W. Bush. The politically motivated ruling incited an uprising and was soon followed by Congressional action and a Supreme Court decision in which all four artists were granted their fellowships, setting a precedent in the American arts community for future endowments.

Tim Miller was one of those artists, along with Karen Finley, John Fleck, and Holly Hughes. In his latest collection of essays and performance pieces, he demonstrates a well-honed sense of humor, a passion for queer history, and the kind of melodrama only a true performance artist can exude.

The book's introduction features glowing accolades from longtime friend Craig Gingrich-Philbrook, a writer, performer, and communication studies professor at Southern Illinois University. He considers Miller his "performance big brother," and writes that while both he and Tim survived the HIV/AIDS plague, which he considers "not over, just more deeply monetized," their representations of that poignant era live on through performance art and nods to artistic communities that managed to thrive despite dark clouds of death, homophobia, and inequality. Gingrich-Philbrook acknowledges the turn Miller's art has taken. He has taken on the role of mentor and guide for generations of queer (and otherwise) students eager to hone their interpretive talents and artistic skills.

The book starts out with its title piece, in which Miller describes how he was photographed hoisting himself into the "O" letter of the Hollywood sign in 1984 wearing "hot pants and a crop top." It's a pivotal moment in the artist's life and paves the way for future works by him and other theater performer "first responders" who "creatively spelunk into the messy stew of the injustices that surround them and step in to confront a new crisis that threatens their communities."

Miller was inspired by feminist activism and the gay rights movement as the AIDS epidemic became integral to homosexual life. His experiences with social justice, civil rights, and marriage equality, and his battle with the NEA to restore his theater fellowship, are thoughtfully reanimated here. Pages of photographs complement the text, illustrating the evolution of Miller's queer life in the arts, his travels, and stories that are entertaining and relevant.

There are also scripts from performance works, including 2009's "Lay of the Land," about the fallout from the Proposition 8 decision; and "Rooted" (2016), which reflects on the challenges Miller faced attempting to ground himself. Readers familiar with Miller's legacy will find this slim treasury a wonder; those not familiar with his electric artistry will find themselves seeking out his work.