It's curtains for Joy 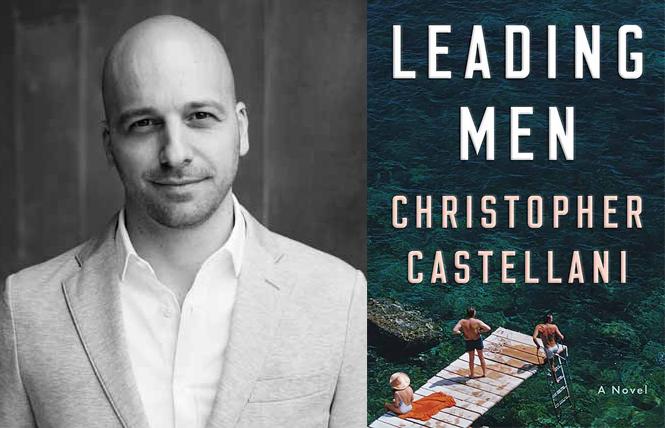 With writers and publishers working at their own, inscrutable paces, maybe it's the zeitgeist that is responsible for the spate of absorbing recent novels postulated on filling in the blanks in the biographies of actual gay men. They're kin to physicists' transfixing recent pictures of black holes. Christopher Castellani's deeply felt new "Leading Men" (Viking) exhibits another compelling aurora.

Castellani closes one of the few gaps in the memoirs and subsequent biographies of Tennessee Williams with his novel's structurally central, indelibly hallucinatory episode. His novel's larger subject, however, is the 15 years during which the Italian-American Frank Merlo was Williams' lover, companion, caretaker and, ultimately, cancer-ridden cast-off.

The gap in the historical record is 10 days in late July and early August 1953, when Williams, in Italy, declined — then at the last minute attended — a party Truman Capote gave in Portofino. The gathering introduced Williams and Merlo to American novelist Jack Burns and his opportunist lover Sandro, and, in Castellani's retelling, Bitte and Anja Blomgren, a Swedish lookalike mother and daughter.

Post-party the guest sextet make a day of what is planned as a seaside, cliff-hiking frolic. They are accosted by a gang of teenage "gypsies," one of whom is killed in the chaotic ensuing struggle. Even so, these menacing lords of the flies, "making that racket with the sticks and the rocks and their trilling voices and their eyes wide and wildly blinking," spook the company long thereafter, no one more than Anja, the principal object of their primitive lust. Before inadvertently becoming a child sacrifice, one boy takes a bite out of Anja's leg.

Williams fanatics — and people who saw the 1959 movie of "Suddenly Last Summer" when it was in theaters — will recognize the scene as an alternative version of the film's final scene, in which feral boys revel in the Fellini-esque cannibalism of a poet. Transposed to the Italian coast and with a different cast of characters, the scene's abrupt, lurid horror is captured more believably than in the film's nightmare coda. (Do surrender to the temptations of the rentable 1959 film, for which both Elizabeth Taylor and Katharine Hepburn got Oscar noms.)

Hair-raising as Castellani's writing is, he's even more probing in his account of the event's everlasting aftermath for the characters. The ghastly rite of summer is the jarring shell of the author's unflinching look at the agony of the artist's ecstasy as it plays out among the creator's supporting cast.

The continual fascination he engenders notwithstanding, the real-life Tennessee Williams doesn't come off much better in nonfiction accounts than he does in this new novel, which unsurprisingly portrays him as a self-obsessed, booze- and barbiturate-fueled child-artist with a knack for being entertaining. But Castellani's genuine feeling for the genius of "Tenn" deftly skirts cliches.

The novel's lesser characters, from gay luminaries Truman Capote and Luchino Visconti to a host of ancillary players, real and invented, queer and otherwise, are also rendered three-dimensionally. But its principals, never long out of sight, are "Frankie" ("The Little Horse") Merlo and the fictional film star Anja Blomgren (screen name Bloom). For all their eccentricities, both are more humane if not human than Tenn, and deeper and truer friends with each other than their capers with the stage-stealing Williams allowed.

"Call It Joy" is bad, or meant to be, and Anja has the only copy. A couple of young gay blades, one of them the son of Burns' Italian boyfriend Sandro, concoct a seance with Anja in hopes of acquiring the lost play. The risible ritual culminates first in Anja's nearly burning the manuscript but then in her consent to stage, direct and act in the play's hot-ticket premiere in Provincetown. Preposterous as the whole scenario is, it works until, at the last minute, the play's not the thing, and Castellani draws the curtain on the performance itself.

But the author penetrates Anja's innate reserve, reinforced by her circumstances and her practiced comfort with playing roles. Her equal in the story is not Tenn but the long-suffering, no-life-without-Tenn Frank. Castellani compensates for shutting the reader out of the "Call It Joy" premiere by pulling back the curtain on Frank's hospital death, a horror equal to the Portofino spectacle. The climactic, empty surface event is Williams' last-minute rush to his former lover's deathbed, but its core enacts the endless accommodation ("I was used to you") underlying adoration of artists, abandonment in three long acts.

We're reminded perhaps too often that the muscular, handsome Frank is (like Jack) elsewhere less well-endowed. But he's all heart, and we observe his tireless capacity to show up when it matters, right through to his own, private, bone-exploding death.