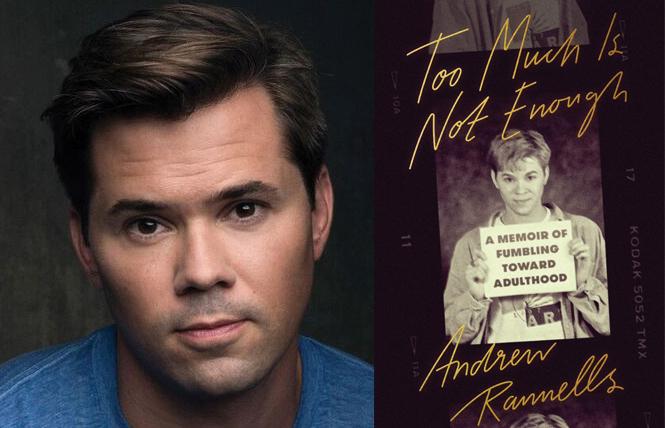 "Too Much Is Not Enough" author Andrew Rannells. Photo: Luke Fontana

Too Much Is Not Enough: A Memoir of Fumbling Toward Adulthood by Andrew Rannells; Crown Archetype, $26

"Candide" is a 1759 satirical novel written by the French Enlightenment philosopher Voltaire, concerning the eponymous optimistic hero. Evicted from the castle where he grew up, he travels with companions he encounters along the way, experiencing hardships and tribulations. But, with an instinct for survival, he doesn't give up hope. Finally he settles into a simple life on a small farm, discovering the best way to be happy is to cultivate your own garden. In his new memoir, gay actor Andrew Rannells tells the contemporary Candide-like adventure of a Midwestern boy relocating to New York City to fulfill his dream of being on a Broadway stage, and the trials he undergoes during the journey. Rannells finds his version of Candide's garden by accepting who he is and the skill set he has while learning not to care what other people think. His ultimate desire is to reconcile the boy he was when he left Omaha with the man he wants to be. Revealingly, the book's title "Too Much Is Not Enough" is from a line in the song/movie "Fame." Readers will be glad they tagged along on this frank, rewarding trip.

Born in 1978 to an advertising salesman father and a teen model mother, watching MGM and Warner Bros. musicals and the Tony Awards on TV (where he saw his first openly gay couple), Rannells knew from an early age he wanted to be a stage star. Not having the foggiest idea how, he intuited "I had to get myself to New York City." Before he arrives there in 1997, the ambitious Rannells becomes a "shameless entertainer" on the local Omaha theater scene, winning an award for Best Youth Actor.

There are chapters on his grandmother Josephine inspiring him, his sexual exploits and lousy relationships, being a student/altar boy at an all-boys Jesuit Catholic high school, and coming out to his parents (they weren't surprised) just three days before he moves to NYC, enrolling in the theater program at Marymount Manhattan College. Events did not happen the way he thought they would. His dorm verged on squalor, and he mistakenly followed the bad advice, "If you take your headshot to the stage door and give it to the stage manager, they'll call you when they have an opening." Rannells was in for a rude awakening, yet this seeming misstep unexpectedly led to an audition for "Rent," though he didn't get the role. Years later the same company cast him in "Hairspray," his musical Broadway musical debut at age 26.

We hear about his successes: meeting his BBF Zuzanna at an audition, nightclub exploits, and summer stock work in the Berkshires. But like Candide, Rannells faces challenges, such as being sexually assaulted by a priest during confession, then again at his high school graduation party, and losing his virginity to a 40-year-old man he continued to see for two years (thinking he had no other options), who then stalked him to NYC. He opts to leave Marymount after a year so he can pursue theater jobs, supporting himself with positions as a gym front-desk clerk and a Warner Bros. store-greeter. During a lousy second date, he finds out his father (in the middle of a divorce from his mother) died of a heart attack. He secures steady work touring the country for six months in "Pokemon Live!," but must play a soul-crushing gay clown stereotype, which he swears he will never do again.

Tired of bad auditions and rejections, he quit and did voiceover work for an animation production company. But he's lured back by auditioning for Rosie O'Donnell's doomed musical "Taboo," on the life of Boy George. O'Donnell tells him he's not right for the role, but show business beckons, as "it turns out I really want this."

Rannells gently disillusions anyone who thinks becoming a success happens overnight. He's best-known for originating the role of Elder Price in "The Book of Mormon" and playing Elijah Krantz on HBO's "Girls," but the memoir mentions neither of these career zeniths, stopping when he makes his Broadway debut in the chorus of "Hairspray." Even this high-water mark has its shadow side, as his actor boyfriend Todd also wanted the role, and upon hearing Rannells was cast, left him in the middle of the night with a voicemail, "I'm happy for you, but that was my dream, too. I just don't think I can stand here and watch someone else do it before me."

The book is no literary gem, but Rannells is a born raconteur with a conversational, self-deprecating tone. With Rannells, what you see is what you get, and "Too Much Is Not Enough" will be just sassy enough to enchant the casual reader.