Their non-conforming own story 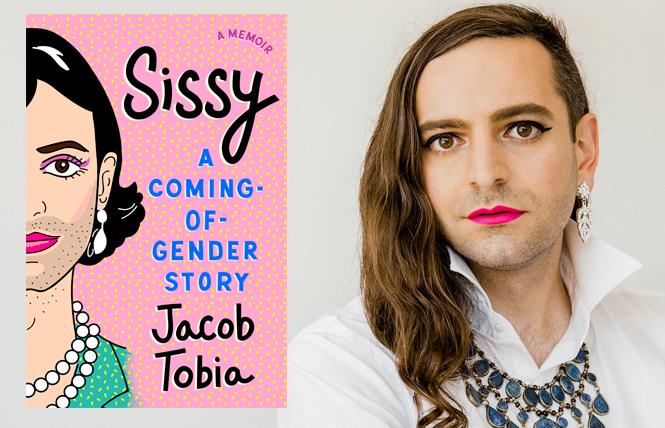 Jacob Tobia's new memoir "Sissy: A Coming-of-Gender Story" (Putnam) joins a rapidly growing, if not yet groaning shelf of books on what it is like to be trans, gender queer, gender non-conforming — that. The taxonomy alone — and the furor around each of the terms as somehow not sufficiently inclusive — speaks to the need to hear, if not precisely or wholly feel, what it's like to be trans (a word Tobia uses to self-describe). Tobia is not dismissive of the "glitter and be trans" option, but the relentless honesty of their story — and the fact that it sticks to their own story — is invaluable.

"What also frustrates me about the classical trans narrative is that it depends on trans people existing solely in the man-woman binary," they write early on. "Fitting into the gender binary, being a 'real woman' or a 'proper man,' has been baked into almost every facet of trans storytelling." Tobia's story could hardly be more original or less prescriptive. "Sissy" is no How To Do It Right book. Nor is Tobia's story one of protected celebrity or any other form of exceptionality beyond individuality.

A North Carolina-born, Arab-American (their father is Lebanese) Southern Methodist (the last, too, in some important way essential), Tobia, 28, is the younger of two male siblings, their cis-gender brother an almost stereotypical older brother minus the alpha-male grotesqueries. Their childhood comes closest to a predictable trans story in the nearly out-of-body clumsiness and ineptitude in sports and a pronounced gravitation toward girl friends (two words, sexual intimacies not played down in this memoir but almost as vanishing, as in their real life).

The gender unease and questioning is there very early on, but the part of the journey this book is best at relating is the adolescent to post-college-graduate adult. "When I was a kid, I didn't know how to handle all the anger I felt toward the world." They're among the trans people who hid in plain sight by being exceptional academically, which in Tobia's case involves acceptance at an array of prestigious colleges. Turning down Harvard for Duke University was an early, conscious recognition that exceptionality is all-too-often a mask.

There's nothing particularly out of the ordinary in their coming-out stories, either, starting in their mid-teens with a female best friend, expanding to other friends and their brother (whose inability to keep his sworn confidence evaporated minutes later in a call to his girlfriend), and a church elder, all of it in knowing practice for the big coming-out to the parents. There are tears from their mother and oscillating lecturing and rage from their father, with the church being more hindrance than help.

Being away from home, at Duke, allowed for experimentation rather than pure rumination to advance the gender quest — which, with uncommonly intuitive wisdom, they knew did not lead to simple binary choice as a clear, simple, resolution. Tobia calls their middle-school clothing preferences "almost comedic," the innate body issues — tall, dark and hairy — no fun at all, and the serious experimentation with wardrobe as gender expression spanning their time at Duke.

"The reality about gender is that we are all morphing all the time," they write, describing their own coming out — disastrously — as gay as a manifestation of the paucity of gender non-conforming role models. "For me, coming out is less like a closet and more like a software update." They soon came to the realization that "I couldn't have properly 'come out as trans' if I'd wanted to, because I never closeted my gender identity in the first place; instead, I buried it."

Stellar academic achievement led to important "study abroad" experiences, first at the UN in New York, where they walked the marble corridors in high heels, the louder, sonically, the better. When her supervisor, Minh-Thu, returned from an absence and called them in for a talk, it turned out not to be the prelude to a firing but some of the sagest counseling she got: that she was fine the way she was, but that negotiating the adult world would "merely" require constant re-contextualizing.

Easily one of the book's most vivid passages describes a charity event for the Ali Forney Center for LGBTQ youth in New York, which had been basically demolished by Hurricane Sandy. In a widely publicized event, she ran the length of the Brooklyn Bridge in five-inch heels (forgetting to practice first, but still successfully), which gained her an appearance on MSNBC.

The writing, ranging from informal to pre-inebriation bar stool, keeps the seriousness of things in context. In an introductory "Quick Manifesto" that aptly describes it, they write, "This book is a glorious failure in terms of communicating the truth of gender in conveniently digestible, bite-size pieces. But I'd like to think that that's what makes it perfect."