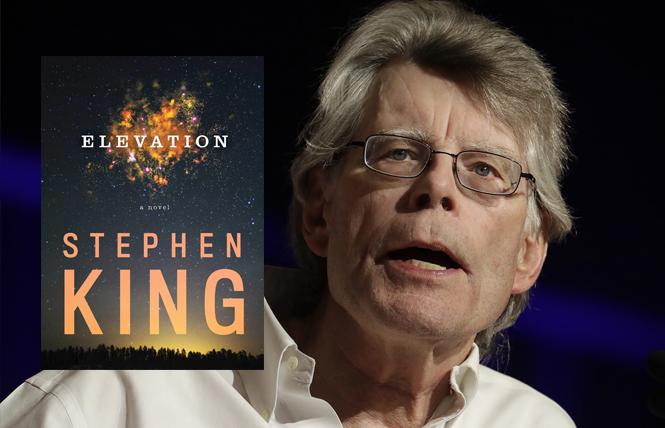 One of the ways longtime novelists keep their fan-base intact and interested over the years is to launch literary curveballs every once in a while. Stephen King, now 71 and still Maine-based after decades of publishing horror, soft-serves a new novella about being nice, and how the universe has a way of bringing people together in the real world to face the demons that divide them.

In the span of "Elevation"'s brief 160 pages, we meet Scott Carey, an athletic 42-year-old Castle Rock, Maine man, who visits a retired doctor because he believes he is losing weight yet his full-bellied appearance in the mirror hasn't changed. The doctor is baffled, and after a full examination, can offer no explanation. Is he sick or just becoming physically enlightened?

Thankfully, suburban life intervenes to distract Scott from this distressing development in the form of new neighbors, Deirdre and Missy, somewhat self-centered women with poor dog-walking habits. The lesbian married couple in question have recently moved to town, and once the local gossip mill begins to churn, so do the wheels of bigotry, prejudice, and homophobia.

Scott appeals to the women to curb their dogs, mutts who are more than happy to poop in his yard, but the women, both promising restaurateurs, are callous in their dismissal of his complaints. Nevertheless, he carries on, now reinvigorated with purpose.

Scott is a good man with a supernatural knack for promoting positivity and good-natured human kindness, but the largely Republican denizens of Castle Rock are just not feeling these lesbians — especially these "married lesbians," as a shaken friend tells Scott. It's Trump country, and the dividing line has to be drawn somewhere, right?

The protagonist works hard to battle the bullies and get the townsfolk to see the other side of the fence, as it were, but there is something else in the air, and it's magnificent.

King is known to publicly (and creatively) rebuke President Trump's actions on social media, so this thinly veiled shade-throwing will come as no surprise to the author's fans. The difference here is that it ends well, and people actually take the advice they're given to love one another unconditionally. In the end, this crisp story urges readers to rise above the hatred of intolerance, and to freely embrace diversity with grace, dignity, and a personal sense of pride. King's novel sets a great example of how humans should behave in the face of adversity, and how civility and kindness, particularly in these unsettled times, are worth their weight in gold.