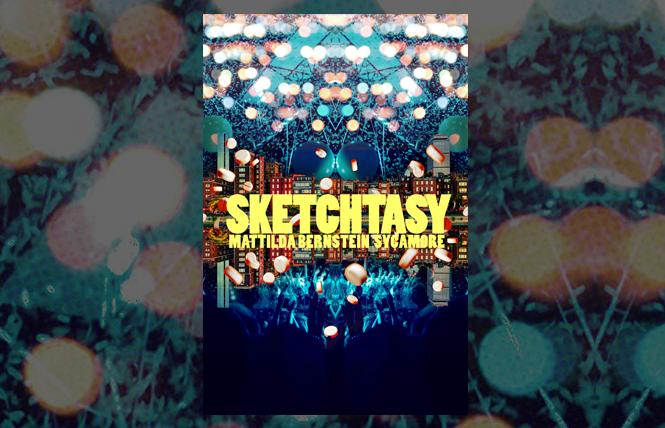 Lambda Award-winning author Mattilda Bernstein Sycamore draws from her time spent living in Boston in 1995 to inform "Sketchtasy," a coming-of-age novel combining drugs, gay culture, adventure, spirit, and a group of ragtag friends who buoy each other through thick and thin.

Manning the helm of the melodramatic rocket ship is Alexa, an outspoken, color-coiffed 21-year-old queen who narrates the novel with breakneck-speed stream-of-consciousness that migrates from annoyance to hunger to coke mirrors to gay Boston in all its 1990s sequined glam and faded glory. The bars and clubs Alexa and her pals party in ring true. Their "little youth corner" hangout in the Eagle, Sundays at the Avalon nightclub, screeching Green Line trains, Luxor, Jacques, Glad Day Bookshop (where she met BFF Polly, "the fag behind the counter"), the Combat Zone, "scary South End gays," cruising the muddy paths of the Fens, hustling at Park Square — readers who were there are in for a surreal treat.

The artificial energy of Ecstasy, speedballs, and cocaine rules the day, as does some clever banter courtesy of Alexa and friends. Alexa unravels before our eyes, hustling tricks, demanding steep prices ("a hundred is my starting point"), and visiting her therapist in an effort to process her father's sexual abuse when she was a child. She also mourns acquaintances in other cities who disappear into the great AIDS vortex. "Everywhere in San Francisco, really, you went to a club one week, and the next week the DJ was dead." The book reminds that 1990s gay life was rife with drugs, ACT UP meetings, buzzing pagers, and waves of evaporated friends.

Readers will feel the sting of pills hitting the back of their throats, the sogginess of a packed nightclub and its throbbing heartbeat, and the whirlwind of perceptions in Alexa's drug-addled mind as she navigates pain, desire, hurt, and hope. Sycamore's third novel is a kaleidoscopic carnival ride through life, love, sex, yearning, and the synergy of best friends, but it doesn't shy away from the torment of being queer.