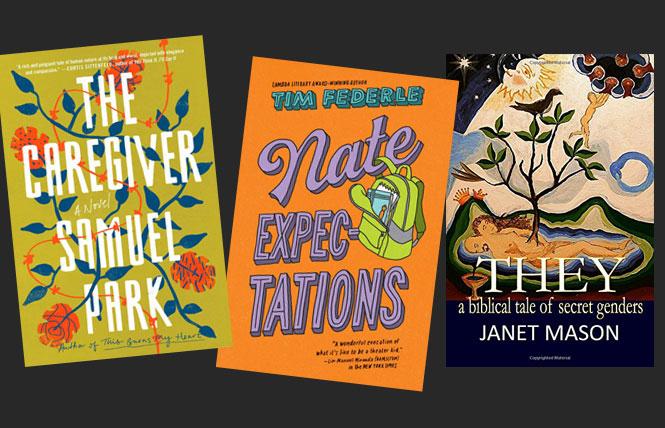 Fiction frontier: "The Caregiver" (Simon & Schuster), the gripping final novel by the late gay novelist and filmmaker Samuel Park (who died of stomach cancer at the age of 41 in 2017), draws on his Brazilian birthplace, as well as his experience with illness, to tell the story of Mara, the daughter of an actress who becomes involved with rebels in Rio de Janeiro when she is a child, and of her later life as the caregiver for a woman with stomach cancer.

A collaborative effort by photographer Nick Zinner (of the Yeah Yeah Yeahs), writers Zachary Lipez and Stacy Wakefield, "131 Different Things" (Akashic Books) follows bartender Sam and his sidekick Francis on the odyssey to find Sam's ex Vicki, who has quit AA and is out on the town drinking up a storm. Their New York journey takes them to dive bars, gay bars and rocker bars where they encounter the denizens of the night and a series of situations, combining to 131 different things keeping Sam from Vicki.

In "Nate Expectations" (Simon & Schuster), Y/A novelist Tim Federle returns to the momentum of beloved character Nate (after taking a break with "The Great American Whatever" and the self-helper "Life Is Like a Musical") that he established with "Better Nate Than Ever" and "Five, Six, Seven, Nate!" for the third and final novel in the series.

Dan Callahan, best known for his books about acting and actresses including Vanessa Redgrave and Barbara Stanwyck, turns his attention to fiction with his debut novel "That Was Something" (Squares & Rebels), in which he is able to combine his love and knowledge of cinema in a story about "a beautiful cinephile femme fatale" and a famous Manhattan photographer.

The publication of award-winning writer Janet Mason's new novel "They: a biblical tale of secret genders" (Adelaide Books) is occurring at the right time. It's the story of twins, "happily barren" Tamar ("from the Hebrew bible") and fertile Tabitha, who become the aunt and mother, respectively, to intersex twins, and their encounters with people whose names will be familiar to those who have read the Old and New Testaments.

Poetry portal: The chapbook "Revelations" (Sibling Rivalry Press) by gay poet Ruben Quesada lives up to its name. Consisting of 15 numbered poems by Quesada, and incorporating translations of poems by the late gay Spanish poet Luis Cernuda (about whom Quesada is both an expert and a translator), the work in "Revelations" exists in a realm that is as sacred as it is human.

Compiled from more than 20 years of Rafael Campo's writing life as a poet and physician, "Comfort Measures Only: New & Selected Poems 1994-2016" (Duke) features poems from six of his books (from "The Other Man Was Me" through "Alternative Medicine") and more than 30 new poems, as well as the powerful introductory essay "Illness as Muse."

Divided into two sections whose titles are borrowed from songs by Joni Mitchell ("The Urge for Going") and David Bowie ("This Is Not America"), the 32 poems in "Midnight in a Perfect World" (Sibling Rivalry) by Collin Kelley are as musical as the title, a quote from a DJ Shadow song, suggests. Kelley calls on Joni again in "Night Ride Home," as well as T. Rex ("20th Century Boy"), Marianne Faithfull and Tom Waits ("Strange Weather"), Kate Bush ("Kate Bush Appears on Night Flight, 1981") and Kylie Minogue ("I Should Be So Lucky").

Unusual punctuation aside, in her debut poetry collection "Shame Is an Ocean I Swim Across" (Feiwell and Friends), queer singer-songwriter Mary Lambert skirts being the next Jewel by actually writing something akin to poetry. Definitely of the slam variety, the poems in this collection are raw and in-your-face, on subjects ranging from body image to rape, and sexual abuse to love and hate, to beauty and acceptance, and, of course, shame.

William Reichard's "The Night Horse: New and Selected Poems" (Brighthorse Books) is comprised of poetry from the Minnesota-based gay poet's full-length collections "An Alchemy in the Bones," "How To," "This Brightness," "Sin-Eater" and "Two Men Rowing Madly Toward Infinity," as well as from his limited-edition chapbook "A breath in winter." Included among the new poems in the book, you will find "American Dream: The Brief Life and Glorious Death of Klaus Nomi."

Memorable memoirs: With an affectionate and sincere introduction by Jane Fonda, the cleverly titled "Guru" (Dey Street) by RuPaul is as radiant and resplendent as the author himself. Virtually every page features the most famous drag queen in the world in an array of drag-tastic poses dispensing various pearls of wisdom and advice, reflecting on his personal and professional experiences. It's like having a coffee table book and a consigliore all wrapped up in one appealing package.

Only a poet such as multiple award-winner Maureen Seaton could possibly have created a memoir as poetic as the Lambda Literary Award-winning "Sex Talks to Girls" (Univ. of Wisconsin Press), finally making its paperback debut. Economy of language prevails in this book with pieces as short as a paragraph and as long as a couple of pages, ranging in subject from alcoholism to sobriety, from straight to gay, from New York to Chicago.

Subtitled "A toolkit for creativity and radical self-care," the pocket-sized "creative manifesto" "How to Not Always Be Working" (Morrow Gift) by queer writer Marlee Grace is "part workbook, part advice manual, part love letter," defining "work," "job" and "breaks," and the connections to daily life. Grace offers a variety of "practical suggestions" and "philosophical prompts" for the creation of "sacred space."

Soap actor turned writer and visual artist Thom Bierdz lays it all on the line in his upfront and explicit memoir "Young, Gay & Restless: My Scandalous On-Screen & Off-Screen Sexual Liberations" (thombierdz.com). Not mincing words, Bierdz writes about the stress placed on his sexual orientation due to his Catholic upbringing, then goes into great detail about his sexual exploits, all in an effort to meet three goals: pay the rent, combat sexual shaming and determine if he overcame his "personal sex shaming/issues." You be the judge.