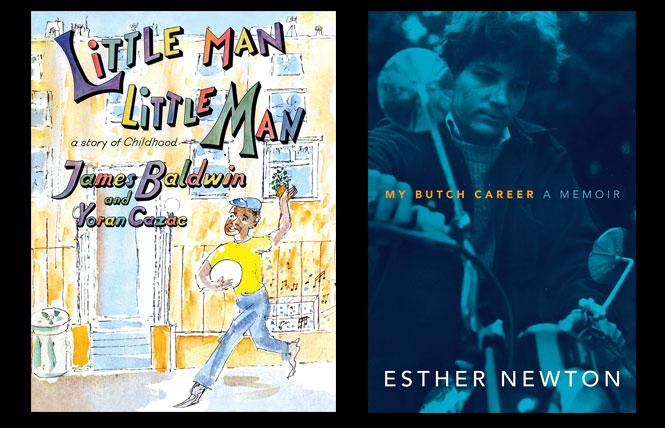 Picture this: Subtitled "a story of Childhood," James Baldwin's only children's book "Little Man Little Man" (Duke U. Press, 1976), with illustrations by Yoran Cazac, is now available for the first time in more than 40 years, in a new edition with a foreword by Baldwin's nephew Tejan Karefa-Smart, on whom the book's main character TJ is based, and an afterword by Baldwin's niece Aisha Karefa-Smart.

Molly Knox Ostertag's Y/A graphic novel "The Hidden Witch" (Graphix/Scholastic) is the visually captivating story of Aster, a boy with powers granted permission to study witchery with the female students. It features his friendship with athletic gal pal Charlie, who lives with her two dads.

A "timely parable about family values and social justice," "Liza Jane & the Dragon" (Black Sheep/Akashic), written by Laura Lippman and illustrated by Kate Samworth, introduces us to Liza Jane and the dragon she hired to replace the parents she thought she could improve on, until she discovered how wrong she was.

Coinciding with the birth centennial of her father composer-conductor Leonard Bernstein, "Famous Father Girl: A Memoir of Growing Up Bernstein" (Harper), by Jamie Bernstein, deals openly and honestly with his homosexuality.

Poet Laury A. Egan has returned with her seventh book, the novel "Fabulous! An Opera Buffa" (Tiny Fox Press). Struggling opera singer Gilbert Eugene Rose, who doubles as divine drag queen Kiri De Uwana to make ends meet, gets entangled in a dispute between a mobster and an opera producer.

Powerful sisterhood: In "A Certain Loneliness: A Memoir" (U. of Nebraska Press), Sandra Gail Lambert, who contracted polio as child, writes about "the intersection of disability, queerness and female desire" in a series of "memoir-in-essays."

Cultural anthropologist Esther Newton is the author of "Mother Camp" and "Margaret Mead Made Me Gay." Her latest, "My Butch Career: A Memoir" (Duke U.), details "her struggle to write, teach and find love" while surviving a period of intense homophobic persecution.

Lise Weil's "In Search of Pure Lust: A Memoir" (She Writes Press) follows the author's realization of her queerness, her coming out in the 1970s, and the road to inner peace she sought through Buddhism.

"Divided We Stand: The Battle Over Women's Rights and Family Values That Polarized American Politics" (Bloomsbury), by Marjorie J. Spruill, takes readers back 40 years, tracing the ongoing struggle between the women's rights movement and the conservative movement.

"Crudo" (Norton) is the debut novel by nonfiction writer Olivia Lang, written in the voice of "a commitment-phobic peripatetic artist who may or may not be" the late Kathy Acker, who died in 1997.