Celebrities done up in rubbish! 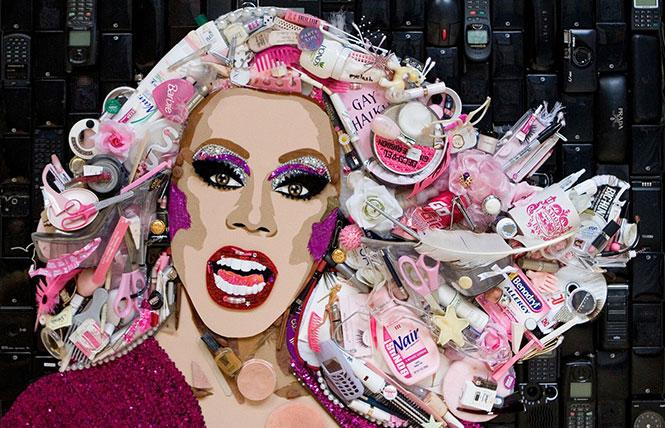 "Pop Trash: The Amazing Art of Jason Mecier," a coffee-table book with full-page pictures of meticulously crafted celebrity portraits, rolled off the presses this month. Published by Chronicle Books and written by Mecier, the hardcover glossy is available online and in bookstores now.

The portraits in the book - each made of colorful candies, computer parts, food packaging, household plastics, and items from the rubbish bin - have appeared in music videos and TV shows, and hang in the homes of celebrities and art collectors around the world. But "Pop Trash" is the first book of Mecier's work, which has been published in hundreds of newspapers and magazines, including The New York Times, The Wall Street Journal and The Washington Post. He's had numerous shows in the Bay Area, including one that opened last week at Dog Eared Books, 489 Castro St., which runs through the end of the month.

On Friday evening, July 27, publisher Chronicle Books is hosting a book launch party at Secession Arts, 3235 Mission St., where you can meet Jason, buy an autographed copy of his book, and see a few new pieces of his work. 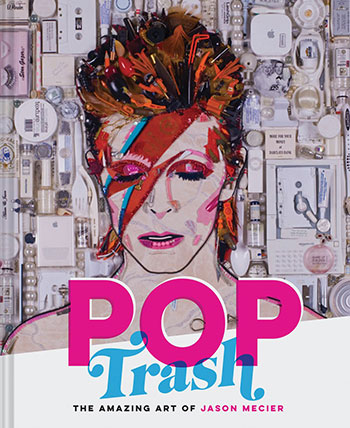 In a recent interview with the B.A.R., Mecier (pronounced MESS-ear) talked about his career and hopes for the future. Mecier, who lives in the Mission District with his partner of 27 years Adam Ansell, also an artist, has been making art since Kindergarten.

"I was inspired by my grandmother's passion to create, and mesmerized by her paintings, mosaics, weavings, collages and sculptures that fill her house and yard," he said. "I was also very impressed with her resourcefulness. She'd rather paint on the back of her cigarette cartons than buy a canvas." At his grandmother's house, Mecier worked on his own projects, learning to "create masterpieces" using materials readily available to him. "I learned from her that I can make art out of anything I want. There are no rules."

Mecier also scrapbooked pictures of his favorite shows from TV Guide. In high school, he did pencil drawings of his favorite record covers. Two - Pat Benatar and Olivia Newton John - are included in the book. Mecier's first celebrity portraits were done in 1990, when he made bean-and-noodle pieces. He moved on to yarn, candy, pills, and trash. "Anything I could find would be turned into material for my work." 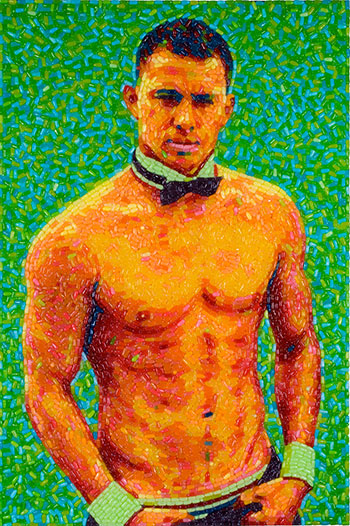 Full disclosure: I met Mecier 15 years ago when he had a show at the Glama-Rama Salon, where I purchased his portrait of Tammy Faye Baker, her hair done in pinks and reds from makeup and hair rollers, holding her dog Tuppins, made of strings and ropes.

After making dozens of celebrity portraits from junk he culled at thrift stores, stuff he imagined the celebrity might own, Mecier moved the bar up a notch and asked celebrities to send him their actual possessions. He did a portrait of Snoop Dogg made from cannabis, Kevin Bacon in bacon, Rosie O'Donnell in junk food, and the Real Housewives in macaroni. The Chronicle Books editors included most of Mecier's work in the new book, except a decade-old portrait of Donald Trump that the artist did not want to include. "I didn't want his face or name in my book."

Although Mecier has become a celebrity himself, fame in the art world is different from fame in the entertainment business, he learned. While he has received many lucrative commercial assignments over the years, Mecier found that it was grueling to create the junk portraits (which took up to 50 hours to complete) then have to negotiate a gallery show and find the right buyer for each piece. While many of the celebrities bought their own portraits, the sale often wasn't easy.

"Celebrities are used to going out to a party where they get a gift bag that may have a Rolex inside," he said. "They're used to getting stuff for free, and some seem surprised that I want to sell them the art. They seem to think I should give it to them. But who can afford to do that?"

Mecier said a lot of his favorite celebrities have sent him their junk and bought the finished art, including Parker Posey, Pink, Elvira, Margaret Cho, Rosie O'Donnell, Hugh Hefner, George Lopez, and many others. But in general "it's a hard sell to a lot of celebrities. If I didn't have this rent-controlled apartment, I doubt I'd be able to stay in San Francisco," he said. Complicating matters, tech workers are "just not that interested in buying art.

"I'm very appreciative that I have been able to make a living selling my art all these years. This book is a huge accomplishment, and I'm so proud of it." Mecier says his calendar is booked with commissions for the next couple of months. "After that, who knows? My publisher has already asked me what the next book is going to be. I was glad they asked the question, but I think it's way too soon to say."