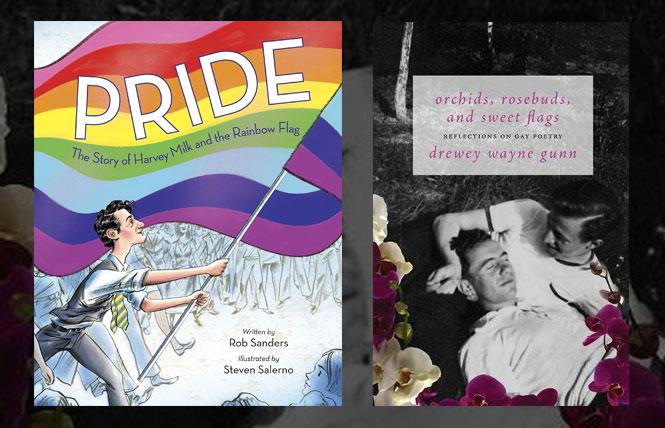 The following titles are suggestions for reading on a park bench, at the beach or anywhere the sun is warmly shining on you.

Thanks for the memoirs: Not only is Jake Shears a talented singer-songwriter and all-around magnetic performer who is, shall we say, easy on the eyes, but he's also a marvelous writer, as he proves with his first book, "Boys Keep Swinging: A Memoir" (Atria).

Following the extraordinary success of his epic 2016 bestselling novel "Queen of the Night," Alexander Chee returns with the essay collection "How to Write an Autobiographical Novel" (Mariner), in which he touches on his own personal evolution, as well as love and loss, including the AIDS crisis and the 9/11 tragedy.

Anyone who has ever read any of memoirist and educator Barrie Jean Borich's previous books ("Restoring the Color of Roses," "My Lesbian Husband") knows that the arrival of each new one is an event, and "Apocalypse, Darling" (Mad Creek Books), which ventures into toxic landscapes and wastelands both personal and environmental, is no exception.

"Hiding Out: A Memoir of Drugs, Deception, and Double Lives" (Dey Street) is queer actress-playwright Tina Alexis Allen's "audacious" story in which she untangles the knot of her upbringing, closely tied to a shared secret with her strict and religious father.

In Michael Goddart's unique memoir "In Search of Lost Lives: Desires, Sanskaras and the Evolution of Mind & Soul" (Epigraph), the writer shares the details of his recovery of more than 80 past lives, including more than 10 homophile lives.

As seen on TV: You've probably seen Claire L. Evans give a TED Talk or in music videos by YACHT (she's one half of the musical duo), and now is your chance to read her writing in her "Broad Band: The Untold Story of the Women Who Made the Internet" (Portfolio/Penguin).

Marion Ross, who played everyone's favorite Midwestern TV mom on "Happy Days," and later made an appearance on the gay 80s Showtime series "Brothers," tells her story (with help from David Laurell) in "My Days: Happy and Otherwise" (Kensington).

LGBTQ folks have long been a presence in and fans of reality TV shows, from PBS' "An American Family" to MTV's "The Real World" and Bravo's "The Real Housewives" series, and Lucas Mann's "Captive Audience: On Love and Reality TV" (Vintage) gives them something to read about.

Cultural affairs: Just in time for Pride month, and ideal for readers of all ages, the colorful "Pride: The Story of Harvey Milk and the Rainbow Flag" (Random House), written by Rob Sanders and illustrated by Steven Salerno, tells the story of social activist Milk and designer Gilbert Baker.

Almost everything you need to know about "Feminist Weed Farmer: Growing Mindful Medicine in your Own Backyard" (Microcosm Publishing) by Madrone Stewart, featuring sections on "Creating a Good Growing Environment," "Protecting your Plants" and "Harvesting your Medicine," can be found in the title of the book.

Arriving on bookshelves around the same time as Julie Cohen and Betsy West's "RBG" doc opens in theaters, "Ruth Bader Ginsburg: In Her Own Words" (B2 Books), edited by Helena Hunt, features a multitude of quotes from the trailblazing Supreme Court Justice, including those on the subject of same-sex marriage.

In addition to a couple of pages on "homosexuality," Mark Kurlansky's "Havana: A Subtropical Delirium" (Bloomsbury), queer folks such as Reinaldo Arenas, Allen Ginsberg, Josephine Baker, and Federico García Lorca, as well as the gay film "Strawberry and Chocolate," appear in the book.