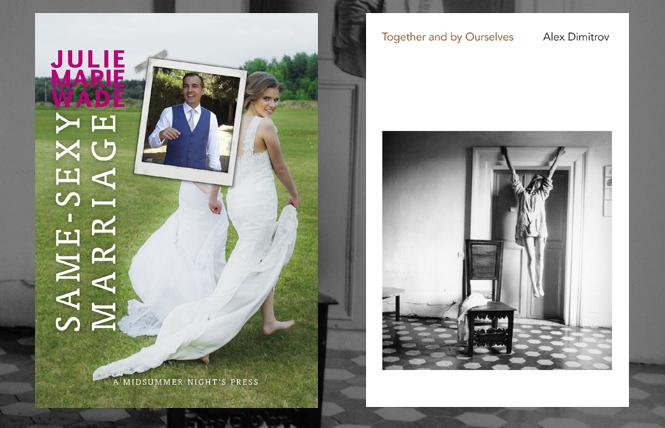 Observed every April since its 1996 launch, National Poetry Month was created by the American Academy of Poets as a means of celebrating and calling attention to poetry. Special events scheduled for the month include the airing of the star-studded PBS series Poetry in America, the Dear Poet project in the schools, events in public libraries, and the month-long O, Miami festival. If you prefer your poetry on a one-on-one basis, consider the recent titles below.

Lesbian poet Julie Marie Wade calls Same-Sexy Marriage (A Midsummer Night's Press) "a novella in poems," a fitting description for the 17 linked poems, based on a little white lie told by her mother, that are alternately heartbreaking, amusing, and always insightful.

A finalist for the upcoming 30th Lambda Literary Awards in the Gay Poetry category, as well as a National Book Award finalist, Don't Call Us Dead (Graywolf) is the follow-up to Danez Smith's award-winning 2014 debut poetry collection [insert] boy.

Recipient of a 1996 Lambda Literary Award for All-American Girl, lesbian poet Robin Becker returns with her eighth full-length poetry collection, The Black Bear Inside Me (U. of Pittsburg).

Tommy Pico, a finalist in the Gay Poetry category of the 30th Lambda Literary Awards for his book Nature Poem, completes his poetry trilogy with Junk (Tin House Press), the third installment in the Teebs series, which began with 2016's IRL.

Together and by Ourselves (Copper Canyon Press) is the second collection by gay poet Alex Dimitrov, in which he traverses the coasts in search of answers to existential questions connected to "the reality of our current moment."

The pocket-sized Take Me with You (Plume), by Andrea Gibson, is separated into three sections - "On Love," "On the World," "On Becoming" - and features illustrations alongside the one-liners, couplets and longer pieces.

Translated by David Colmer, The Sexy Storm (A Midsummer Night's Press) by Dutch novelist and children's book author Edward Van De Vendel is described as a collection of "modern love poems" tracing a relationship from first blush to last kiss.

Gay poet Philip Robinson began writing his collection We Still Leave a Legacy (WSLAL Press), dedicated to the friends that he lost to HIV/AIDS, almost 30 years ago, when he became involved with AIDS Action Committee of Massachusetts. The title poem was silk-screened as a panel on The Names Project's AIDS Memorial Quilt.

Edited by Julie R. Enszer with an introduction by Mecca Jamilah Sullivan, Sister Love: The Letters of Audre Lorde and Pat Parker 1974-1989 (Sinister Wisdom) collects the correspondence between the late lesbian poets Lorde and Parker. They share the intimate details of their lives as writers and queer women, including how each of them lived with cancer.

Not a member of the LGBTQ community but a marvelous poet, James Wright is the subject of the thorough bio James Wright: A Life in Poetry (FSG) by Jonathan Blunk. If you don't know Wright's poem "A Blessing," you owe it to yourself to read it.

The God of San Francisco: SF poet James J. Siegel's new collection knocks on the door to memory
Sign up!