Living for the city 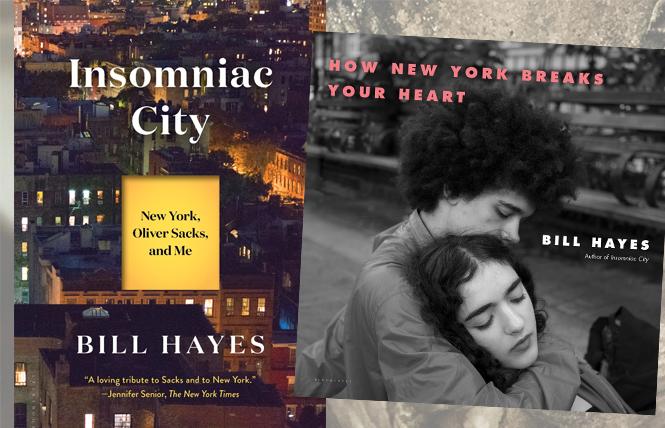 A new paperback edition of "Insomniac City - New York, Oliver Sacks, and Me" by Bill Hayes (Bloomsbury) comes emblazoned with a blurb from a B.A.R. review of the hardback. "As eloquent in its silences and visuals as it is in its telling of the secrets of the heart. The brilliance of 'Insomniac City' is that almost Tolstoy-an directness and concretion of observation, both down-to-earth and downright visionary." Sounds about right to us, but then we edited it.

Grieving after the death of his partner, Hayes moved in 2009 from San Francisco to New York. At first his observations of the life of the city - subway encounters, strangers in the park, street life - are generalized, seen as if from a distance. Gradually, Hayes becomes a true New Yorker, and the city and his place in it become more intimate.

Mostly this comes through his developing relationship with the celebrated neurologist Oliver Sacks, author of "The Man Who Mistook His Wife for a Hat" and other popular explanations of neuroscience. At first you see Hayes circling Sacks, many years his elder and much more established in his career and community. You see Hayes putting the moves on Sacks, then the older man succumbing to his wiles. He says to Hayes, "I've suddenly realized what you mean to me: You create the need which you fill, the hunger you sate. Like Jesus. And Kierkegaard. And smoked trout."

Hayes is a flaneur on the streets of NYC, and this is his record of cab rides, photos in public places, and journal entries. He describes watching the boys at a skateboard park as a gay man, but a streetwise one. There are descriptions of his intimate life with Sacks: preparing simple dinners, taking baths in the same water, going up to the roof of their apartment building for sunsets.

There's also some celebrity sizzle here: an encounter with socialite model Lauren Hutton, a visit to pop superstar Bjork in Reykjavik. At first it seems astounding that Bjork and Sacks are friends; then the similarities between their genius minds reveal themselves, and the bond seems natural. Spoiler: Sacks dies by book's end; in that sense, Hayes' tale is bracketed on both sides by grief. But mostly this is a memoir of a romance.

Hayes' street photographs of NYC are collected in another new book, "How New York Breaks Your Heart" (Bloomsbury). We get up-close and personal with ordinary New Yorkers through portraits taken by Hayes in his daily perambulations around the city. Here we see Hayes' excellent eye, and his ability to portray his subjects with intimacy and immediacy. The photos tell something about the photographer, as well: how he is drawn to people, and must seem worthy of their trust. The delectation goes both ways.