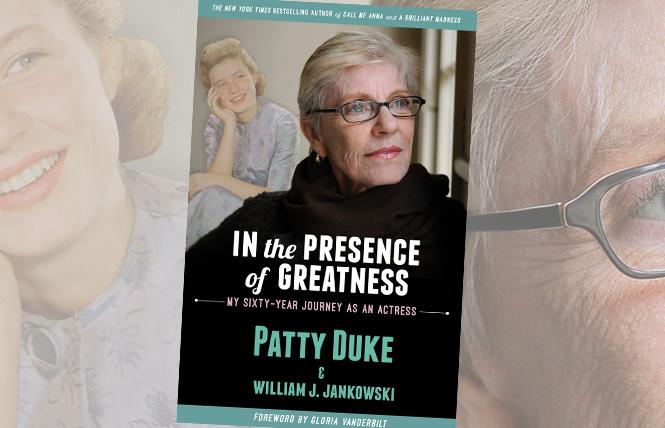 In the new book "In the Presence of Greatness: My Sixty-Year Journey as an Actress," the late Oscar winner Patty Duke reflects on her extraordinary career and the many legends with whom she crossed paths. Anna, as she preferred to be called, first rose to prominence for her portrayal of Helen Keller in the stage and screen versions of "The Miracle Worker" - it was for her work in the latter that she won her Oscar. "The Patty Duke Show," a hit TV series, followed. She then starred in "Valley of the Dolls" (1967), a campy melodrama about showgirls in Hollywood. "Dolls" has since become a gay cult film.

By the time she died in 2016, Duke had played dozens of roles on stage, in film and on television. With "In the Presence of Greatness," she shares her observations and personal memories of the many people she knew or worked with, such as the legendary actress Anne Bancroft, her "Miracle Worker" co-star. She also writes of an extraordinary afternoon spent with Helen Keller herself.

The book was co-written with Duke's close friend Bill Jankowski, who recalls becoming enraptured with Duke's range as an actress when he first watched "The Patty Duke Show," then saw "The Miracle Worker."

"I couldn't believe this was the same person," Jankowski told the B.A.R. "I thought she had to be the best actress I'd ever seen."

In 1990 Jankowski saw "Call Me Anna," a TV movie based on Duke's 1987 memoir, in which she recounted her battle with bipolar disorder. "I never looked back," he said. "From then on I had to know everything there was to know about Patty Duke. Every week I scoured the TV Guide and recorded any program in which she was featured. This continued throughout my high school years."

They became friends in 1998 after Jankowski wrote her a letter. It was a friendship that continued until the end of her life. In 2013 Jankowski asked Duke if she would consider writing a book with him about her career.

"She was more excited than I had ever expected her to be," he said. "With my being an archivist of hers, as well as having a degree in writing, she said she knew we would be a good fit working together. Plus by this point there was a 15-year history between us. She knew she could trust me, and we began working on the book the following fall when I flew back to her home in Idaho."

Duke doesn't hold back as she shares her stories, recalling time spent with her "Patty Duke Show" and "Dolls" co-stars, along with the dozens of other people she's known and worked with. As she had done before, Duke writes candidly about her battle with mental illness, lifting the stigma of these misunderstood conditions.

"Hands down, Anna was the most honest person I have ever met," Jankowski said. "When she came out publicly as bipolar in 1987, it was still very much taboo. I believe she was one of the very first celebrities to come out as having a mental illness, long before it became a popular thing to do. At the time she was also the President of the Screen Actors Guild, representing tens of thousands of actors. It couldn't have been easy for her, but the fact that she wanted to help others who were in this awful pain that she was once in was far more important to her than if she'd get the next acting job."

Duke also embraced the gay community. In the chapter devoted to "Valley of the Dolls," she recalls her 2009 visit to the Castro Theatre, where she appeared in conjunction with a "Dolls" screening. She expressed her affection for Marc Huestis, who produced the event, and wrote of her love for the gay community.

"Anna loved her gays," said Jankowski. "Growing up in show business, she was surrounded by gay people from the time she was a little girl. She never showed any prejudice against gays and lesbians. She played a lesbian in an early lesbian film called 'By Design' in the 1980s."

Jankowski noted that in 1986 Duke served as Grand Marshal for the West Hollywood Pride Parade, braving death threats to do so. He hopes that people will remember Duke not only as a powerful actress, but as a mental health advocate who sought to help others.

"A few years before she passed she was asked how she'd like to be remembered in an interview," Jankowski said. "She said she wanted to be remembered as someone who always told the truth. I believe the honesty she shows in this book proves that."