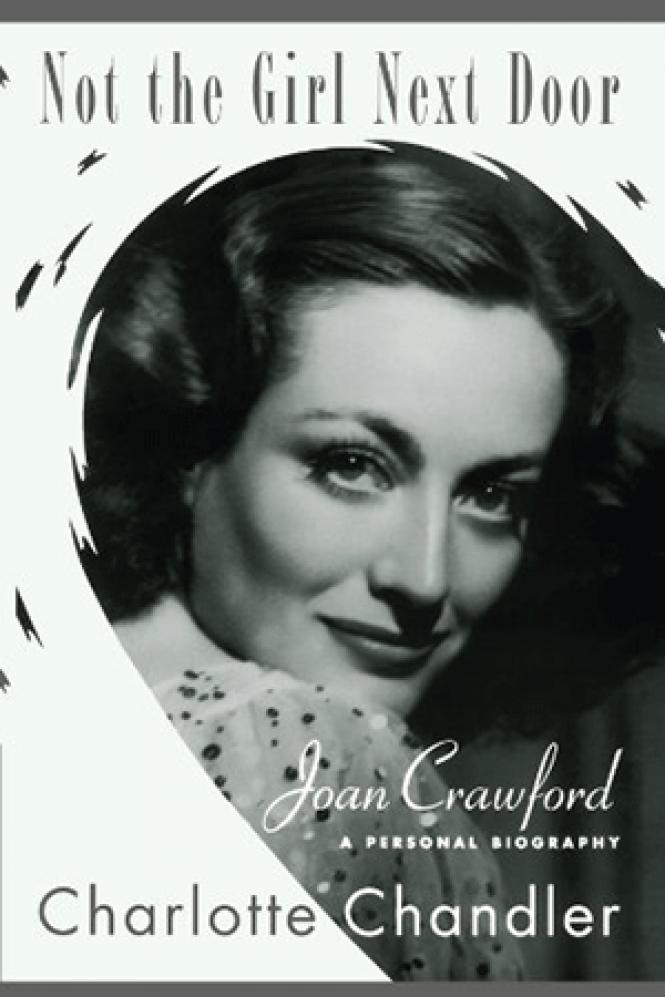 May 10th marked the 50th anniversary of Joan Crawford's death at age 71. In its front-page obituary, The New York Times said, "Miss Crawford was a quintessential superstar â€" an epitome of timeless glamour who personified for decades the dreams and disappointments of American women."

Several books have been reissued to commemorate her death. Especially interesting is Charlotte Chandler's "Not the Girl Next Door: A Personal Biography of Joan Crawford" (Simon & Schuster, $20.99), which features extensive interviews with Crawford and people who knew her well or worked with her. It's how she wanted to be remembered.

When she died, Crawford's place in classic Hollywood's pantheon was unassailable. A year later, however, oldest daughter Christina Crawford published a scathing, vengeful, unreliable account of life with mother, "Mommie Dearest." Despite its inconsistencies, questionable allegations of child abuse and lunatic behavior, and despite denials by Crawford's two younger daughters, many people believed it was true.

In 1981, Anne Bancroft withdrew from the film version after objecting to playing a one-dimensional, implausible caricature. Her replacement Faye Dunaway's dazzling performance obliterated the illogical, highly suspect assertions. The damage to Crawford's legacy was significant, but not permanent. Her achievements couldn't be denied â€" she finished 10th among the American Film Institute's Greatest Female Legends of the 20th Century. Nonetheless, absent "Mommie Dearest," she probably would have finished higher. Dunaway later regretted making the movie.

Crawford recounts her Dickensian childhood, her lack of formal education, and her early passion for dancing, which led to the chorus of a Broadway show. An MGM executive spotted her, arranging a screen test, which she passed. She arrived in Hollywood in 1925. Stardom came in 1928's "Our Dancing Daughters," and she remained one for 42 years.

In 1929, she married Douglas Fairbanks, Jr., son of one of Tinseltown's greatest stars and stepson of the legendary Mary Pickford. The uneducated, socially insecure flapper found herself attending elegant functions at Pickfair, the home of her in-laws, and after the White House, the most famous residence in America. Fairbanks talks about their intense sexual attraction, about her beautiful face and figure, her energy and unflagging ambition. She very much wanted to be a "lady," but he married her because she was a "woman." They divorced in 1935, but remained friends. Second husband, actor Franchot Tone, came from a wealthy New York family and was a founder of the Group Theatre. They divorced, but she cared for him when he grew frail. Her third husband was a handsome, minor actor, Philip Terry. They divorced in 1946. She wed PepsiCo CEO Alfred Steele in 1955. By her own account, this was the happiest of her marriages. It ended with his unexpected death in 1959.

Crawford expresses bewilderment over Bette Davis' refusal to accept her friendly overtures. Davis found them excessive and insincere. Nonetheless, they didn't feud while filming 1962's "What Ever Happened to Baby Jane?" They were civil and professional.

Vincent Sherman, who directed Crawford three times, including the then-under-appreciated but now highly regarded "Harriet Craig" (1950), talks about her sexual aggressiveness and their affair. He reveals a woman who felt compelled to use her allure to control him. Crawford's many lovers included Clark Gable, John Garfield, Yul Brynner, Kirk Douglas, Robert Wagner, and attorney Greg Bautzer, although Chandler glosses over most of them. Long before the modern gay rights movement, she was a close friend of openly gay actor turned successful interior designer William Haines. She often said that Haines and his partner, Jimmy Shields, were the only happily married couple she knew in Hollywood.

Crawford adopted four children and candidly discusses the problems she had with the two older ones, Christina andÂ  Christopher. Myrna Loy, a friend since their early days at MGM, told Chandler that those two made her glad she never had children. Crawford's self-discipline was legendary, and she sought to instill that and independence in her children. She lavished attention and gifts on them, but fearing they would be spoiled, insisted that they behave almost like miniature adults. Christina, as strong-willed as her mother, completely dominated her brother, and the two repeatedly rebelled.

Davis, like many people, expressed outrage over "Mommie Dearest." "I wouldn't read trash like that, and I think it was a terrible thing for a daughter to do. An abomination. To do something like that to someone who saved you from an orphanage, foster homes, who knows what. If she didn't like the person who chose to be her mother, she was grown up and could choose her own life." Sadly, Davis would live to see her own daughter, B.D., write an equally vicious memoir, "My Mother's Keeper."

Daughter Cathy Crawford LaLonde remembers a protective, loving mother, who in her later years was relaxed around her rambunctious grandchildren. She insists Christina, who had a brief acting career, was jealous of their mother and always wanted to be "Joan Crawford," but failed. Crawford disinherited Christina and Christopher. She left Cathy and her twin sister, Cindy, modest trust funds. The bulk of her estate went to the USO and to various charities. At Christie's auction of her personal effects, Andy Warhol bought much of her costume jewelry. One fan purchased her false eyelashes.

Crawford was a complicated woman, and Chandler's biography needs to be read along with those written by others. It is, nonetheless, a good antidote to "Mommie Dearest." Ultimately, however, what matters is her professional legacy. Perhaps openly gay director George Cukor, who guided Crawford three times, summed her up best. "I thought Joan Crawford would never die. Come to think of it, as long as celluloid holds together and the word Hollywood means anything to anyone, she never will."