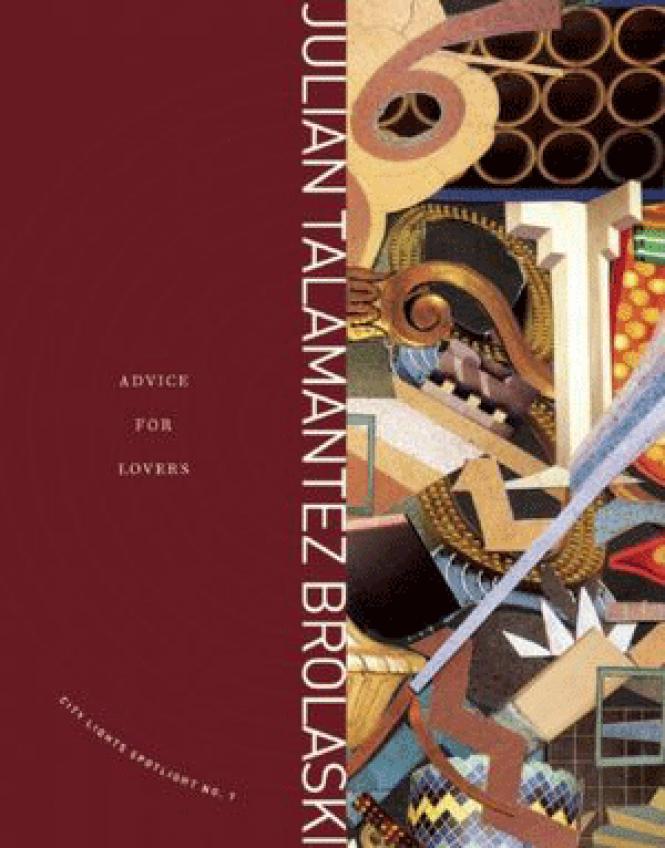 When We Become Weavers, edited by Kate Lynn Hibbard; Among the Leaves, edited by Raymond Luczak; both Squares & Rebels Books, $14.95

Poetry, for some, is the one thing that provides sustenance to the soul. To others, the simple act of reading words in precious formation soothes an aching heart or a troubled mind. Here are three newer books of poetry, all excellent examples of how the form makes reading and language such universal pleasures.

Julian Talamantez Brolaski, a prolific Brooklyn-based editor, poet, and country musician, offers his Advice for Lovers in a diminutive book with power, scope, and dedication to sexuality and "Love, that god among goddesses." It's divided into categories called Advices and Nudisms, and inspired by Ancient Roman poet Ovid's instructional elegy Ars Amatoria. There's much to gush over, and a few audacious poems that may threaten a swarthy sexpot with red-faced embarrassment.

With the brevity of a few short lines, Brolaski counsels on subjects like transforming an imaginary fascination into an actual lover ("He looks like a linebacker but he runs like a deer"), feigning courtesy ("The mouth's agog but the coach is not ready"), addressing your lover through lush Latin phrasing, or having sex with the risk of bruising: "your guns blazing to fuck me on the Grykysshe sea/ One leg toward Russia, the other Galilee."

The Nudisms section plays on classical naughty bits of sexuality, and draws heavily on Greek mythology. The push and pull of ambiguous sexuality felt by one in the public eye is best represented in Brolaski's "Ricky Martin on Homosexuality," who advises, "When it comes to love, you cannot pull a whip on your own self." The rough sex in "Fuck Me Harder" complements the phrasing in "Nautitorium," where "merely waking should release some part of me usually closed for the construction." This is the latest in locally-based publisher City Lights' Spotlight Poetry Series, prime fodder for the introspective who enjoy books that add spice to the prose of adult idolatry.

The Midwestern voices in the two new books of Minneapolis, MN's Squares and Rebels Press' latest queer poetry series are diverse, and make for entertaining reading. Collections of works by queer female and male poets, both books offer unique perspectives on their experiences of what it means to be LGBTQ and living in the Midwest.

Many of the lesbian poets in When We Become Weavers contribute several works. Standouts include Duluth, MN native Sheila Packa's five poems that reflect on the power of the female voice as "my lovely hunter"; and Julie Gard's brilliant "Ticks," damning the blood-suckers while alluding to how we rush to categorize others: "They have never harmed you, but you prosecute based on intent." Jennifer-River Eller's "Trans*Love" deliberates on the hesitation in seeking affection and sex between two transgendered lovers. In Natalie Byers' "Rumors," at a birthday party in a gay bar, a woman accidentally outs herself as bisexual, and ends up dancing alone "with the speaker."

The gay male counterpart of the series, Among the Leaves is just as impressive. Editor Raymond Luczak has done impressive spadework in compiling these voices and detailing a part of the country that is a true homeland to these men.

Scott Wiggerman's high school verse about a much-loved boy named Randy is a sweet song of forbidden passion. Whittier Strong's poignant "The Cabin" reflects on a brutal Minnesota winter and the toll it takes on a dilapidated dwelling and a girl equally at the mercy of the elements of life. Elsewhere, there's Jim Stewart's sexy snowplow men, shirtless summers, and lusty picnics, and themes of Midwestern seasons. If you don't know the Midwest, become acquainted through these fine poetry collections written by men and women who've lived and love it there.