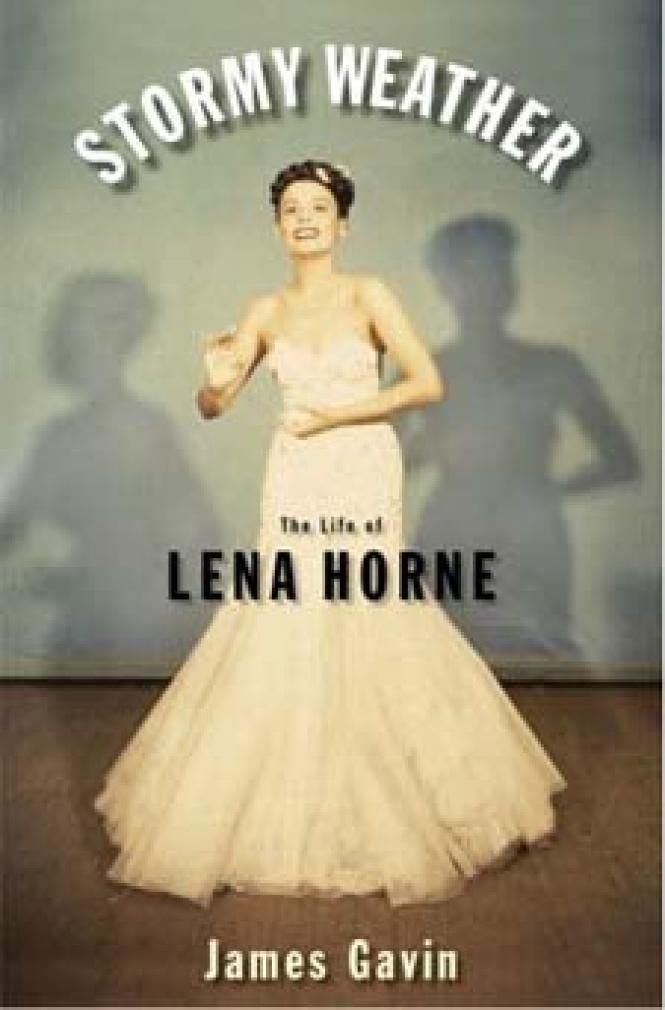 The clash between image and self-perception has rarely been so extreme as with Lena Horne (b. 1917), the African American singer who battled racism to become the epitome of soigne supper-club entertainers. As James Gavin shows in his riveting, superbly researched Stormy Weather: The Life of Lena Horne (Atria, $27), despite her success, for most of her life she has been angry and emotionally cold.

She was born into a middle-class, mixed-race family in Brooklyn, New York. Her paternal grandmother and paternal great-aunt were college graduates in an era when few women and fewer black women attained that distinction. Her grandfather was white and Native American. Horne attended   good schools, studied dancing, and learned to speak and behave like a "lady." She was cautioned against stooping to the level of racist oppressors or revealing pain. "Never let anyone see you cry," admonished her grandmother. Although intellectually accomplished, the family was dysfunctional. She "adored" her father, but he was largely absent from her life after her parents divorced.

Her mixed-race, light-skinned mother Edna pursued show business in the segregated South, taking Horne with her. There, she encountered horrifying poverty. Her light color was ridiculed by Southern blacks as a sign of white ancestry. In response, she became guarded, refusing to be hurt.

Edna, her white Cuban husband, and Horne returned to Brooklyn. Following her grandmother's death, the family moved to Harlem, where her stepfather sought work. Later, Horne claimed – unconvincingly – that she wanted to be a schoolteacher but turned to performing for financial reasons. At 16, she became a chorus girl at the celebrated Cotton Club, whose white audiences included Franklin D. Roosevelt. Horne insisted she lacked talent and had a terrible figure (skinny legs, wide hips, small breasts). Photographs, however, show her radiance. She soon got featured spots. She worked tirelessly to improve her skills, and watched famous black entertainers, including Cab Calloway, Bojangles Robinson, and Ethel Waters, perform. Waters' intense rendition of "Stormy Weather" frightened Horne, who never dreamed they would one day clash, or that she would make the song her own. Black orchestra leader Noble Sissle hired her as a vocalist, impressed by her beauty, elegance, and perfect diction.

Surprisingly, she wed Louis Jones, a middle-class black man. They moved to St. Louis and had a daughter, Gail, and a son, Teddy, but the marriage was strained. Jones couldn't get work commensurate with his skills, and she wasn't prepared for marriage. Again, she insisted money concerns forced a return to show business. They spent bitter years battling before divorcing. She kept Gail, but Teddy stayed with him.

In 1941, through Duke Ellington, she met openly gay Billy Strayhorn (1915-67), a composer, arranger, and pianist. He became her lifelong "soul mate." Strayhorn introduced her to underground Los Angeles gay life, which she loved. She would also form intense friendships with gay playwright Arthur Laurents and lesbian feminist Jeanne Noble.

She worked briefly on Broadway, filmed musical shorts, and appeared in a minor movie, The Duke Is Tops (1938), aimed at black audiences. In 1941, she signed an unprecedented seven-year contract with MGM. NAACP leaders told her she had to succeed and be above criticism – the fate of her race rested on her slim shoulders. She debuted singing two songs in Cole Porter's Panama Hattie (42). She scored in Vincente Minnelli's charming all-black musical Cabin in the Sky (43), which starred Waters, who resented her. When Horne broke a leg just before shooting a number, Waters beamed, "The lord works in mysterious ways."

At 20th Century Fox, she faced Stormy Weather (43), becoming famous and gaining her signature song. MGM devised a special make-up for her, "Light Egyptian," and dressed her in beautiful gowns, but she never again acted. Instead, in eight more films, she sang in scenes that would be cut when the movie played the South. She  claimed, inaccurately, that MGM had promised her Julie, the mixed-race heroine in the remake of Show Boat (51). But the Motion Picture Production Code required that stories about miscegenation star white actors. Furthermore, it had been planned for Judy Garland but was played by Ava Gardner, one of Horne's few Hollywood friends.

In 1947, she married MGM's premier musical arranger, Lennie Hayton, a white man. He played a key role in developing her acclaimed nightclub and concert act, which she performed for mostly white audiences in glamorous venues in America and Europe.

In 1957, she starred on Broadway in Jamaica, opposite Ricardo Montalban, and was thrilled to see multiracial audiences. Alvin Ailey was among the debuting dancers. Hollywood, however, cast  Dorothy Dandridge in two black musicals, Carmen Jones (54) and Porgy and Bess (59), and the interracial love story Island in the Sun (57). Inexplicably, Horne refused St. Louis Blues (58). Eartha Kitt played the part.

In the 1960s, she joined the civil rights movement, preferring Malcolm X to Martin Luther King. She started speaking with a Southern accent, shocking her original audiences, but allying her with "her people." She raged that little had changed in 20 years. She often turned her fury on Hayton, whom she admitted was "color blind."

She wasn't happy when Vassar-educated Gail married white director Sidney Lumet, although Horne was pleased to become a grandmother. Her brilliant son Teddy received an extraordinary seven-year scholarship to UCLA, for undergraduate and law school. But he lost interest. Worried, she enrolled him at the Sorbonne. He became addicted to heroin. He returned to Southern California, married a white woman, and had twin sons. In 1970, he died from kidney failure. She had lost her father months before. Hayton died the next year.

She triumphed on Broadway in Lena: The Lady and Her Music (81), singing magnificently while reciting familiar complaints about Hollywood. Astonishingly, in 1994, she hosted a segment of That's Entertainment III, the last compilation of musical numbers from MGM films.

Frail, she lives in Manhattan near her daughter, with whom she is close. Horne's unrelenting perfectionism, professionalism, talent, and beauty couldn't single-handedly end America's institutionalized racism. She was courageous, admirable, and difficult. Her justifiable anger and sense of victimization prevented her from acknowledging her accomplishments and influence on artists like Diahann Carroll (whom she treated coldly) and Haile Barry. Had she relaxed occasionally, she might have given herself more credit. Belatedly, she said, "Maybe I was loved more than I knew." Her recordings, however, attest to her brilliance – a legacy that will only grow.