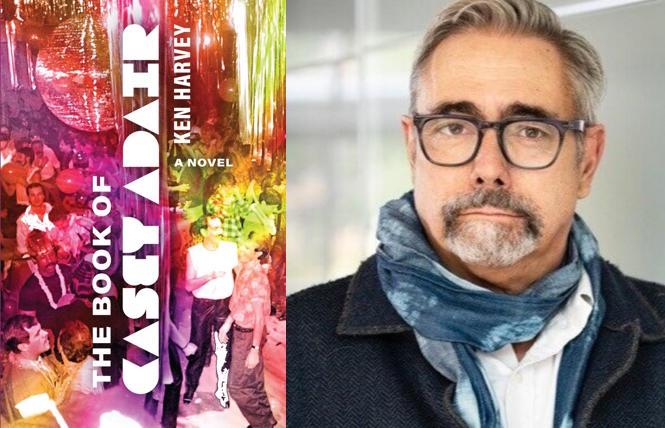 After a novel and a short story collection, Ken Harvey's latest effort chronicles the life of a young gay man in the 1980s as he wanders stateside and internationally in search of love and adventure.

Being that it's the pre-dawn era of the cell phone revolution, absent is electronic communication via email or text messaging; there is only the written word. The use of handwritten missives and journal entries form the bulk of Harvey's novel.

While this epistolary narrative style doesn't always translate well in terms of emotional heft and story flow, it does tell an interesting tale of a man's inward glance at his own motivations and queerness.

The story begins in Madrid in 1980 where innocent fresh-faced Casey Adair, a postgraduate student in Spain doing theatre research, begins penning updates to, among many others, his best pal Poppy, a privileged, well-traveled Toronto-born female confidante. To her, he confesses his most intimate emotions and perspectives on life abroad and the complexities of a seemingly endless search for true love.

Love and luck do indeed come knocking, organically even, and not the by-product of those first few nostalgic forays into crowded gay bars where "a silver disco ball spun from the ceiling while a DJ in cutoffs played records."

The passion he craves arrives in the form of Octavio, a sexy hustler intent on stealing Casey's virginity, though his method of unceremoniously lathering up with hand soap to "make it less painful" forms nothing short of a cringeworthy visual. Casey falls into a fog of unrequited love, while his roommate Gustavo proves a source of inspiration as a political doctorate candidate.

Marring these carnal and intellectual joys is the increasing unrest in Spain as the region undergoes a major political upheaval.

Fast-forward three years to Casey returning to America, Boston specifically, to work as an educator. As the novel progresses from this point, Casey incrementally loses the innocence he held so dearly back in his Madrid days. He carries over his burgeoning interest in political activism and social justice first formed in Spain to begin protesting against the American government's inaction in relation to curative intervention in the AIDS epidemic.

As Casey discovers that AIDS took Octavio's life and is now systematically decimating an already gravely discriminated population, author Harvey injects some very timely details into the mix like the work of Boston's AIDS Action Committee and Fenway Community Health Center, the political outrage and leadership of Larry Kramer, Ronald Reagan's inaction, and the hypocrisy of hyper-monetized televangelism. He also deep-dives into making up for lost time in his role as an absent father to daughter Grace.

The result is a colorful, eventful, vividly written yet bittersweet whirlwind of emotional conflict, intensive introspection, and the kind of self-analysis many readers will easily relate to.

This author-reader connection will seal the deal in creating a book that is memorable, relatable (particularly for readers who have lived through the AIDS epidemic), and resonant.

Though the novel ends rather abruptly, it resolves many of the loose ends in Casey's life as he begins to enjoy life as a loving partner, father, and a relatively content gay man.

The Book of Casey Adair by Ken Harvey, Univ. of Wisconsin Press, $18.95