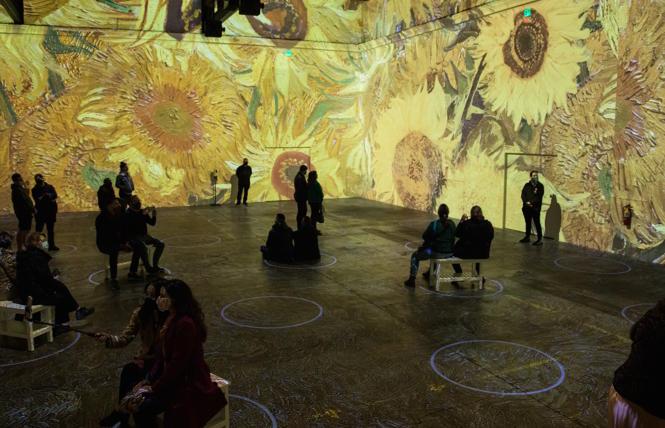 After a year in which many of our cultural activities have taken place on screens and in cyberspace, San Franciscans are itching to get back to the terrestrial arts scene.

Surely that's one of the reasons that the public has been gobbling up pricey tickets to Immersive Van Gogh, the blockbuster touring exhibition in residence through September 6 at SVN West, the massive event space and former Honda dealership, at the intersection of Market Street and Van Ness Avenue.

Having attended a preview just prior to the show's official opening, I can confirm that the sensation of being completely surrounded by animated highlights of the Dutch master's oeuvre while buffeted by a thunderously amplified soundtrack is great fun and sometimes even a bit uplifting. That uplift is provided by the brushstrokes of Van Gogh —captured in all their textural glory in extraordinary high-resolution photography— and the wizardly technological choreography of Show One, the Toronto-based production company behind this touring spectacle.

But let's be honest. This show has much more in common with our cultural intake during the pandemic than with our best pre-COVID art experiences. It's a digitally mediated, largely antisocial experience. This is emphasized by the social distancing circles projected on the venue floor which keep visitors safely cosseted within their own pods rather than intermingling with strangers in real time.

One of my favorite things about going to museums is the carte blanche they give you to look at other people looking at art, to gauge your impressions against the looks on other patrons' faces and their comments to each other about the work. Here, it's too dark to enjoy your fellow exhibit-goers' changing facial expressions as they get dive-bombed by scary Van Gogh crows or marvel at the gorgeously unfurling iris petals that, to this viewer, provide the show's most stirring moment.

And that audio system makes eavesdropping an impossibility. It's so loud, you can barely share your thoughts with whoever you're attending the show with. None of this is a bad thing. It's just not the thing that many commentators and promoters want to suggest that it is. Immersive Van Gogh is no epoch-ending opportunity to vote with your feet for the distinctive joys of pre-pandemic society. It's just a higher-browed sibling of The Museum of Ice Cream. No harm. No foul. But no return to lost glory. 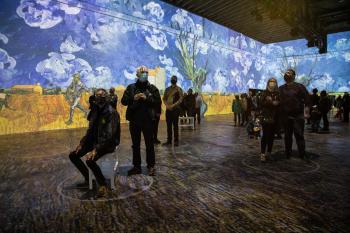 Tips and trips
To get the most out of your immersion, I'd suggest prepping for the show in one of two ways:
The first, if you're interested in art as much as spectacle, is to bone up on Van Gogh; there's no audio narration incorporated in the show, nor are there biographical texts or backgrounders on any of the featured works posted on venue walls to read as you wait in line for your timed entry to the main auditorium.

The looping presentation runs for 38 minutes, and you'll need a good hour if you want to catch most of the details. At the very least, check out these nicely done —and oddly under-publicized— free audio introduction to the exhibit, which explains some of conceptual designer Massimiliano Siccardi's rationale for his selection and organization of paintings highlighted in the show's projections.

To access the recording, scroll halfway down the About page on the Immersive Van Gogh website.
My second recommended approach is to partake of your favorite sensory enhancement supplement in advance of attending to enjoy a double dose of artistic communion: Van Gogh himself was no stranger to the hallucinogenic effects of absinthe and paint fumes; and from 1968 to 1971, the show's Van Ness and Market venue was Bill Graham's Fillmore West, host to shows by the Grateful Dead, Jefferson Airplane and other advocates of psychedelia.

If you choose this approach, please use a ride share service or public transportation.