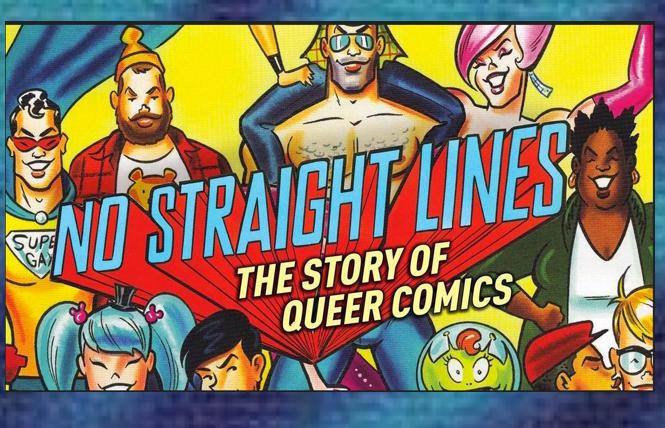 If ever there was a documentary subject that was long overdue, it would have to be that of LGBTQ+ cartoonists and comic book creators. Fortunately, Peabody Award-winning filmmaker Vivian Kleiman saw fit to do so with her respectful exploration of the art form No Straight Lines: The Rise of Queer Comics (Compadre Media Group). Based on the celebratory anthology of the same name edited by Justin Hall (who served as co-producer and consultant), No Straight Lines rises to the occasion.

The extensive interviews with established (Alison Bechdel, Jennifer Camper, Rupert Kinnard, Mary Wings, and the late Howard Cruse), as well as "Next Gen" (Maia Kobabe, Gaia WXYZ, Alex L. Combs, Taneka Stotts, Dylan Edwards, Marinaomi and Carlo Quispe, to name a few) illustrators provides historical context and a glimpse of the present and future. Notably absent interview subjects, include Diane DiMassa (Hothead Paisan), Tim Barela (Leonard & Larry), and Eric Orner (...Ethan Greene), but they do have representation in the movie in overt and subtle ways.

Like countless other genres in which LGBTQ+ visibility was lacking, the world of comics came into its own in the post-Stonewall period of the early 1970s. Taking some inspiration from the freewheeling world of underground comics sold in head shops, which didn't adhere to the conservative Comics Code Authority, publications and their associated characters began to emerge.

No Straight Lines traces the history, which includes the appearance of comic strips in regional and national LGBTQ+ publications, the birth of zines, and the triumph of the graphic novel, exemplified by Bechdel's acclaimed, award-winning Fun Home, which was transformed into an equally lauded and award-laden Broadway musical.

Hearing Cruse, Bechdel, Camper, Kinnard and Wings talk about their processes and personal experiences is also meaningful. Especially powerful is the scene where Denis Kitchen (of Kitchen Sink Press) visits Cruse in his home and they talk about how they came to work together.

Equally moving is Bechdel describing her beginnings as an artist and her Dykes to Watch Out For series, how she created Fun Home and her response to the phenomenon that it became.

When Kinnard, creator of the whimsical The Brown Bomber, the first serialized queer black character in comics, tells the story of becoming a paraplegic following a car accident, and the response from his fellow artists, many viewers will surely be moved to tears. The same holds true for Camper's discussion of the impact of the AIDS crisis on the community as a whole.

While many of the longstanding artists continue to create new work, it's reassuring to know that the many "next gen" makers are making their mark on readers from every stripe. Director Kleiman also deserves praise for the way she brings the cartoon images to life throughout, making the doc both and enlightening and entertaining experience. Rating: B+