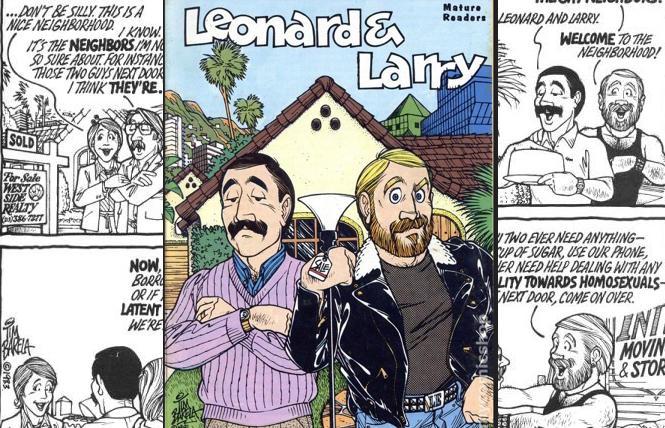 Barela, whose final comic strip ran in print almost 20 years ago, is celebrated in The Complete Leonard & Larry Collection (Rattling Good Yarns Press, 2021), featuring forewords by Charles Solomon and Andy Mangels, and an introduction by Barela (as well as blurbs from Chip Kidd and Bechdel).

To his credit, Barela also manages to effortlessly pull of being meta on a few occasions. All of this and more make this book a must- have. Tim was kind enough to answer a few questions about his career in autumn 2021. 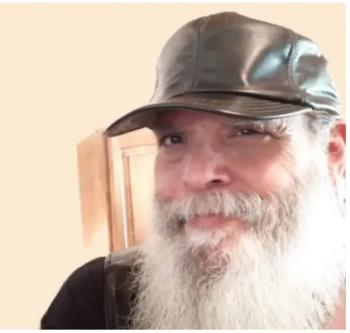 Gregg Shapiro: Tim, I'd like to begin with the basics. When did you become aware of your talent for drawing and visual art?
Tim Barela: I just always drew as a kid. I never knew a time when I wasn't interested in drawing or understood the basics of art. It came naturally. When I got to grade school, what I couldn't understand was that most other kids didn't get it the way I did, that all they could do was draw clunky stick figures and worse. They didn't grasp the mechanics of drawing shapes and shading and perspective. I guess, for me, it was just instinctive somehow.

Who were some of your influences when it came to illustration?
My influences came from all over. I can't really pin down one influence in particular. I absorbed it all. I was fascinated with just about everything about the art world that I came in touch with. 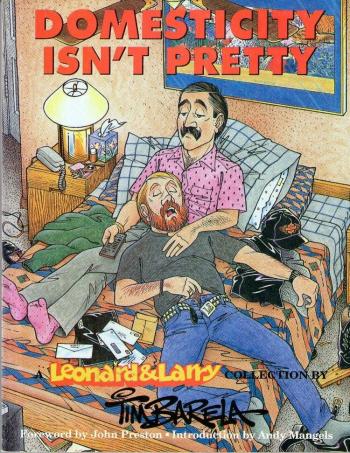 Who were some of your influences when it came to illustrating comics?
The same goes for cartooning and cartoon illustrations. Most influential was what I saw on TV and in newspaper funny pages. But as far as the development of my personal style, I think the most significant influence was a cartoonist named - if I remember correctly - Dave Berg who drew features in Mad Magazine. He had a realistic, cartoony style that I really liked and tried to emulate.

I can certainly see Berg's influence. One of the things that stands out is the detail in your drawings, from rain on a car to the various shapes of noses to male pattern balding to fashions of the period.
The funny thing about your pointing out the unique features of my various characters is that so many previous reviewers have always complained about not being able to tell them apart, who was who, that everyone looked alike. When I drew Leonard & Larry, I did try to make everyone individual and unique. Whether I succeeded or not is in the eye of the beholder, I suppose. As far as fashion was concerned, I always thought I was really bad at it. Mostly, I don't care much about fashion and barely notice what people wear. At least until I needed to pay attention for something I was drawing.

Staying on the subject of the various characters in the Leonard & Larry series, what are the challenges and rewards of juggling multiple storylines and characters?
It would be boring if there weren't other, secondary characters with situations and storylines of their own. It's more like real life when you can deviate from your main characters' lives and explore the lives of other people in the universe you've created. 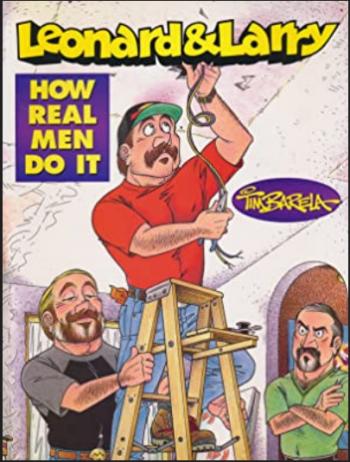 Seeing as how the characters age over time, as they would in, say, a novel, do you begin the process by writing an outline or creating a timeline?
I never do outlines or timelines. I just come up with characters and situations and figure out how they relate to each other. It goes from there. Everything about my storytelling just evolves organically.

Because Leonard & Larry was serialized, were there other serials, perhaps Armistead Maupin's Tales of the City (which you reference in the book) owing to the gay subject matter, to which you can see parallels?
Tales of The City was very influential as far as my storytelling goes. I regret to this day being such a gushing fan the first time I met Armistead Maupin at a signing at a bookstore in Belmont Shore in Long Beach. By the time Armistead came to a signing in San Francisco, years later, with me and several other cartoonists, the tables were turned. I had my own gushy fans to deal with. But yes, Armistead was a big influence. After all, I've never been a gag cartoonist. I tell stories, with jokes and gags. That's how my characters work best in my head and on paper.

How much, if any, of Tim is in Leonard or Larry, or any of the other characters for that matter?
There are a lot of different aspects of my personality in all my characters. Both Leonard and Larry. But Jim, Larry's employee, probably has more of me in his character than any of the others.

Larry owns Larry's Leather, a shop on trendy Melrose Avenue. Your recent book launch was held at The Barracks, a leather bar in Palm Springs. Would you please say a few words about your association with the leather community?
I've always been associated with the leather community. I used to be a real, Harley-riding biker, after all. I got my start drawing cartoons for motorcycle magazines, long before Leonard & Larry came along. And I've never been able to keep bikers, leather and the occasional bit of kink from creeping into my storytelling and cartoons. 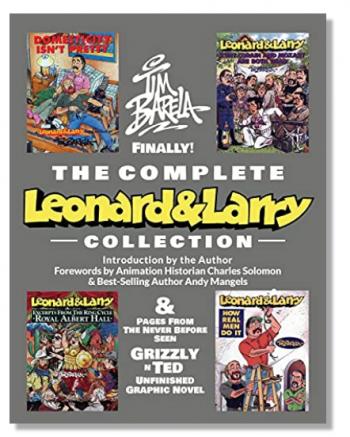 Your fondness for classical music also plays a role in the series. Are you just a fan or are you also a musician?
I'm just a fan of classical music. I always have been, ever since I discovered the genre as a ten-year-old with a transistor radio. I've had lots of musician friends over the years, but mostly pop and rock. I used to do art for album covers in the '70s and '80s. As a former voting member of the Academy of Recording Arts and Sciences, I've attended the Grammys more than once. Music has always been a big part of my life. But personally, I have no musical talent or inclination to play a musical instrument, whatsoever.

Beginning on page 103 and continuing through much of the book, the ghosts of Tchaikovsky and Brahms make repeated appearances, offering counsel to some of the characters. This reminded me of the irreverent Netflix cartoon series Big Mouth, in which the ghosts of Freddie Mercury and Duke Ellington regularly appeared to talk to the characters struggling with puberty and sexuality issues. Are you aware of Big Mouth and is it possible that the ghosts in the show are an homage to what you did with Leonard & Larry?
Brahms and Tchaikovsky were just one of those quirky, weird ideas you come up with when you can't think of anything better or funnier to put on the page. And strangely, it worked. Interestingly, both real men were born on the same day, May 7, but not the same year. They were both 19th-century musicians and composers and absolutely hated each other and each other's music.

I thought it would be funny to have them stuck together in the afterlife, one straight, the other gay, constantly bickering and insulting each other and commenting on things like a Greek Chorus. They haunted classical music-lover Jim's dreams and literally haunted his husband Merle. It was oddly funny, and my readers loved them.

As far as the animated series Big Mouth and their two famous, dead, musical characters are concerned, I've never seen it. In fact, I wasn't even aware of the show until you brought it up. If what I did in L&L years ago was some kind of influence, I'm flattered. I always used to be told that practically every other producer in Hollywood had a copy of Frontiers Magazine or one of my books on his desk. Glad that they could eventually use some of my ideas, if that's the case. But you'd have to ask the creators and writers of that show if they did.

I'm going to go out on a limb here and say that, with a surname such as Barela, you probably aren't Jewish. And yet you have flawlessly captured the mishegas of Jewish co-lead character Leonard's mishpucha.
[Laughs] You're right, I'm not Jewish and never have been. But my family always had Jewish neighbors or friends, and I've had Jewish employers and editors. Jewish characters have always just been a part of my mix, and always will be.

The book closes with a new, 2021 four-panel comic by you, your first in several years. How did this come about?
My current editor and publisher, Ian Henzel, insisted that the story in my new book, which ends abruptly because the strip was canceled back in 2002 and no one else wanted to pick it up, needed to have a sense of closure. That the new book, as Ian put it, needed "a bow" on it. And he was right. And since my strip took place in real time - one of only three North American comic strips to ever do so, I can proudly say, and my characters aged, I thought it would be fun to do a sort of "where are they now" kind of cartoon to close the book with. To show that Leonard and Larry are still around, but like the rest of us, they've both grown old. And yet, nothing about their relationship over these long years has changed all that much.