'Women: From Her to Here' at Chinese Culture Center 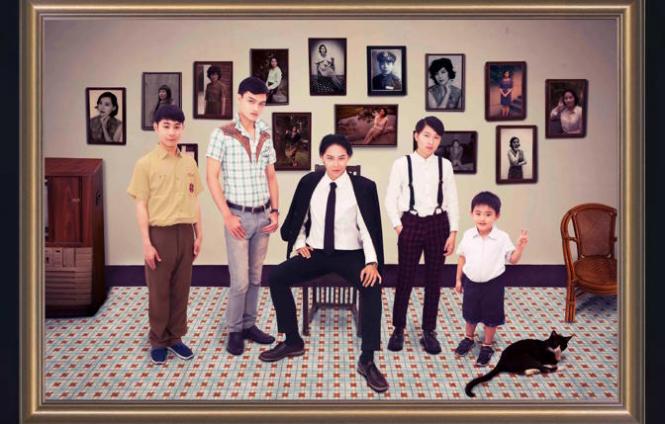 Now on display at the Chinese Culture Center of San Francisco (750 Kearny, inside the Hilton Hotel) is Women: From Her to Here, an exhibition of works by women from the Asian diaspora, many of them queer-identified. The exhibit features paintings, videos, photos, and a collection of LGBTQ zines from around the globe. The show, which will remain on display until August 28, explores agency and belonging in queer and feminist communities.

Women: From Her to Here offers pieces from a diverse array of artists from across various sexual and gender identities. Artists hail from the Bay Area, Taiwan, Honk Kong, China and elsewhere.

Some of the works are simple, such as series of paintings by Chelsea Ryoko Wong, an artist who seeks to present the diversity and style of her San Francisco home. Scenes depicted include a painting inspired by Osento, a lesbian bathhouse operated on Valencia Street from 1980-2008, as well as a look at Li Po Lounge, which continues to do business in Chinatown and was once a safe haven for gay men during police raids of the 1940s. 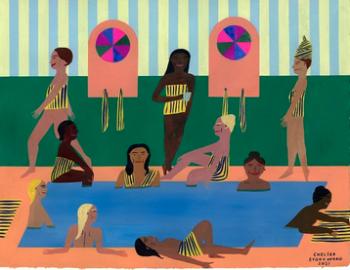 One of Chelsea Ryoko Wong's watercolors, 'Bathing on Valencia Street' (2021)

A display of queer zines from the Queer Reads Library presents 20 titles that suggest how queer people find each other.

Another piece, Ever Wanting (for Margaret Chung) is a hypnotic experimental film that explores the life of Chung, the first American born Chinese female physician. Though closeted during her lifetime, Chung experimented with male and female gender presentation and had relationships with a number of women.

"I feel that queer Asian diasporic experiences is a complex yet often marginalized perspective," said exhibition curator Hoi Leung when asked why she put the show together. "As someone who identifies as a queer immigrant from Hong Kong, I always wanted to display queer Asian diasporic expressions as an entry point to explore what it means liminally, occupying an in-between-ness that is both daunting and freeing."

Leung added that she wanted the show to speak to Chinese Culture Center's intersecting communities of Asian Americans, queer and trans people of color, and immigrants.

"I selected works that can connect artistic dialogues advanced by women, feminists, and the LGBTQ+ community both hyper-locally within San Francisco's Chinatown neighborhood and artists from across the Asian diaspora," she said. "I try to highlight relational stories, movements and spaces in the San Francisco Bay Area and present them alongside a range of Asian-diasporic artistic perspectives." 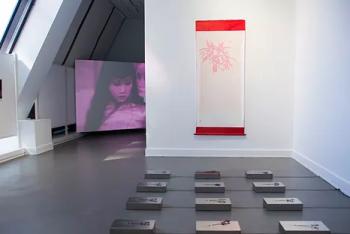 Chen Han Sheng's mixed-media installation, 'When I was a Child' (2020)

Leung feels that it's important to include a broad range of disciplines in the show, "where every work not only represents queer and feminist identities, but also fully embodies queer and feminist sensibilities," she said. "For me, all the works break boundaries within their disciplines and push against the status quo in some way."

One of the simplest, loveliest pieces in the show is a thirty-minute film, Coby and Stephen Are in Love. This documentary by Luka Yuanyuan Yang and Carlo Nasisse paints a living portrait of Coby, a retired 92-year-old dancer who appeared in Chinatown nightclubs, and Stephen, a 74-year-old retired experimental film director. They fell in love during their golden years, and whenever they went out together, they wore matching outfits made by Coby. The film follows them together as they prepare for their farewell dance in Las Vegas.

"Under the current climate of Asian hate and violence, Women: From Her to Here is about seeing each other's humanities, empathizing with one another, and telling stories on our own terms," said Leung. "From queer and feminist perspectives, Women invites everyone to imagine a future that is radical and boundless."

Women: From Her to Here will be on display until August 28. Mask and social distancing protocols will be in effect, and admission is free. Gallery hours are Tuesdays-Saturdays from 10am to 4pm.

In addition to Women, the Chinese Culture Center of San Francisco will host a free online screening of the feature length documentary Shanghai Queer on Friday June 18 at 6pm. The film (with English subtitles) tells the story of the development of the LGBTQ community in Shanghai from 2003-2018, and features interviews with activists, artists, directors of support groups, and scholars from the Chinese gender equality movement.

The film begins with an incident in which Sina Microblog, a social networking site in China, banned all mention of homosexuality. The community responded with a boycott. The film tells the community's story from there and includes tours of local queer spaces.

Several interesting people speak: a trans woman who was rejected by her father, and three older men who recall the club that they used to attend. Interviews such as these bring the city of Shanghai to life. The screening will include a panel discussion.
www.cccsf.us