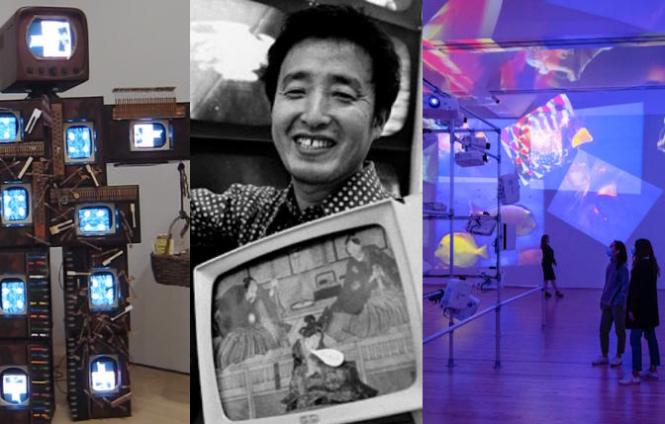 San Francisco Museum of Modern Art's new retrospective of more than 200 works by celebrated multimedia artist Nam June Paik is not only absorbing and historic; it's also a lot of fun.

As we ease from binge-watching TV shows online and Insta-scrolling on our phones, this first U.S. retrospective of Paik's major works provides a perfect segue, full of television monitors set up in unlikely places and positions.

Paik (1932-2006) was a pioneer since the early 1970s when he coined the term "electronic superhighway." Born in Seoul during the Japanese occupation of Korea, Paik lived and worked in Japan, Germany and the U.S. Trained as a musician, his fascination with electronics led to his hybrid interest in making art that combined both.

Since his first solo exhibition in 1963, he broke new ground with the use of video as a major component in his works. Half a century later, his art reflects the multimedia video screen excess of our daily lives.

Organized by SF MOMA and the Tate Modern, London, with additional presentations at the Stedelijk Museum Amsterdam and the National Gallery Singapore this year, the retrospective will be the first major Paik show in the U.S. in more than two decades. It's also the first ever large-scale survey of his work on the West Coast.

"Nam June Paik is famous for being the historic father of video art, but his groundbreaking and contemporary influence is even more based on his crossover between all media," said Rudolf Frieling, curator of media arts at SFMOMA. "Paik's radical visual and musical aesthetic has a natural home here on the West Coast as a place for global connectivity." 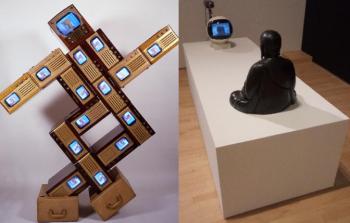 Along with offering new perspectives on his cultural traditions (TV Buddha, 1974, in which an 18th-century Buddha sculpture watches himself on TV watching himself...), Paik infuses a sense of wit and humor, even irony, to his art. Some of his earlier works like Zen TV were inspired simply by a faulty television monitor turned on its side to imply infinity and nothingness.

Many of the videos, embedded either in a garden of ferns or inside robot sculptures, harken back to the days of early cable-access channel programs, with low-tech green-screen dancers edited with pop music and repeated sound effects.

Become beguiled by the large scale projections of his Sistine Chapel, a cascade of sounds and images (warning: flashing lights and brief nudity) along with segments of Allen Ginsberg chanting, and Janis Joplin singing, as the dazzling display on white walls —at first overwhelming— eventually becomes almost soothing.

One room is devoted to the ephemera, objects and video recordings of Paik's work with collaborator Charlotte Moorman, a classically-trained cellist who varied her performances, from immersing in a tank of water to playing Paik himself as if he were an instrument.

SF MOMA will be limiting attendance, so make a reservation and enjoy the solitude of sitting on one of many benches, particularly in the dark room setting for TV Garden (1974-77/2002) where a multitude of video images blossom amid green plants. 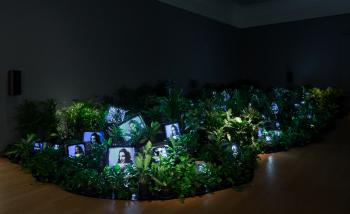 Yet the similar dissonance of his own audio scores in certain sculptures and videos may seem quite melodic to a modern audience. An example: Manon-Liu Winter and Michael Krupica perform on a 2008 video while playing a deconstructed upright piano; the tape is installed next to the actual piano.

In music, dance and art, the influence of Zen practice elements of chance had come to the forefront as a creative process for his colleagues as well as Paik, whose work sometimes visually reflects that, while at the same time giving a respectful nod to his Korean family roots.

1991's Chongo Cross combines a dozen shelved video monitors that show Paik walking outdoors dressed a culturally historic figure in Korean culture, with intercut video shots of his father. On the floor below the video cluster, wooden braces and a collection of silver bowls imbue the work with a ceremonial tone.

My personal favorites in the exhibit are the robot series, including John Cage Robot II (1995), which includes attached ephemera from the composer himself, and Merce/Digital (1988), an angular series of vintage television consoles made to resemble a dance pose, with Cunningham himself on tiny video monitors inside the sculpture. That the two sculptures inhabit the same room in this exhibit is no coincidence; Cage and Cunningham were art and life partners for decades.

Related to these works, the museum's online film series Dances for Camera: Nam June Paik, Merce Cunningham, Charles Atlas will stream on the museum's website from June through August.

Interaction without touching the artwork is possible in several works, including the video and film projectors where a selfie is not only welcome but feels obligatory. Just don't touch the lit candles or the hard-boiled egg!

For more online viewer-participant fun, visit the museum's website to play with the scores of Video Commune and Electronic Opera #1.

As we ease back from being inside to going out to enjoy art, the art of Nam June Paik provides an enlightening plugged-in bridge.

Spring has sprung at SFMOMA

Museum at Home with the California Academy of Sciences