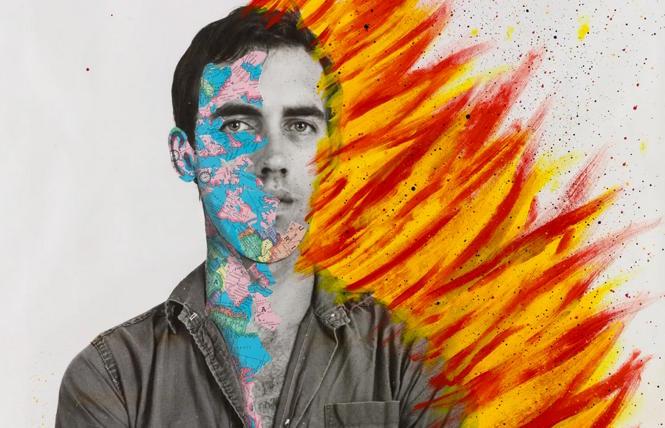 "When I contracted AIDS, I contracted a diseased society as well," is the opening quote from the new searing documentary Wojnarowicz: F**k You F*ggot F**ker, playing at the Roxie Theater and to be released May 18 on DVD by Kino Lorber. This remark epitomizes Wojnarowicz as the quintessential outsider, a vantage point that allowed him to be a scathing iconoclast as artist, cultural critic, writer, musician, photographer, and filmmaker.

Often grouped together with his queer contemporaries Robert Mapplethorpe and Keith Haring, all AIDS casualties, Wojnarowicz was a unique interdisciplinary multi-media boundary-breaking activist for whom art and politics was inseparable. Wojnarowicz, the fiery, uncompromising, provocative individual was as much his artistic creation as any painting, essay, collage, image, or video he generated.

Directed by Chris McKim and produced by Fenton Bailey and Randy Barbato's World of Wonder, by using an exhaustive archive of materials including artworks, diary entries, super 8 films, music recordings, photographs, letters, audio cassettes/tape journals, interviews, answering machine messages, and monologues, the film offers a patchwork foothold into Wojnarowicz's mind, as if he's narrating from beyond the grave. Through its ingenious use of animation and graphics brilliantly edited by Dave Stanke, it almost seems we are watching one of Wojnarowicz's art exhibitions spring to life. 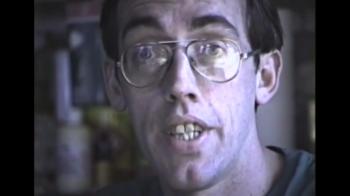 videotape of Wojnarowicz in the film

True Punk
Wojnarowicz experienced a brutal childhood in New Jersey with an abusive alcoholic ex-Merchant Marine father who beat him with two-by-fours and chains. He escaped with his emotionally unstable mother to Hell's Kitchen and made ends meet by gay street hustling in Times Square.

He commenced his renegade art career by wearing a mask of the transgressive poet/idol Arthur Rimbaud, posing and having himself photographed throughout the decaying NYC. He made stencil drawings and collected bloody cow bones from the meatpacking district (which was a notorious junkie and gay cruising area) throwing them on the stairs at the Leo Castelli Gallery, divulging his rage at the moneyed pampered art establishment.

He started performing with his punk rock band 3 Teens Kill 4 (whose songs comprise the movie's soundtrack) sampling street sounds as part of the music producing what one band member recalls as a "film for your ears."

He instigated uninvited guerilla action installations at an abandoned rotting West Side pier in the Hudson River by incorporating scavenged objects, debris, and trash into his work. He summoned other artists to display their creations in what morphed into a communal art space, eventually demolished by the city.

He found a discarded homophobic graffiti note, "Wojnarowicz: F**k You F*ggot F**ker," which became the documentary's subtitle, but which he integrated into a sensual collage of two naked men kissing in the ocean, which he sold to curator Barry Blinderman.

He began to be noticed by the art world, exhibiting in galleries like Gracie Mansion and the Whitney Biennial, even securing some well-paid commissions. The most hilarious moment in the documentary occurs when he was asked by the rich patron former Goldman Sachs trader Robert Mnuchin (father to Trump's Treasury Secretary Steven Mnuchin) to install an art piece in his basement. Wojnarowicz prankishly used rotting street garbage to construct it, infesting his home with cockroaches.

David met his artistic mentor Peter Hujar with whom he had a brief tryst but soon became his soul mate. Hujar encouraged his artistry, told him not to discard his work, and insisted he kick his heroin habit. Hujar was diagnosed with AIDS early in 1987 and died before the end of the year. 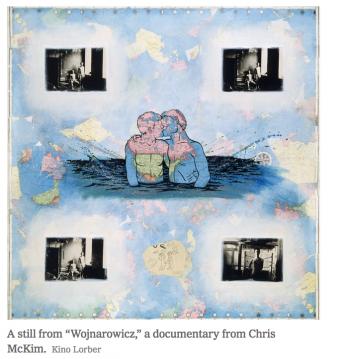 one of many art works in the film

Wojnarowicz took celebrated photos of Hujar's dead body lying in his hospital bed to indict the unnecessary vicious deaths from AIDS "because fags, dykes, and junkies are expendable in this country." In the mid-1980s he met social worker Tom Rauffenbart, who remained his partner until the end and was interviewed before his death last year.

In 1988 Wojnarowicz was diagnosed with AIDS and joined ACT UP to protest Reagan administration policies and indifference against PWAs. He designed an iconic jacket with the lettering: "If I die of AIDS, Forget Burial, Just Drop My Body on the Steps of the F.D.A.," which became a rallying cry.

Invited to participate in the Witnesses Against Our Vanishing for the Artist's Space exhibition in 1989/1990, Wojnarowicz became a target of right-wing outrage. The National Endowment for the Arts withdraw their financial support (later restored) and the American Family Association's Donald Wildmon claimed 'obscenity,' and sent out a pamphlet featuring selected snippets of Wojnarowicz's crude imagery and statements from the catalog. Wojnarowicz sued him for misrepresenting his spirituality and art, winning $1 in damages.

Desert song
In his final year he took a road trip through the Southwest to gather material for a series of unfinished experimental films, but produced a famous self-portrait of his face buried in sand. The rock band U2 used his "Untitled (Buffalos Falling Off a Cliff)" photograph as the cover art for their hit single "One," raising millions for AIDS research. Wojnarowicz died in July 1992, aged 37.

Reflecting on Wojnarowicz's legacy today, Blinderman says, "I think a lot of the reason David is important now is because people recognize an emergent queer sensibility in David: "I'm not gay as in 'I love you," I'm queer as in "fuck off."

Most of his images such as ants crawling on a crucifix, Jesus with a hypodermic needle in his arm, or his bloodied mouth sewn shut, have political ramifications, questioning what constitutes art and the role of art as performance or dissent.

One of the few drawbacks of this otherwise riveting documentary is not focusing more on the artwork and assessing how well it stands up thirty years later. Also, the frenetic breakneck pacing makes it arduous to absorb all the contents, and this is one film that benefits from repeat viewing.

Many of the questions and issues raised by Wojnarowicz (i.e. universal healthcare) are as relevant today as they were three decades ago. Wojnarowicz is a pulsating elegy of what might have been, but what remains is an incendiary fearless heroic revolutionary, whose anger (never cynicism) and passion were channeled into his work with the hope there would one day be equality and justice for all LGBTQ people.

The heart of a hustler: David P. Wichman's 'Every Grain of Sand'