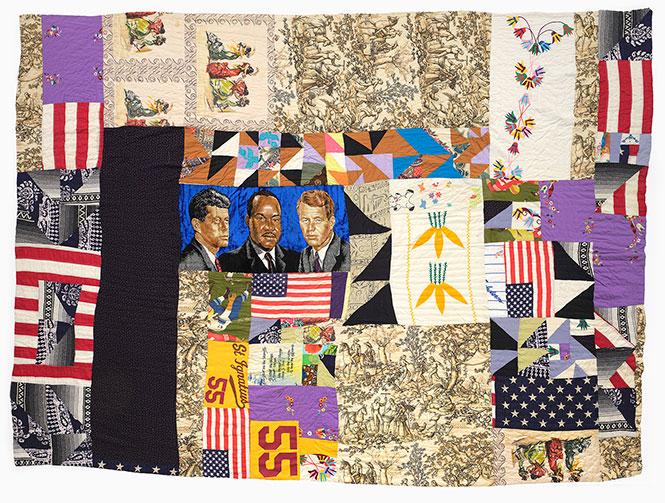 Considered one of the most accomplished, artistically inventive American quilt-makers of the late 20th and early 21st centuries, Rosie Lee Tompkins deserves an appreciative retrospective, and a comprehensive new show at BAMPFA demonstrates why. It showcases nearly 70 vibrantly colored, often irregularly shaped quilts, dating from the 1970s to shortly before her death in 2006. Of note is that, for the most part, other artists did the actual quilting. It was Tompkins who created the snazzy piece tops or uppermost layers and hand-sewn applique and embroidery for abstract, tactile textiles you'll feel tempted to take home with you. Most of them wouldn't readily fit on a bed, and with no fixed orientation, they're closer to modernist paintings that should be hung on the wall, marveled at and spot-lit, as they are in the museum's roomy galleries.

Born Effie Mae Howard in 1936, Tompkins grew up, one of 15 children, in a rural sharecropping family in southeastern Arkansas. Though she learned to quilt from her mother, she didn't take up the art seriously until 1980, over 20 years after she had moved to Richmond, CA, where she made her living as a nurse. In some respects a radical departure from the Black Southern quilt-making legacy passed down to her, Tompkins' Modernist works exude what The New York Times rightly called "a barely controlled geometric anarchy." 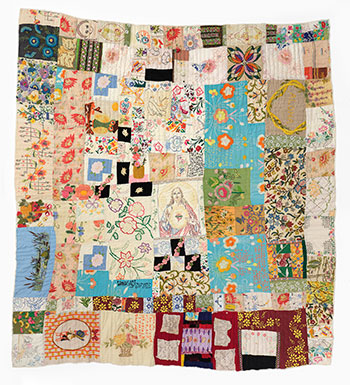 A deeply private, spiritual woman who wove personal symbolism, quotations from Scripture, and references to relatives into her quilts, she believed her talent was a God-given gift. One can almost picture her lost in concentration, a raft of found materials spread out on her living-room floor, as she orchestrated a symphony of colors and swatches of eclectic fabrics for sophisticated, intricate compositions filed away in her head. More improvised than planned, her projects, with their inherent discipline and free-form spirit, bear a kinship with jazz. She was known to listen to "Saturday Night Fever" and opera. Would it be a stretch to imagine her soaking in the jazz greats?

A few works touch on political themes of the day, like a large-scale 1996 quilt with images of the Kennedy brothers, Martin Luther King, Jr. and portions of the American flag. Another from the same year features a shadowy OJ Simpson, crucifixes and Biblical passages. But what strikes one most are the beyond-vivid, killer colors. Midnight-blue velvets structured in a uneven square medallion pull the eye into untold depths, while in "String" (1985), one of the few titled pieces, curved burgundy and red ropes, arcing in parallel lines like a network of highways, produce a ripple effect, accented by startling patches of scarlet or coral, and seamlessly integrated profusion of purples.

Tompkins had a remarkable knack for combining lustrous fabrics that catch the light, many of them finds she uncovered on treks to local flea markets and thrift shops. There are plush velvets, velour and velveteen, a generous sprinkling of glitter and sequins, scraps of old denim deployed to sweet, almost childlike effect, and glistening metallic finishes achieved for a festive group she called Christmas quilts.

Though her religiosity is often front-and-center, Tompkins possessed a joyous, witty touch. In a 2003 quilt, re-purposed striped neckties, arranged against a contrasting black background, look like refugees from an after-hours display in Macy's men's department. That playfulness also expressed itself in a piece comprised of 68 yo-yo shapes made of corduroy, terrycloth, embroidery and cotton bedding in a dizzying array of hues. They're thought to refer to birthdays of the artist's family members, but I couldn't help thinking of the mouthwatering choices at an ice cream parlor or a spontaneous gathering of party balloons.