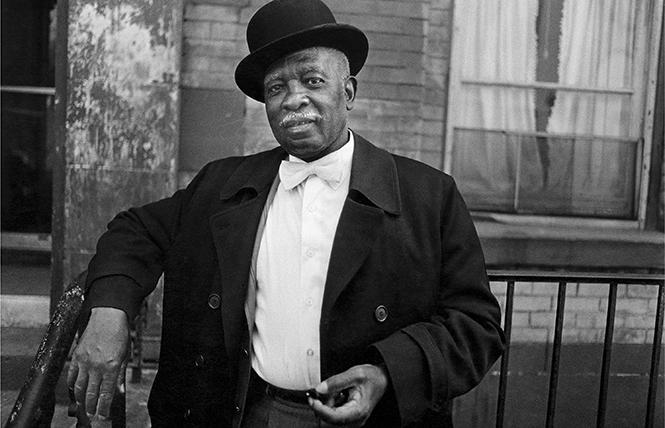 African American photographer Dawoud Bey was just 15 years old when he got his first camera. But it was after seeing "Harlem on My Mind: Cultural Capital of Black America," a controversial 1969 exhibition at the Metropolitan Museum in New York, that he discovered the possibility of a career in photography. In 1975, at the age of 22 and largely self-taught at the time, he embarked on his own take on the neighborhood where he had roots, "Harlem U.S.A." The series of portraits, shot over a three-year period with a hand-held camera, announced the arrival of a dazzling new talent on the scene. Followers of photography will no doubt have spotted Bey's affectionate pictures of Harlem residents, like the kid in aviator shades, a cool customer with attitude who planted himself in front of the box office of the Loew's 125th St. Theater in Harlem; or the dignified gray-haired gent in a bowler hat and white bow tie standing in front of his home. During the next 45 years, Bey's exquisite, downright sensational black-and-white photographs have captured the humanity of black subjects, communities and histories ignored by the mainstream art world.

Now the master photographer, who grew up in Queens and is based in Chicago, has a major retrospective to call his own. "Dawoud Bey: An American Project," co-curated by Corey Keller, opened at SFMOMA last week, and it's a winner. Bey brings an admirable combination of artistry, rigor and empathy to his work. In his black-and-white images, he frequently achieves a degree of perfection exemplified by a modest, small-frame picture shot in 35mm in Syracuse, New York, where two teenage boys in sneakers and nearly fluorescent white T-shirts take a breather on a city handball court. One wouldn't wish it changed in the slightest. 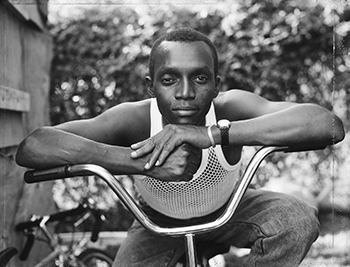 The show also features large-format, lushly toned color portraits of people of color, including adolescents, who are often stereotyped, misunderstood or overlooked by white culture. Working in the early 1990s with a 20x24-inch Polaroid camera, Bey conveyed the individuality of the subjects within his frame and the internal conflicts that lurked behind theirs. A two-hour-plus shooting process and the artist's career-long ability to bond with his sitters likely enhanced trust. A similar sensitivity is evident in "Class Pictures," formal portraits of high school students photographed in empty classrooms, accompanied by short bios they wrote revealing their feelings of vulnerability. While technically proficient and an important vehicle for giving visibility to marginalized groups or urban neighborhoods losing their cultural legacy to "progress," Bey's color photography doesn't have the singular quality of his rich, sometimes stark, preternatural work in black-and-white, a medium where he's clearly in his element and most at home.

"The Birmingham Project" (2013) is a collection of diptychs that commemorates the 50th anniversary of the Ku Klux Klan's bombing of the 16th Street Baptist Church in Alabama in 1963. Bey paired children who were the same age as the four African American girls killed in the attack with adults who, in 2013, would have been the age of those children if they had survived, but photographed them separately in the same or different venues. The results, poignant and quietly powerful, reflect Bey's innate gentleness and recognition of harsh realities, which are a through-line in his work.

His latest project and perhaps his most poetic, "Night Coming Tenderly, Black," signals a further departure from portraiture and a growing interest in haunted landscapes. In these painterly nocturnes, which take their name from the final couplet of Langston Hughes' 1926 poem "Dream Variations," Bey summons the sites of the Underground Railroad in rural Ohio, a secret network, shrouded in myth and memory, that helped fugitive slaves escape. In particular, he imagines the final 50-mile stretch to Lake Erie and the Promised Land beyond its shores as a passage through enchanted forests fraught with danger. An homage to New York photographer Roy DeCarava, an early influence who embraced black light, the large-scale, profoundly moving, impressionistic images were photographed during the day and printed in gelatin silver on coated paper in dusky grays and blacks that seem to deepen before one's eyes. Ominous clouds gathering above the lake expanse, small clearings in the woods obscured by mist, and dense stands of trees vanishing under a cloak of darkness are captured at the fleeting moment between twilight and nightfall. The series evokes the terror of the unknown experienced by slaves fearing pursuit and recapture, and an exhilarating taste of freedom tempered by the literal and metaphoric difficulty of discerning the way ahead.

Bey is currently taking pictures on Louisiana sugar cane plantations, part of his continuing commitment to making the unseen tangible and the African American past resonate in the present. "Traumatic history hangs in the air and hovers over a place," he tells me. "You can't see the history; you have to make it felt."