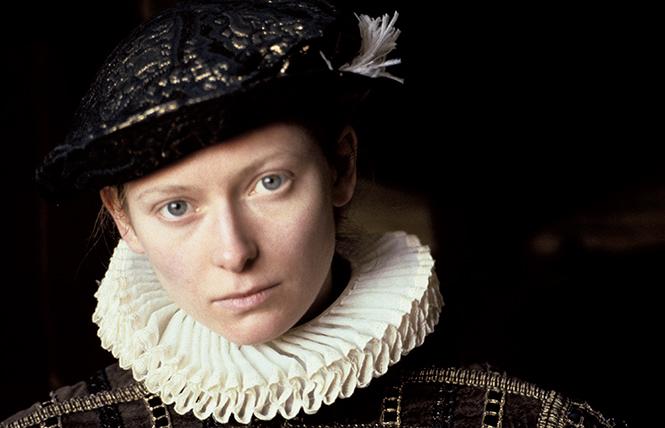 Preproduction image made by director Sally Potter to help secure funding for the film "Orlando," spring 1988. Photo: Courtesy the artist

"Orlando: A Biography," Virginia Woolf's slender, remarkably enduring 1928 novel inspired by the writer's love affair with the glamorous elusive aristocrat Vita Sackville-West, chronicled an eternally youthful nobleman's odyssey across time and continents. Shifting genders, courting lovers of both sexes, falling in love with a Russian princess and visiting with Jonathan Swift and Alexander Pope along the way, his journey begins during the reign of Elizabeth I and continues through three centuries of misogynistic British history, classism and tyranny of inherited wealth. The book was loosely adapted for a timeless 1992 movie directed by British filmmaker Sally Potter, who gave an androgynous, 30-something Tilda Swinton her breakthrough role. Nearly three decades later, the actress has returned the favor. She has curated her first art exhibition, a photography show named for "Orlando," a fable she has called a "wild goose chase of a fantasy" and a "magic carpet ride." Exploring not only gender — a word mentioned only once by Woolf — but transformation in a broad sense, the show includes 11 artists from different generations and some specially commissioned works. After opening last year in New York at the Aperture Foundation, it has landed at McEvoy Foundation for the Arts. MFA has expanded on the original exhibition, adding pertinent photographs from its own collection, which has a strong representation of female photographers and an emphasis on portraiture. Prime examples are Nan Goldin's luminous, ingeniously composed "Sisters" (2010), part of a project that incorporated the Louvre's classical paintings and contemporary images, and "Plastic Nude" (2016), where naked photographer Talia Chetrit posed with her camera aimed at the viewer, turning the tables on the male gaze in a "So, there!" moment.

The show is both intellectually provocative and visually stunning. The gorgeous pristine prints are impeccably installed throughout the gallery's expansive spaces, leaving plenty of room to engage and ruminate on concepts from impermanence and the constructs of binary gender norms to the open, "all fences down, all arms wide" world Swinton envisions. She invited friends who are practicing artists to participate; all but one accepted, and no wonder. Who could refuse a call for entries from Tilda? It didn't hurt that the source material, an uncanny mirror through which to view oneself and the idea of gender fluidity, resonates as if it were written last week. 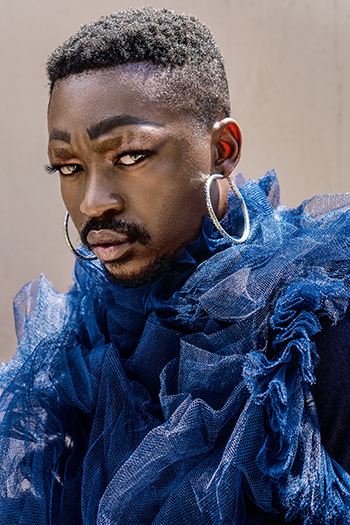 Lynn Hershman Leeson, with whom Swinton worked on five films including "Conceiving Ada" and "Teknolust," which MFA will screen April 4, was an inevitable choice. The Bay Area artist has long been interested not only in mutable gender but mutable identities. She famously developed Roberta Breitmore, a fictional alter ego with her own passport, credit cards and P.O. box. Breitmore's portrait appears here, as well as excerpts from "Hero Sandwich," a 1980s series that merged negatives of publicity photos of male and female celebrities. David Bowie/Katharine Hepburn and Bogart/Gena Rowlands hybrids are on view.

A fascinating section features pre-production stills of Swinton in period costumes shot by Potter at the 14th-century estate where Sackville-West grew up. Potter compiled the images, accompanied by text, into 100 handcrafted books, and shopped them to studio executives in hopes of securing funding for her film. She kept only one for herself; it's displayed in a vitrine, open to a page that ponders the nature of time. Swinton is beguiling in these pictures, demonstrating, as Potter intended, that the actress could be convincing as a male in fancy nobleman's garb or as an upper-class woman, captured here in a billowing dress, her head resting against a huge wooden door in one of the mansion's vast stone rooms. The beauty of Swinton's movie performance is that one doesn't see a man or a woman, one only sees her, validating Orlando's assessment of his newly transformed, naked body: "Same person. No difference at all. Just a different sex." A 35mm print of the film will be shown at the Roxie Theater on Feb. 25.

One wonders if a similar experience was shared by model Casil McArthur, whose transition from tomboyish girl to girlish boy was documented by fashion photographer Collier Schorr; the two met when McArthur had just begun a career modeling as a young man. For this archive of candid, strikingly intimate portraits, Schorr eschewed the trappings of a glossy magazine shoot. What remained constant was her astute eye and her subject's unattainability and gift for seducing the camera.

When it comes to seduction, no one can quite compete with gender-bending, sexual appropriation artist Yasumasa Morimura. The notorious shape-shifter, who has inhabited visions of Marilyn Monroe, Greta Garbo, Marlene Dietrich, Douglas MacArthur and Hitler, shows up in a 1996 self-portrait (from MFA's collection) as a fetching Liz Taylor, poised to make a grand entrance in a short French coiffure and clingy slip dress.

From a distance, African American artist Mickalene Thomas' suite of studio portraits, embedded in period wallpaper she designed, might be mistaken for Morimura's excursions. Influenced by Gauguin and Manet, her lush color prints, commissioned for the show, evince a yearning for transformation. In particular, they imagine Orlando's encounters with the ancient Queen Elizabeth I, who was infatuated with the poet's boyish beauty. Played by Quentin Crisp in the film, she's infinitely more nubile in Thomas' fantasia. Thomas dressed her chameleons, partner and muse Racquel Chevremont and performance artist Zachary Tye Richardson, in elegant gowns and suiting, elaborate wigs, jewels and crowns, and nestled them among pillows and greenery, tableaux of fluid sexuality that also reference the pageantry of a third-gender Samoan community where boys are raised as girls. In blurring conventional notions of identity — masculine, feminine and stations in-between — Swinton says that Thomas got to the heart of the matter. "Everyone is Orlando, that's the thing."