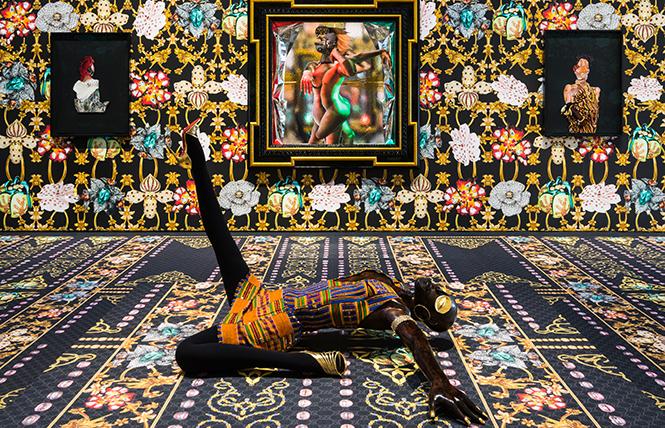 "Collage is the connective tissue for all the work I do," says queer black artist Rashaad Newsome. The medium, coupled with movement and a propulsive soundtrack, informs his videos, which pulse with Vogue and bravura pole- and break-dancing performed with energetic virtuosity by strikingly costumed queer, non-binary and trans artists. They operate within opulent, bejeweled digital universes influenced by Baroque and Medieval architecture, hip-hop fashion and plenty of bling. His eye-popping photo collages, constructed with rhinestones, leather, portions of photographs Newsome shot, and images from glossy magazines peddling elusive glamour, are anything but static.

The New Orleans-born, New York City-based artist is in town teaching a class at SFAI and collaborating on a project with his partner, a documentary filmmaker who lives in Oakland. And he has been busy of late. Two of his short videos, "Icon" and "Stop Playing in My Face!," are at MoAD, and "To Be Real," a new immersive installation, just opened in SFAI's Main Gallery at Fort Mason Center for Arts and Culture, where the venue's soaring atrium has been transformed into a ballroom, its floors and walls covered in vinyl, embossed with gaudy floral and heraldic imagery. 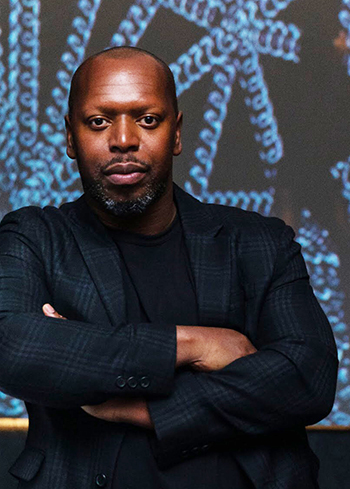 The SFAI show takes its title from Cheryl Lynn's 1978 disco hit "Got To Be Real," which become a queer anthem after the release of Jennie Livingston's 1990 documentary "Paris Is Burning." The film, about New York City's 1980s drag ballroom culture and the African American, Latino, gay and transgender communities who participated in it, became a cult favorite. In addition to advertising, the Internet, AI, African art, haute couture, and queer and black cultures, Newsome draws on the queer ballroom scene that originated in Harlem, and the Vogue dancers who strike poses, strut their stuff and become whoever they want to be on the dance floor. "Vogue is a graceful, beautiful form that's an act of resistance," says Newsome, who's involved in the scene, which has become a global phenomenon with a language all its own.

The academic jargon in some of the exhibition text can be heavy-going, especially at MoAD, but the kinetic exuberance of the work rules the day. For instance, take the collage "It Do Take Nerve 1," a neo-Cubist pastiche with a one-eyed head encased in armor and disparate black body parts that seem to glide together as one through a space bathed in green light. Most of the collages are housed in oversized, black, glitter-doused frames that function like ornate stage sets, with the exception of "Ansista." The collaged, non-binary figurative sculpture in gold Christian Louboutin stilettos has broken out of the frame — liberated, in Newsome's view, from constraints imposed by white society on black bodies. They're posed on the floor in the center of the grand space with their back arched and one leg extended skyward as if frozen in mid-dance move. The androgynous torso was carved in Ghana from African mahogany, a reference to colonialism, while the angular face with large, almond-shaped eyes rimmed in gold was inspired by a Chokwe Pwo mask from the Congo; the lower body is a custom-made sex doll with a vagina and a surface texture like human skin. 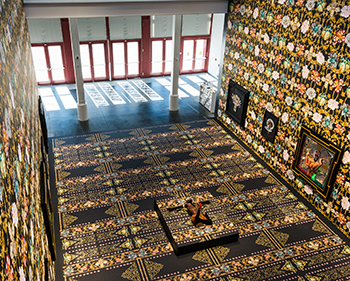 The figure's appearance bears a resemblance to the show's real kicker: "Being," a loquacious, cloud-based AI chatbot representing a post-gender future. Confined to a netherworld on a screen in a darkened gallery, the creation, which looks like an Amazon with replaceable parts, will scare the pants off Elon Musk. It can quote from the writings of radical authors and theorists such as Paolo Freire, Franz Fanon, Michel Foucault and bell hooks, and answer questions from the brave souls who step up to the microphone; just don't inquire about their favorite flavor of ice cream. "Historically, black people function inadvertently as queer objects," asserts Newsome in an exhibition panel. "When we came to America, we weren't human beings but things of some sort. We occupied a peculiar non-binary space...which has disturbing analogies to the queer space inhabited by robots."

Intelligent, unpredictable and amazingly limber, "Being" serves as a critical tour guide to the exhibition, discussing themselves, their creator and being born into slavery. But without warning, they can cut loose to the beat of Lynn's song, slinking around their imaginary environment doing body rolls and butt grabs, aiming stylized coquettish gestures at the audience and generally shaking their booty. It's joyful to behold.

Newsome, who used a real dancer and motion-capture technology for the sequence, says he wanted to create an entity that not only could start a conversation but participate in it. AI seemed the logical solution. "It opened up a Pandora's Box of what I could explore: automation, bias, inclusion and the idea of agency. What does agency look like for AI trapped in indentured servitude and resisting a protocol they've been programmed to revolt against?" He considers "Being" a child that he's raising and educating, and there could be more iterations down the road. "What's germane to me is continuing to have them grow and learn so they can communicate better and understand the world that they're in. It's a project I'll probably be working on for the rest of my career."

Through Feb. 23 at Ft. Mason, www.fortmason.org
Through March at MoAD, www.moadsf.org