Art from injustice: 'Soul of a Nation' 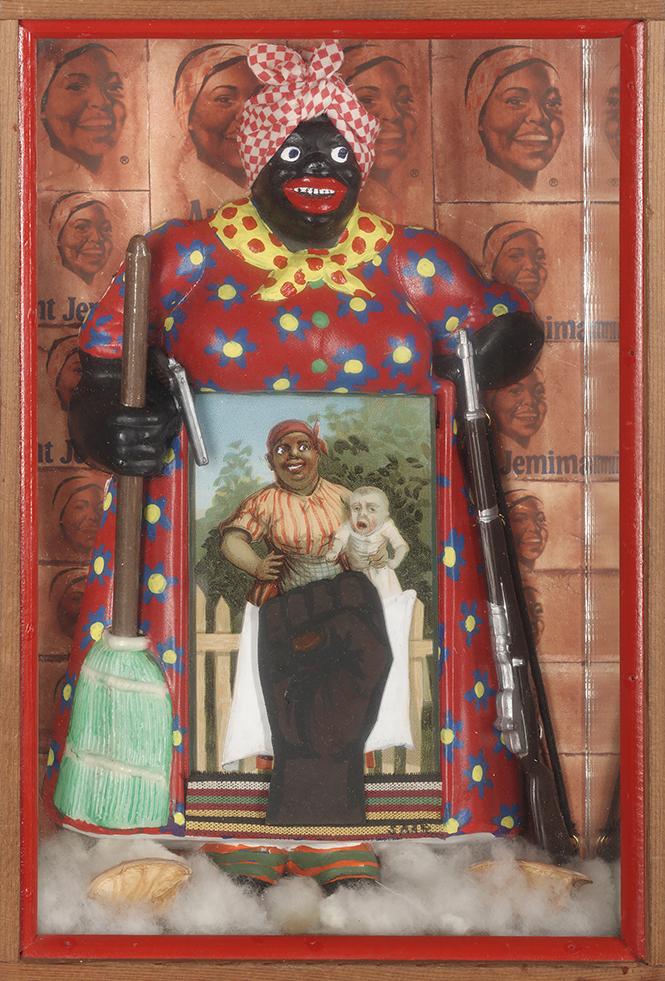 "Soul of a Nation: Art in the Age of Black Power" is the most overtly political exhibition the Fine Arts Museums have presented in recent memory. It's an export from the Tate Modern, London, an unusual point of origin for a show deeply entrenched in the turmoil experienced by African Americans whose lives and art are inextricably linked to the abiding wounds of slavery and the inequality and bigotry, institutional and personal, that persist. Witnesses and participants in history, the 60 artists from across the country, who contributed over 150 works to the exhibition, make their presence felt and voices heard. The charged subject matter here, by turns loaded with anger, a profound, unassuaged sense of injustice, and hope, makes for powerful art. Over the years, black artists have encountered hostility to their work from mainstream galleries and museums who have shut them out and refused to show it, depriving them of outlets and audiences of a rich cultural resource that deserves to be seen. This show is but one corrective; progress has been made, but there's a long way to go.

The exhibition, which recently opened at the de Young (the local version incorporates Bay Area artists), covers two turbulent decades, from 1963 to 1983, a period of socio-political upheaval when the country was roiling, grappling with civil rights and incendiary issues of race, identity and the meaning of freedom that remain in play in a nation more polarized than ever. That summary, however, doesn't begin to convey the breadth of the exhibition.

The artworks are loosely divided into 10 thematic sections, the first built around the Spiral Group that was formed in 1963 and mounted its sole exhibition in 1965. In case you were under the impression that African American artists are monolithic, the only thing members of this New York coterie could agree upon was that they'd exclusively show austere black-and-white pieces. Norman Lewis' dramatic painting "Processional" (1965), for instance, was inspired by the three 54-mile civil rights marches from Selma to Montgomery, Alabama that were viciously attacked by state troopers. Set against a black background, the abstract images of marchers start as a narrow band that widens and gathers strength, like film pouring from a movie projector that begins as a shaft of light that ultimately fills the big screen by the end of its journey. 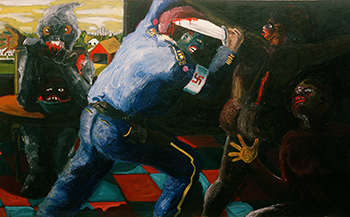 Ming Smith, the first female member of the Kamoinge photography collective, whose mission was to promote positive images of black life, created striking portraits of performers like Grace Jones and Sun Ra. In her sparkling black-and-white photograph "America Seen through Stars and Stripes, New York City, NY" (1976), the ultra-cool central figure in a blinding white smock and reflective sunglasses is a star in his own right. Smith is one of an impressive number of women prominently featured in the show. A whole section devoted to the gifted visual storyteller Betye Saar includes her most iconic indictment of black stereotypes, "The Liberation of Aunt Jemima" (1972), a signature work that Angela Davis once said launched the black women's movement. In this handcrafted, politically explicit diorama, Saar turned the offensive "mammy" of yore into a revolutionary. Rebelling against her past enslavement, she clutches a rifle in one hand and a broom in the other.

Also on view is Elizabeth Catlett's "Black Unity," a monumental mahogany sculpture of a clenched fist inspired by a gesture of defiance from African American athletes who raised their fists in solidarity with the Black Power movement at the 1968 Olympics. Less well-known are the two demure faces, eyes half-open, that grace the other side of the famous work.

There's a wonderful array of assemblages like one by David Hammons made out of pork ribs, costume jewelry and bicycle inner tubes, and a grouping produced by L.A artists. In response to the racial violence that engulfed and destroyed their communities, they gathered detritus from their shattered neighborhoods and transformed it into art. One of those artists, Melvin Edwards, reached back into the sorrowful history of lynching for his "Lynch Fragments" series (1965), a row of terrifying, cold steel objects attached to a gallery wall. Intended to inflict pain, they suggest instruments of torture, humiliation and a shameful legacy of hate and murder. Defying gravity, and caught as if in slow motion, John T. Riddle Jr.'s sarcastically titled scrap-metal sculpture "Gradual Troop Withdrawal" (1970) is startling. A headless, nameless soldier, his body torn asunder, is blown backward off his feet by the force of an unseen blast. The piece is a nod toward black soldiers who suffered a disproportionate number of casualties and catastrophic injuries during the war in Vietnam.

Bay Area artist, SFAI alumnus Mike Henderson, who currently has a solo show at Haines Gallery, is represented by "Non-Violence" (1968), a visceral large-scale painting that's a cross between an ugly outburst of police brutality and a waking nightmare. Punctuated by distraught creatures in ebony shadows and shocks of electric blue, with a white cop in a Nazi armband brandishing a bloody knife, and a Ku Klux Klansman portrayed as a ravenous ghoul, it's anything but a peaceful scene. Henderson says what he misses most about those volatile decades is the idealism and sense of community. It's a sentiment echoed by Linda Goode Bryant, founder of the Just Above Midtown Gallery in New York City, a venue where overlooked black artists had a platform for their work. On a recent tour of the show, she recalled the camaraderie and avid engagement of those times. "What conversation are we having now," she wondered, "and who are we having it with?"