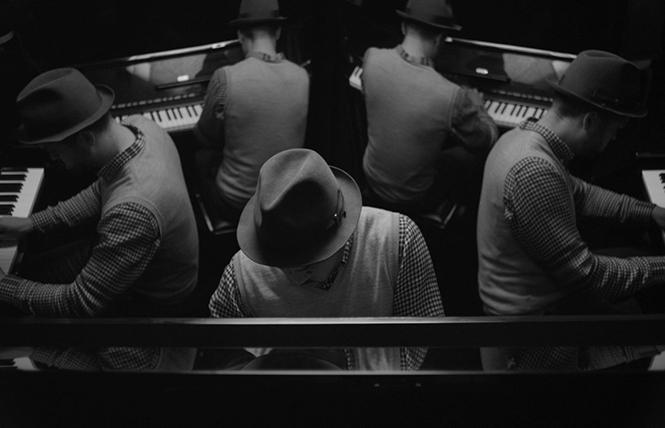 The highlight of Out There's recent jaunt to New York City was an artistic encounter with the MacArthur "genius grant"-winning jazz pianist and bandleader Jason Moran. We're a big fan of his work. But our encounter with Moran didn't happen at a jazz club or a concert hall, we found it at the Whitney Museum of American Art, where "Jason Moran," the first solo museum survey devoted to the jazz artist, is on display through January 5, 2020.

Moran is a musical and conceptual artist who has always collaborated with visual and performance artists, and the centerpiece of the exhibit is a set of video screens that show over two hours of Moran performing with esteemed artists from the visual or theatre worlds like Joan Jonas, Theaster Gates, Kara Walker and Lorna Simpson. Sounds of Moran's pianism waft enticingly through the gallery. But the visitor is also attracted to the show visually, by a three-part installation entitled "STAGED" (2015). 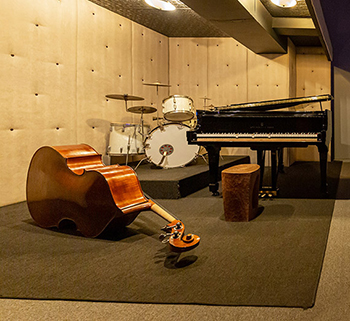 These are three large-scale dioramas that meticulously recreate, in the form of so-called "stage sculptures," the bandstands of three famous music venues that figure large in the history of jazz and the blues: Slugs' Saloon in New York's East Village, the Three Deuces in Midtown, and the Savoy Ballroom in Harlem. These re-fabrications are also the staging points for some actual live performances during the show's run, a program appropriately called "Jazz on a High Floor in the Afternoon." The baby grand in the re-creation of the Three Deuces stage is programmed with a player-piano roll, so that it plays itself. Each stage is complemented by a display of photos and souvenirs scavenged from its famous club. It's a brilliant art idea: we re-create architecture all the time, why not bandstands?

Music, architecture, art, design, art-making, video, installation, and performance: this truly is an interdisciplinary show, and it points the way forward to ways that contemporary art museums may consider many different kinds of art practices for display and education. Moran's artistic exploration is also represented by a series of drawings he made by covering a piano keyboard with paper, coating his fingers with charcoal, and tickling those ivories. The results look something like rubbings of ancient gravestones, the shapes of the black and white keys appearing ghostly through the charcoal scrim. The drawings are named after the titles of the pieces Moran played while making them, so that they function as a sort of visual documentation of musical practice.

The old Whitney Museum building in Midtown, designed by Marcel Breuer, has been taken over by the Metropolitan Museum of Art. The new Whitney Museum, designed by Renzo Piano, is a beautiful piece of modern architecture set down on the far West Side, at the end of the park-like walking path the High Line, and right beside the Hudson River. Its sparkling mass, its outdoor galleries, terraces and staircases match the water towers and industrial landscape of its surroundings, and enliven the old Meatpacking District, which is now filled with fashionable boutiques and restaurants. Some of us will miss the savage wilderness and urban squalor, and the sexual adventure of the old piers, but for most of humanity this is an improvement.