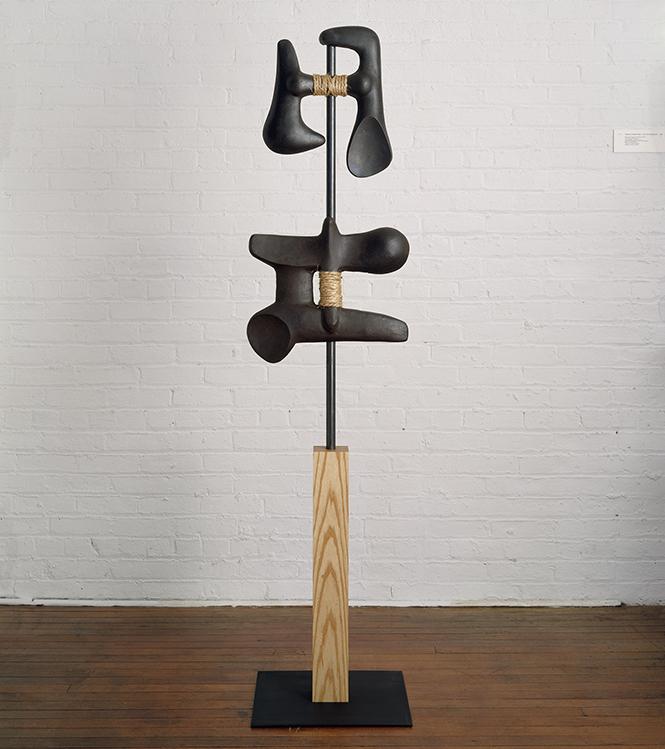 1950 was a very good year. It marked the auspicious meeting, in Tokyo, between Saburo Hasegawa, a painter, calligrapher and cultural philosopher known for his abstract, two-dimensional monochromatic artworks and experimental photo collages, and sculptor Isamu Noguchi, famous for lighter-than-air, handmade-paper Akari lamps and his arresting stone, wood, ceramic and metal sculptures. Their brief, intellectually stimulating friendship and how it informed their art practices and the intersection of Japanese aesthetics and mid-century modern art underlies "Changing and Unchanging Things: Noguchi and Hasegawa in Postwar Japan," a new exhibition at the Asian Art Museum. Bringing their work together, if not exactly into conversation, it spotlights a remarkable number of quietly spectacular artworks produced for the most part during the decade following WWII. Though the pairing of the artists and their respective works is not intended as a competition, comparisons between them are inevitable. The philosophical, more cerebral Hasegawa may have been the superior theorist, but Noguchi steals the show.

Both in their 40s and well-established in their respective careers when they met, the two erudite men shared an interest in the roots of Japanese art and culture and European modernism. Each had been exposed to the devastating loss and isolation of war, experiences that prompted them to reflect on the role of art in the world. The Japanese-born Hasegawa was pilloried for his pacifism in his native country during WWII; Noguchi, who was living in the U.S. in the 1940s, volunteered to be imprisoned in an internment camp in Arizona, where he spent seven months alongside fellow Japanese Americans. After the war he traveled extensively, sojourning to Egypt, India, Thailand and Indonesia before visiting Japan, where he was feted and treated as a celebrity. It was there that he engaged his new friend, Hasegawa, who became a major figure in his life and a guiding light in matters of cross-cultural pollination and the fusing of old and new.

Hasegawa had grown up in London and went to Paris in 1929, where he mingled with the literati and European avant-garde. An oil painter with an esoteric literary bent, he tangoed with Fauvism before pursuing abstraction in a variety of mediums. Looking forward without forsaking his heritage, he cultivated ancient Japanese traditions as a resource for ventures in modern art. In 1955, he relocated to San Francisco. (He once had a show at the now-defunct Gump's when the store had a gallery.)

Hasegawa is represented here by an array of rarely seen photograms, poetic scrolls that incorporate his interests in poetry and music, and fluid ink-on-paper and rubbing artworks reminiscent of Asian landscape paintings. "Nature" (1952), a large, double-panel folding screen with ink-washed, abstracted geometric images, is like an oversized open book, its "pages" inviting one into a realm of mysteries.

Born to an American mother and Japanese father in Los Angeles, Noguchi lived in Japan until he was 13 and his family moved to Indiana, an improbable state that couldn't contain him. He set out for Paris, where, between 1927-29, he worked in Constantin Brancusi's atelier. Sculptures such as "Space Elements" (1958), an unmatched pair of white marble slabs that simultaneously seem to be falling away from each other and falling over, attest to the influence of both his mentor and Ancient Greece. Inspired by Brancusi's example, Noguchi turned to Modernism and a form of abstraction that emphasized materials whose weight and textures can be keenly felt.

If Hasegawa was considered a master of the "controlled accident" or chance, Noguchi was a magician of hard, seemingly unyielding materials miraculously forged into exquisitely balanced compositions. He could make a speckled triangular rock with slits ("Young Mountain," 1970), which could have been ejected from a volcano, come alive with possibilities; in less capable hands the object would have been merely a lump.

The man had a way with stone and a gift for combining the massive and the delicate, particularly when working in granite. "The Footstep" (1958), perhaps an impression left behind by a giant prehistoric beast or ancestor, has a small wooden plank on top of it shed from an (imaginary) overhanging tree. "Garden Elements" (1958), which speaks to Japanese landscape design and architectural salvage, looks like the ruins of a temple, or a chimney that was the sole survivor of a bombing. It's comprised of two hunks of granite: one a tall, irregular pyramid shape with a rectangular hole puncturing the structure midway up, the other a wounded building fragment tilting precariously on its side nearby.

A prominent teacher in the Bay Area whose lectures were attended by Marcel Duchamp and Franz Kline, Hasegawa's life was cut short by cancer in 1957. His primal final work, "Pure Suffering" (1956), produced a year before his death, is a wailing epitaph etched in calligraphy on a stretch of burlap. In Hasegawa's honor, Noguchi created the elegiac "Sesshu" (1958). Subtly referencing his dear friend's reverence for the 15th-century Zen monk and ink painter who gives the sculpture its name, it's fashioned from modulated aluminum sheet-metal. Crinkled, slatted and undulating, it calls up associations with airplane wings and the folds and cut papers of kirigami. "Mortality" (1959), thought to be Noguchi's nod toward the death of Brancusi that same year, is a towering cluster of carved balsawood pendulums that are like wind chimes made out of dinosaur bones, poised to sway in a gentle loft of air.